Below is the third of six parts of an article by John J. Dziak about the Islamic counterintelligence state.

The sources of contemporary Islamism are worth a brief examination before viewing the practice of stratagem in the Islamic tradition. What should come as no surprise is that militant Islam, or fundamentalism (itself a Western projection from its own religious experience), is not a recent product ushered in by the Muslim Brotherhood, the Salafists, or the Wahhabists of the Arabian Peninsula and al Qaeda. As already seen with regard to Jihad, Islamist militancy is inherent to Islam itself throughout its almost fourteen hundred year history. What the above movements, and states like Shiite Iran, are now advocating, is a return to the purity of the earliest periods of Islamic history to include Muhammad’s time, and other “good” eras such as the much touted Islamic golden age of the Middle Ages. Bursts of Islamic “puritanism” occurred throughout history including the long eras of its imperial success — as well as in its period of decline as exemplified by the later years of the Ottoman Empire. This may not be welcome news to Western secular elites whose universal frame of reference is Enlightenment rationalism. But it certainly should be part of the intellectual kit bag of intelligence and counterintelligence professionals.

Further, Islam, as a self-identified theocratic system, may be regarded as a political ideology rather than simply another confession common to the west in which separation of church and state is part of the creedal faith. It is an established system for the integrated governance and faith observance of all peoples according to the Koran. Ideally, the Koran must be learned by heart (which many believers do even if they cannot read or comprehend Arabic, the preferred tongue for doing so) and applied in a literal way. This is because according to Islam the Koran, directly revealed by Allah through the archangel Gabriel, contains all that is needed for this life, and therefore no interpretation à la Biblical exegesis is allowed or tolerated. If Islamic liberalizers or moderates are too vocal in an effort to “reform”, or “update”, or find a better application of Islam to the contemporary world they run very serious risks of being labeled apostates, thereby risking death. Moderates are doubly conflicted here: tinkering with the holy text is tantamount to questioning Allah’s given word thus risking charges of apostasy; to be an apostate invites retribution. Moderates throughout the Muslim world face not only the retributions of Islamists but from their governments as well. The majority of Muslims live in countries ruled by very oppressive regimes; even relatively moderate countries offer little protection from rigorous enforcement of Islamic law. Jordan, for instance, jailed editors for daring to reprint the Danish cartoons. Violence, therefore, is not only politically permissible but divinely decreed per the holy texts. A straightforward reading of the Koran and the Hadith (the traditions and sayings of the prophet) reveals that violence is condoned and advocated, and has been acted upon throughout Islam’s almost fourteen centuries of history. Today’s Jihadists certainly are no aberration from that tradition.
– – – – – – – – – 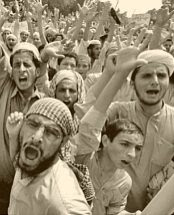 Additionally, Islam, like traditional Judaism, is an “orthoprax” (correct practice) faith placing “fundamental emphasis on law and regulation of community life.” Scholars in general view Christianity as an “orthodox” (correct opinion) faith wherein “greater emphasis on belief and its intellectual structuring of creeds, catechisms, and theologies”, is placed.[9] This is not an insignificant difference. In Islam religious debate tends to center on consistency of practice with fixed law, resulting in concentrated focus on Islamic law, Sharia. Legal interpretations are based on precedent that looks to the past and does not presume to probe the nature of Allah or his designs. Among Christians debate tends to focus on doctrine, hence the existence of clergy, hierarchies, and theologians to explore, discover, develop, debate, and explicate doctrine and liturgy — all in a presumptive urge to better grasp the nature of God through the operation of reason.[10] In Islam, the divine transmission of the religious text directly to God’s final prophet, Mohammed, fosters literalism, “the Scripture whereof there is no doubt.”[11] The Koran is the unmediated word of Allah; the Hebrew Bible and the New Testament are “inspired” texts, mediated through human agency and subject to interpretative discovery. When Jihadists invoke the sacred texts to justify violence either against fellow Muslims or the infidel, they can claim to be in a legally superior position to a moderate Muslim who must strain to adduce a countervailing argument based on the same texts. The latter is at a clear disadvantage.