Below is the second of six parts of an article by John J. Dziak about the Islamic counterintelligence state.

Part I is here. 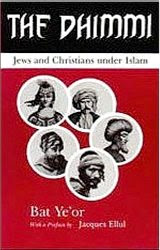 There are numerous facets of Islam’s almost fourteen centuries of imperial experience that could be linked to its practices of stratagem and the West’s response thereto. Two of these are highlighted as of special relevance to this subject: Jihad and Dhimmitude. The universal goal of Islam as handed down by Allah’s prophet Muhammad, was a global order in which all men recognized the rule of Allah as exemplified in Muslim rule, either as believers or as inferior subjects, i.e., Dhimmis. This was to be accomplished through “struggle [or striving] in the way of Allah”, later to become known as Jihad. Ibn Khaldun, the noted 14th-century Islamic jurist and historian put it thus:

In the Muslim community, the holy war [jihad] is a religious duty because of the universalism of the [Islamic] mission and the obligation [to convert] everybody to Islam either by persuasion or by force….Islam is under obligation to gain power over other nations.[6]

When attempting to mask the war context of “struggle in the way of Allah”, apologists for Islamic militancy insist that a personal interior struggle for goodness and self-improvement is what is meant. Islamist advocates use the same line on western audiences but clearly mean holy war when referring to Jihad to their Arabic listeners. And this tactic seems to be the most common deceptive technique in the public and diplomatic realm. But both the history of Islam and the justifications of the Koran and the Hadith leave no doubt that the doctrine of Jihad means that the relations between Muslims and non-Muslims are defined by war between two irreconcilables, the dar al-Islam (the land of Islam) and the dar al-harb (the land of war), or the non-Muslims. Jihad constitutes the Islamic ideology of peace and war. Universal peace in an absolute sense as viewed in the West is a non sequitur; only submission to Islamic domination produces a true stable peace. Peace, as viewed from London, Washington, or Berlin falls for Islam into the realm of passing and temporary truces, invariably encrusted in stratagem and dissimulation.[7] While Western commentators fixate on “peace”, Islam requires submission (which is what it means) — to Allah and, hence, to his earthly viceroys.
– – – – – – – – –
Dhimmitude, or the Islamic system of governing unconverted non-Muslim populations conquered by Jihad wars, entailed existence in a clearly subservient social status and political disenfranchisement including slavery, under predatory and humiliating taxes (e.g., jizya) and other forms of overt discrimination against so-called infidels. Over the centuries the severity of the system ranged between fairly benign patronizing, to the kidnapping of children and genocidal pogroms, and its net effect was to foster a Muslim arrogance to its non-Muslim minorities, which carries over to relations with non-Muslim nations. On the receiving side of Dhimmitude, an unease and defensiveness seemed to characterize Christian, Jewish and other minorities forced to live a tenuous existence if they elected not to convert to Islam. Dhimmi behavior ranged from, among others, servile submission, to elaborate deceptive practices to survive, to defensive emigration as in the cases of the Jewish Diasporas after the various Arab-Israeli Wars or as in the case of Christian emigration from the Palestinian areas and Lebanon — and now Iraq. It also has been noted by the principal scholar of Dhimmitude, Bat Ye’or, that a servile, fearful, and self-deceiving Dhimmi mindset seems to have been absorbed by some Western political and social elites in their dealings with contemporary Islamic minorities, groups, and nations in response to assertive and threatening Islamic behavior, whether domestic or international. The craven and hypocritical response to the Danish cartoon controversy by large segments of the media and academia as well as Western governments — the putative guardians of free speech — is a troubling indicator of just how far the servile psychology of Dhimmitude has advanced in the non-Muslim world. This has not gone unnoted by Islamic militants as witnessed by the adroit way they used the Madrid bombings to help bring down the Spanish government. Jihad and Dhimmitude are forged together in history.[8]

One thought on “Islamism and Stratagem, Part II”