Sweden goes to polls in a week, and the Sweden Democrats — opponents of mass immigration who publicly decry the Islamization of Sweden — are expected to enter parliament for the first time. The Swedish political elites are obviously terrified by the prospect of SD, and have ramped up the demonization and repression as the election approaches.

Needless to say, the official organs of the state are never involved in any of the suppression, intimidation, and violence. The establishment keeps its hands fastidiously clean, and sub-contracts the thuggery to non-state actors such as Anti-Fascist Action.

Reinhard of ICLA has a report about the sickening extremity of pre-election oppression in Sweden, and most egregiously what occurred late yesterday in Malmö.

Welcome to Sweden
by Reinhard

It is hardly an exaggeration to say that Sweden, while promoting its self-image of being the most tolerant and liberal country in the world, at the same time ruthlessly suppresses dissent, either by loud and persistent condemnations of everything that is considered to be even remotely racist, or by ignoring or downplaying physical attacks on people who are accused of being racists.

These condemnations and attacks are never more apparent than during election year, and never more so than this year, when Sverigedemokraterna (the Sweden Democrats) are poised to enter Swedish parliament for the first time. The Sweden Democrats are unique in that they are openly critical of immigration, multiculturalism and Islam, and have consistently garnered enough support in recent polls to indicate that they will indeed enter parliament in the elections next Sunday.

Their opponents are therefore out in force, and doing what they can do sabotage the Sweden Democrats’ chances of entering parliament — by any means possible.

These attacks can be divided into five different categories: attempts at election sabotage by tampering with their ballots; disruptions of meetings (which coincidentally is a crime against the principle of freedom of assembly, which is guaranteed by the Swedish constitution); threats directed at party officials; attacks on houses and property; and even attempted murder.

While these attacks are perpetrated by activists of the extreme Left, they are rarely, if ever, condemned by the same pundits and self-proclaimed guardians of Swedish morality who fill the pages of practically every newspaper in Sweden with reasons why all decent Swedes should vote for immigration-friendly parties, instead of the Sweden Democrats with their, as one pundit put it, “illegal opinions”.*

The following are examples of these attacks, and demonstrate that while Sweden may be the most tolerant society imaginable when it comes to immigrants, it is an absolute dictatorship when it comes to political dissidents.

SD set up a dedicated e-mail address which they asked voters to use if they saw evidence of tampering with ballots. After two days of advance voting, 34 complaints had already been filed.

The 34 most serious acts of sabotage include cases where election officials refused to display SD’s ballots, where SD’s ballots were completely absent from the election locale despite the fact that blank ballots with the party name marked in must be present in all locales. [Since SD have previously garnered more than 1 % of the vote in national elections, their ballots are distributed free of charge and must be present in all election locales.] Besides this there are reports of cases where all ballots have been stolen.

Besides the 34 most serious cases there are roughly a hundred reports of other parties’ ballots being placed in front of those of the Sweden Democrats, cases where the Social Democrats’ ballots have been mixed in with those of the Sweden Democrats or where SD’s ballots have been placed in a separate container beside those of the other parties, which threatens the election secrecy. [Swedish voters bring ballots with them into the polling booth. Having SD’s ballots in a separate location violates the principle of not being able to see what others vote for.]

The following video shows how election sabotage works. SD’s ballots have been placed behind those of the Social Democrats. The election official’s exclamation (at 1:24), “All the time!”, sums up the situation: this form of tampering is persistent. The video itself is self-explanatory.

There are many examples of this, but the most recent one was in Malmö, which is well-known as being both Sweden’s most multicultural city and a hotbed of leftist/pro-Palestinian extremism (thanks to Vlad Tepes for the subtitling):

The Swedish daily Sydsvenskan reports on the demonstration, which was cancelled by police due to leftist disruption. 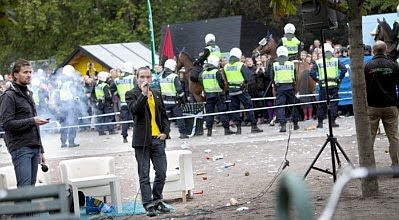 Kent Ekeroth, international secretary for the Sweden Democrats and an active member of the counterjihad, defies the extreme Left (Photo by Karl Melander, Sydsvenskan).

3. Threats against party officials
– – – – – – – – –
The Sweden Democrats have a long history of being targeted for physical assaults by the extreme left. The first step is usually threatening letters and phone calls. One such threat was recently received by Isak Nygren, a candidate for local council in Katrineholm. The threatening letter was signed by the Revolutionary Front, an organisation dedicated to fighting against what they call racists, fascists, and Nazis by “militant” means.

“This is a warning. We will only give you one warning. So think carefully about your next step. Pull out!”

The Swedish secret police, SÄPO, released a report in 2008, Hot mot förtroendevalda (“Threats against elected officials”), which describes the situation for SD officials:

Elected officials for the Sweden Democrats are subjected to extensive and systematic threats from the autonomous milieu. This includes violent crimes. The threats have led to several elected officials leaving political office.

Threats against elected officials from organised criminal milieus or other groups are rare. The Sweden Democrats are the exception to this. They are continually subjected to threats and actions from Anti-Fascist Action (AFA), or from persons using AFA’s symbols.

[Most threats are due to specific issues the politicians are involved in.] The motives are different when it comes to threats against the Sweden Democrats, where the main motive seems to be to make the politician leave political office.

The results of the study indicate that the Sweden Democrats are subjected to more threats than representatives from other parties. The frequency of reporting [threats] is deemed to be low.

4. Attacks on house and property

The next step is direct attacks on the homes, cars and property of SD officials.

The night between Friday and Saturday [September 3rd] a former Sweden Democrat candidate for local council in Mariestad was attacked by the violent leftist organisation AFA (Anti-fascist action). The attack consisted of a smashed car, several fist-sized rocks thrown in through windows and threats sprayed on the side of the house.

Marrlis Lundgren from Mariestad signed up for the Sweden Democrats as a candidate, but later withdrew her candidacy for personal reasons. In spite of this, she and her family were on Friday night subjected to a very serious attack from the democracy-despising violent organisation AFA. Marrlis’ son took the brunt of the attack in that all the windows of his car were smashed and it was through his bedroom window that the stones were thrown. AFA also left behind a threat aimed at the former candidate and her family:

“Think of your family, Marrlis! /AFA”

The threat was sprayed with large letters on the facade of the house.

The last step consists of direct attempts to murder SD officials. One such attack in March of 2010 was aimed at David von Arnold Antoni, who was subject to another attempt on his life yesterday, the 10th of September.

Malmö — A candidate for the Sweden Democrats was attacked Friday night in his apartment in Malmö. The police received an alarm at 20.42.

A man has been beaten in his apartment by two perpetrators. We’re labeling it illegal deprivation of freedom and assault, says the police commander in charge at the time, Lars Karsten. The intruders used a knife during the assault, according to the police. The man is said to be lightly injured.

The Sweden Democrats’ press secretary, Erik Almqvist, confirms that the victim is a representative of the party and that he is a candidate in the elections.

“It is unfortunately true.”

He doesn’t want to say right now which district the man is running in.

“I actually don’t want to go into more detail, first I want to talk to the person so that he’s OK with the situation.”

According to Erik Almqvist there is no doubt that the attack was politically motivated.

“Without a doubt. This will become readily apparent due to what’s happened. It’s definitely the most serious thing I know to have happened to a Sweden Democrat for political reasons.”

Bo Paulsson with the Malmö police reports that the man has been cut in his face with a knife.

“And when they left they took with them money and a computer,” he says.

The same evening, he was dragged into his apartment by two assailants who spoke a language “resembling Arabic” and threatened him, in “heavily accented Swedish”, because of his participation in the meeting earlier that day in Malmö. According to the Sweden Democrats’ press release, the perpetrators admitted to taking part in disrupting that meeting.

The police have confirmed that the perpetrators put up stickers from the organisation AFA, Anti-Fascist Action, an organisation which for many years has been known for using violence against those opponents whom AFA defines as being anti-democratic and belonging to racist organisations.

Aside from stealing money and a computer, they also used a knife to carve a swastika in von Arnold’s forehead.

So there we have it: an open meeting in a public square in Malmö was disrupted by the extreme Left and Middle Eastern immigrants, the latter of whom proceeded to track down one of the speakers, drag him into his apartment and carve a swastika in his forehead.

This is what happens to political dissidents in Sweden today. This is the reality behind the rhetoric of tolerance and diversity: if you challenge the multiculturalist orthodoxy, you will be tortured in your home by immigrants and quite possibly killed.

Welcome to Sweden, the most tolerant and progressive society in the world.