At the recent Al Quds Day demonstration in Berlin, Muslim protesters observed the holy month of Ramadan by calling for a “Jew-free Jerusalem” and giving Nazi salutes. JLH has translated an article from Politically Incorrect about the event, and also reports that Haolam has many excellent photos and a video:

Breaking the Fast With a Sieg Heil 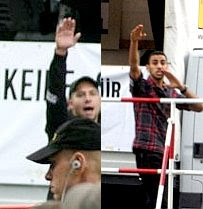 For a month, the Muslims have alternately starved and gorged to the point of throwing up, and at least in the second case received demonstrative visits from German VIPs. At the end of the Ramadan bulimia month, the Muslims demonstrate once more the beauty of their peaceful “religion” at “Al Quds Day” in Berlin. Al Quds stands for the Muslim dream of a Jew-free Jerusalem, after completion of the Holocaust. The Nazi salute is de rigueur.

According to media reports, about 300 Muslims heeded the call to an anti-Semitic demonstration, which was once ordered by Islamic dictator, Khomeini. Confronting them for first time this year was a larger number of pro-Israeli counter demonstrators. 500 people — twice as many as last year — were on the side of the street to stand up for Israel against the Islamo-fascists. A broad spectrum of Jewish, non-religious but also Left groups had invited members to a counter statement.

At the “Quds demonstration,” hate for Israel was called for in choral shouts and banners, the peace talks between Israel and the Palestinians were condemned and the violent regime in Teheran was exalted. During the demonstration, where various Islamist icons were raised high, there were repeated shouts like “s*** Jews.” As the extremists passed by the counter demonstration, one rank gave the Hitler salute in the direction of the demonstration.

And about the counter demonstration:

In speeches and choral shouts, both speakers and participants declared their solidarity with Israel. Especially Maya Zeden of the JFDA and Dr. Rafael Kornzecher of the coordinating council of the NGO against anti-Semitism noted Islamist aggression is directed not only against Israel, but against the entire free world. According to the speakers, it is not only a question of defending the only democracy in the Near and Middle East, but of defending also free democratic society and the Western value system, as well as introduction of human rights to Iran. Dr. Kazem Moussavi of the Green Party of Iran-Germany described the effects of daily terror practiced by the violent regime of the mullahs on the oppressed people of Iran. Rally leader, Jörg Fischer-Aharon (ADC Bildungswerk) emphasized in his greeting: “Solidarity with Israel also means solidarity with the right of self defense for the state of Israel” and “Jerusalem was, Jerusalem is, and Jerusalem remains the undivided capital of the state of Israel. That is the message, not only to those taking part in the Nazi-Islamist demonstration, but also to US President Obama.” Other speakers were Michael Spaney of Stop the Bomb, who spoke of the many connections of the German economy with the Iranian mullah regime, also the deputy chair of Bildungswerk, Daniel Fallentein, who spoke of the influence of anti-democratic and anti-Semitic hate propaganda from Arabic television on young people with an immigration background from Islamic lands.

It is not yet known whether prominent Left politicians took part in the anti-Semitic hate demonstrations, as they have in years past. It is certain at any rate that many a Berlin Wall murderer and Green graybeard were marching in their ranks in spirit.

2 thoughts on “Breaking the Fast With a Sieg Heil”