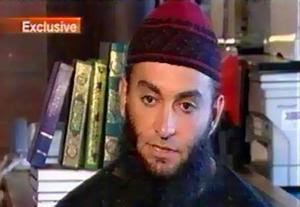 Geert Wilders has just learned that an Australian imam named Feiz Muhammad has issued a fatwa calling for the Dutch politician’s beheading. Our Flemish correspondent VH has translated a couple of Dutch-language articles on the topic, and includes additional material about Mr. Muhammad from various Australian sources.

Note: This incident has a Mohammed Coefficient of 100%.

[September 3, 2010] PVV leader Geert Wilders is angry at the Dutch Intelligence Service [AIVD]. The AIVD is in the possession of a sound recording on which Wilders is threatened with death by the imam Feiz Muhammad [an Australian Muslim preacher, head of the Global Islamic Youth Centre in Liverpool, a suburb of Sydney]. The politician however, had not been notified about this.

The PVV leader was yesterday informed in detail about the matter. Wilders says he is shocked, and last night consulted Eric Akerboom, National Coordinator for Counterterrorism (NCTb). “I urgently want to know why the NCTb and AIVD never informed me about this.” He also asked “what kind of consequences this has for me,” and called the recording “terrible”.

On the tape, which can be heard on the website of Dutch newspaper De Telegraaf, the Australian imam Feiz Muhammad urges Dutch Muslims to behead the PVVer.

The call comes from the Australian hate preacher Feiz Muhammad (40), who is viewed by intelligence agencies worldwide as one of the main jihadist ideologues, a great inspiration for young Western Muslim radicals. Sound recordings of this call are in the possession of Dutch newspaper De Telegraaf and the Dutch Intelligence Service AIVD. Feiz Muhammad made the call during a speech at a secluded site of jihadists, in response to questions by Dutch radicals: “We see the evil filth of people such as that filthy Dutch politician. Anyone who mocks our learning, laughs at the Islam and degrades it must enter death, decapitate him, cut off his head.”

Feiz Muhammad came up with this statement [fatwa — translator] after Dutch Muslims had asked him for advice. The imam is known in intelligence circles as a dangerous jihadist, equivalent to the US-Yemeni Muslim preacher Anwar al-Awlaki, who has links with Al-Qaeda [and is suspected of involvement in the Fort Hood-shooting by Nidal Malik Hasan and the failed attack on a plane from the Amsterdam to Detroit by Umar Farouk Abdulmutallab. Al Awlaki grew up in America and is now probably hiding in Yemen.].

Ronald Sandee, former employee of the MIVD [Dutch Military Intelligence Service] and Director of an American anti-terrorism organization, believes that “the call to murder must be taken extremely seriously”. 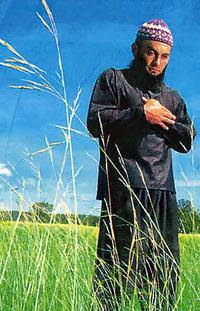 Feiz Muhammad, who was born in Sydney (ca 1970) but at present seems to be living in Lebanon, became notorious for telling his followers at a public meeting in Bankstown that “women who were raped had incited men’s lust by dressing immodestly [‘Strapless, backless, sleeveless, nothing but satanic skirts, slit skirts, translucent blouses, miniskirts, tight jeans’] and only had themselves to blame.” [source Sydney Morning Herald, 2005] He advocated “strict male and female segregation”.

In 2007 in the British television documentary Undercover Mosque it was exposed that Feiz Muhammad urged in videotaped lectures for children to become martyrs for Islam, and also mocked Jewish people as pigs. On the videotapes he calls on young Muslims to be prepared to sacrifice themselves for Islam:

“We want to have children and offer them as soldiers defending Islam. Teach them this: There is nothing more beloved to me than wanting to die as a mujahid (holy warrior). Put in their soft, tender hearts the zeal of jihad and a love of martyrdom.” [source The Age, 2007]

The makers of Undercover Mosque found children selling Islamic tapes [on DVD] in a car park behind a UK mosque. [source BBC, 2007] The DVDs were also sold in Australia by the Global Islamic Youth Centre.

This exposure occurred within a year after the Australian imam Taj el-Din al-Hilali had called woman “uncovered meat” [excerpts of this speech here] and a week after he told Egyptian television that white Australians were “liars” and that Muslims were more entitled to be in Australia than those with a convict heritage. [source The Age, 2007]