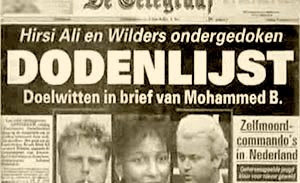 Our Flemish correspondent VH has compiled a report with the latest news on Geert Wilders’ upcoming trial on charges of “insulting minorities” and “incitement to hatred”.

First, a translation from Elsevier:

Wilders on trial the entire month of October

The PVV leader Geert Wilders was formally notified on Thursday that the criminal case against him will continue next month. The Amsterdam court continues the process starting on October 4. The verdict is due on November 2.

“It’s terrible that I have be in court trial the entire month of October,” Wilders said Thursday after he had received the summoning. “I will stand trial one whole month for freedom of speech.”

Three session days and the day of the verdict are on a day when Parliament assembles.

The PVV leader is accused of insulting Muslims and ethnic minorities and inciting to discrimination and hatred. Initially the Public Prosecutor (OM) in Amsterdam did not want to prosecute the politician, because he had made the statements in newspapers and on the Internet as part of the public debate.

The court in Amsterdam, however, thought differently, and saw possible offenses in Wilders’ expressions concerning Islam. The case for those grounds was brought to court by (among others) the [Socialist] anti-racism club Nederland Bekent Kleur [“Netherlands Admits Color”], which is headed by René Danen.

Wilders requested eighteen witnesses, experts, and experience-experts to be heard to support his defense. The court in Amsterdam appointed only three of them. “I cannot help but conclude that the court does not grant me a fair trial,” he said in early February about this refusal.

Tuesday October 12
Indictment by the prosecutors.

Friday October 15
Plea of the defense by Mr. Wilders

Tuesday November 2
Ruling in prosecution by the court (verdict).

[On Thursday November 4 it will be six years since Theo van Gogh was ritually murdered in Amsterdam by a Muslim, and Geert Wilders had to go into hiding, and has needed permanent protection ever since.]

“The club that filed charges” [video]

[February 09, 2008] “Netherlands Admits Color will organize a demonstration against racism on Saturday, March 22, 2008 on the Dam Square in Amsterdam. The foundation will also file charges against PVV Geert Wilders because of discrimination. Interview with René Danen of Netherlands Admits Color in the TV show “Pauw and Witteman” on February 8, 2008