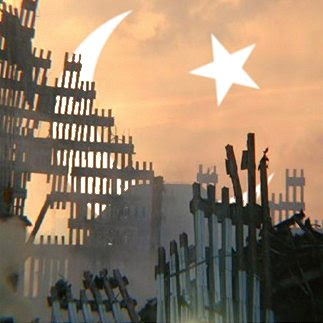 Debra Burlingame is a leader in the fight against the Ground Zero Mosque. Her group, 9/11 Families for America, has been in the forefront of the opposition to the Mosque. 9/11 Families for America is in this battle for the long haul. They will oppose any and all who would obliterate the real meaning of the hallowed ground of the World Trade Center. WTC is the mass burial site for the innocents who died there.

Ms. Burlingame’s brother was the pilot of the hijacked plane flown into the Pentagon.

The following is her statement, released this morning in New York City. It is, as she says, a “stunned” response to President Obama’s public support of the mosque.

Obama voiced his support at a Ramadan dinner held at the White House last night.

Here is Ms. Burlingame’s press release (my emphasis below — D):

Barack Obama has abandoned America at the place where America’s heart was broken nine years ago, and where her true values were on display for all to see. Since that dark day, Americans have been asked to bear the burden of defending those values, again and again and again. Now this president declares that the victims of 9/11 and their families must bear another burden. We must stand silent at the last place in America where 9/11 is still remembered with reverence or risk being called religious bigots.

Muslims have worshipped in New York without incident both before and after the attacks of 9/11. This controversy is not about religious freedom. 9/11 was more than a “deeply traumatic event,” it was an act of war. Building a 15-story mosque at Ground Zero is a deliberately provocative act that will precipitate more bloodshed in the name of Allah. Those who continue to target and kill American civilians and U.S. troops will see it as a symbol of their historic progress at the site of their most bloody victory. Demolishing a building that was damaged by wreckage from one of the hijacked planes in order to build a mosque and Islamic Center will further energize those who regard it as a ratification of their violent and divinely ordered mission: the spread of shariah law and its subjugation of all free people, including secular Muslims who come to this country fleeing that medieval ideology, which destroys lives and crushes the human spirit.

We are stunned by the president’s willingness to disregard what Americans should be proud of: our enduring generosity to others on 9/11-a day when human decency triumphed over human depravity. On that day, when 3,000 of our fellow human beings were killed in barbaric act of raw religious intolerance unlike this country had ever seen, Americans did not turn outward with hatred or violence, we turned to each other, armed with nothing more than American flags and countless acts of kindness. In a breathtakingly inappropriate setting, the president has chosen to declare our memories of 9/11 obsolete and the sanctity of Ground Zero finished. No one who has lived this history and felt the sting of our country’s loss that day can truly believe that putting our families through more wrenching heartache can be an act of peace.

We will honor the memory of our loved ones. We will protect our children, whose lives will never be the same. We will not stand silent.

If you remember, Mr. Obama said initially that he would not be making any statements about “a local affair”. Right. Uh huh. Sure. We believe you, sir. [/sarc] Since when could our president resist holding forth on any subject?

At a White House celebration of Ramadan tonight in the company of representatives of several of the Nation’s most prominent Muslim Brotherhood front organizations, President Obama announced his strong support for one of their most immediate objectives: the construction of a mega-mosque and “cultural center” at Ground Zero. In so doing, he publicly embraced the greatest tar-baby of his presidency. [the link in this quote is mine — D]

Obama has immersed himself in any number of tar-babies, but has emerged with only a few splotches clinging to his image. Call him “Resurrection Man”. Only a Democrat would be given a pass on the multitudinous stupidities of this regime.

[To our European readers: there is a long history on the Tar Baby legend. Until the P.C. Police took over, it was an emblem, a mythological story that resonated on any number of levels. In fact, it still does if you can scrape off the p.c. “death by silence” shroud they’ve laid over it. In that YouTube video above, you can see some of the original resonance.]

In the process, Mr. Obama also inadvertently served up what he likes to call a “teachable moment” concerning the nature of the enemy we are confronting, and the extent to which it is succeeding in the Brotherhood’s stated mission: “…Eliminating and destroying the Western civilization from within and ‘sabotaging’ its miserable house by their hands and the hands of the believers so that it is eliminated and God’s religion is made victorious over all other religions.”

Yep. Yet another “teachable moment” from Our First Teacher. Our condescending, I-know-more-than-you Fearless Leader whose favorite weapons are a piece of chalk and a pointing forefinger.

Read the rest of Mr. Gaffney’s analysis. He has all the nitty-gritty information on the sleazy couple who front for this “Initiative”.

This is going to be a long struggle, but the Muslim Brotherhood has gone a mosque too far on this one. There are so many survivors of 9/11 who remember only too well what the perps were.

The survivors of 9/11 aren’t going away.