In the past, Swedish postal workers — both public and private — have refused to deliver the party newspaper for Sverigedemokraterna (the Sweden Democrats), because they considered the contents “racist”. With elections coming up on September 19, and Sverigedemokraterna projected to get more than enough votes to enter parliament, the Swedish establishment is turning the screws on the party again. This time it is the TV4 broadcasting outlet, which has refused to run an SD campaign commercial, on the grounds that it is “hate speech”.

For those who are interested, a video of the banned commercial is available (in Swedish) at Högerkänga.

According to The Local:

TV4 has decided not to air ads from the Sweden Democrats (SD) before the election because it believes the clip promotes hate speech, CEO Jan Scherman said on Friday.

“The film is contrary to the democracy clause in the Radio and Television Act and also against democracy clauses which the Sweden Democrats among others have adopted for the equality of all people, regardless of whether it is the European Convention or the UN Charter,” said Scherman.

“The film is also against the constitution act on freedom of speech that prohibits hate speech,” he added.

According to SD press secretary Erik Almqvist, the ad does not violate Swedish law. The party has screened the clip for lawyers, who said that it does not break the law against inciting racial hatred.

The video shows a 20-second race consisting of an elderly Swedish woman with a walker being chased by a group of burqa-clad women with baby carriages while an alarm-like sound plays in the background.

“All politics are about priorities — now you have a choice,” says a voiceover.

“The conflict we see as a result of mass immigration is not related to the person’s origin, but rather a conflict of values, as far as we can see,” said Almqvist in reference to the burqa-clad women in the video.

It’s an open question whether Swedish elections nowadays can be considered “free and fair”, based on the public selection of a party sheet at many polling places (which lets election monitors know which party the voter is choosing) and the clampdown by the media.

However, not everybody agrees with TV4 and the rest of Sweden’s politically correct elites. Take, for example, this amusing photograph, which was also posted on Högerkänga:
– – – – – – – – – 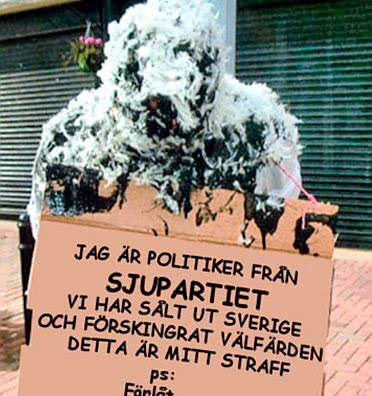 Many thanks to our Swedish correspondent LN for translating and footnoting the sign, to Fjordman for the article tip, and to Henrik Ræder Clausen for answers to numerous questions about Sweden.

9 thoughts on “Election Season in Sweden”