Takuan Seiyo returns with a meditation on the Husseinization of NASA, which was so poignantly revealed the other day by Administrator Charles Bolden. 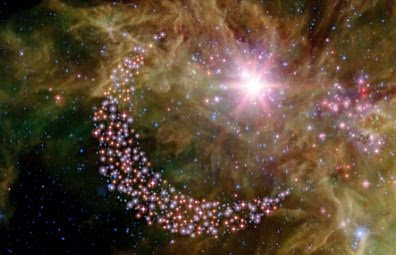 What do you do when you are a Cloward-Pivnick shogun of the United States? Let me count the ways…

The ways, the means and the facts are too many for such a forum as this, but if Aaron Klein knows what’s good for the country he’ll reissue an update of his book “The Manchurian President” every four months. One tiny slice of the vast tableau, NASA, will serve us well here.

As we iterated in April in “Vast Canyon of Gas and Dust, Inshallah”, under President Obama, NASA had turned from a space-exploration agency to a global warming fraud propaganda tool and a Muslim outreach program. It came therefore as no surprise that in a recent interview with Al-Jazeera TV, NASA chief Charles Bolden said that NASA’s “foremost” mission is to improve relations with Muslim world as well as to help them “feel good” about their “historic” contribution to science, math and engineering.

What I find more worrisome is the pattern embedded in NASA Administrator Bolden’s subsidiary marching order from Comandante Obama, also revealed in his Al-Jazeera interview: “He wanted me to help re-inspire children to want to get into science.”

A close text reader will have already deciphered that in his September 2009 speech Charles Bolden signaled that, for NASA too, “children,” like “social justice,” had become a cover word for Big Brother racial minority social engineering. Bolden said:
– – – – – – – – –
“By linking our agency with nonprofits, industry, community groups, and educators, we are finding new ways to inspire the next generation to study challenging STEM subjects and prepare to follow their own dreams of exploration. We will identify and develop the critical skills that are needed in aeronautics, Earth and space science, space operations, and exploration in order to ensure we can carry out our agency’s many missions.”

“Nonprofits” and “community groups” are of course euphemisms for ACORN, Color of Change, Rainbow PUSH Coalition and other such race-hustling commando squads raiding the public’s pocketbook with back artillery cover of Neue-Marxist outfits like Daily Kos, Move On and Center for American Progress. NASA can no more motivate “children” to take up science careers via nonprofits and community organizations than it can by placing recruitment ads in the MTV Video Music Awards young imbecile fest.

“We must also work to include the under represented and minority communities. Our Minority University Research and Education program seeks to engage these underrepresented populations through a series of initiatives that include multiyear grants, which are awarded to assist minority institutions, their faculty and students, in conducting research that we can employ in future NASA missions.”

No, we must not work to include the under-represented and the minority communities. We have done enough damage through the lowering of standards for the sake of racial bean counting in law schools, government appointments and public and corporate hiring. To introduce the same into American science research is to drive the lethal spike of malignant lunacy into the realm of empirical inquiry.

There is no “Minority University Research.” There is research. There is no “under-representation” in science except of those who lack the requisite talents and mental equipment to acquire the relevant training.

There is no “under-representation” in the NBA either. Science and basketball are the only two remaining areas of American life not kneecapped yet by the race maniacs. All that counts is how high you can jump. But that is apparently going to change, with NASA killing off the Constellation rocket program so that it can sprinkle funding onto global affirmative legerdemain, whether of the “Muslim science” kind or the “Minority Research” kind.

If the Obama government really wanted to motivate more qualified young people to go into science and space research, it could have killed two birds with one stone by better guarding the national interest versus the vampire squids of Wall Street. For more scientists may be found not through some community kolkhoz or disaffected racial minority cell, but by drawing to careers in science those already equipped brain- and education-wise. As it stands now, one so equipped can make $500k a year as a quant justifying with fancy formulas the leveraged insanity of the TBTF (“too-big-to-fail”) looters, or $50k as a scientist with NASA.

If Obama & Co were truly concerned about the long-term effect of racial disparities in the scientific professions, instead of phony voter-bribing and science-killing programs “to engage underrepresented populations” they would have induced the U.S. Congress to outlaw as a matter of national emergency the rap and gangsta culture mega-industry. If the Washington lootocracy were interested in growing more American engineers and scientists overall, it would have prohibited the “social promotion” of lazy free riders in the K-12 and college systems and banned MTV a long time ago as a threat to national survival. All that takes 20 years for results to show, but the results are at least real.

In the same Bolden speech, one learns that Dr. John Holdren provides co-guidance to NASA relative to President Obama’s “evolving vision for space exploration.” Holdren is Obama’s Science and Technology “czar” and a longtime proponent of “de-developing” the United States and the rest of the West, redistributing wealth both within and among nations, developing the Third World with that transferred wealth… and reckoning with sea levels worldwide rising by 13 feet.

The Muslim feel-good mission of Charles Bolden is a good butt for jokes and snickers, but it rests on a much larger vision of very unfunny consequences for the United States. People had better start thinking what B.H. Obama may have meant when he said, “We are five days away from fundamentally transforming the United States of America.”