Gates of Vienna contributor JLH normally confines himself to lengthy translations from Austrian, German, and Swiss publications. Moved, however, by recent events in Europe, he was inspired to compose the following pastiche of “The Walrus And The Carpenter” by Lewis Carroll, which was first published in 1872 in Through the Looking-Glass and What Alice Found There.

The Doorman and the Engineer
by JLH

(With apologies to Lewis Carroll) 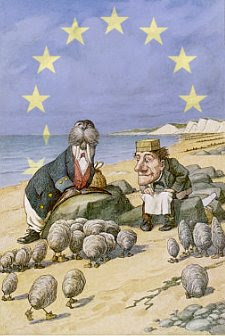 The countries were so very small,
Expectations were quite high.
The weary people worn by war,
Their coffers all were dry.
The Doorman and the Engineer
Gave up a mutual sigh.

The many borders made them sad,
Restricting trade and fun.
The Doorman cogitated long;
Ideas came but one:
“With seven committees in seven years,
Could something good be done?”

“I hope so,” said the Engineer,
With hopeful glistening tears.
“It’s up to us to show the way
To grow beyond our fears.
We’ll guide the process carefully;
We’ll also guide our peers.”

“Euroysters, come and walk with us!”
The Doorman did implore.
“A pleasant walk, a pleasant talk
Along the Euroshore.
We’ll only take but four of you
(And later 27 more).

Four smaller Oysters hurried up
To be among the few.
They spoke Italian, Dutch and French
And Luxembourgish too.
Never happier Oysters were
Than this sunshiny crew.

Some more Euroysters joined the group.
Their numbers grew apace.
Euroysters of all kinds began
To take up Eurospace,
And formed an ethnically diverse,
Multilingual bouillabaisse.
– – – – – – – – –
An elder eastern Euroyster —
“Klaus” was his name, it’s true —
Rebuked the giddy mollusk youth
Who rushed to join the crew.
“Beware the chefs that walk,” he said,
“You’ll end up in a stew.”

The Doorman and the Engineer
Walked on a mile or so,
Or possibly a kilometer —
It’s hard nowadays to know —
And gathered all their Euro friends
In a highly civilized row.

“The time has come,” the Doorman said,
“To talk of weighty things:
Of VAT and income tax
And Together Europe Sings;
Of Euro and Eurabia
And who is pulling whose strings;

“Of haute cuisine and driving machines
And 30-hour weeks;
Of plebiscites and parliaments
And unelected cliques;
Of what your GNP must be
Before you’re allowed to speak.

“Of why the sea is boiling hot,
And if Al Gore would know;
Of carbon footprints going wild
And melting all the snow
And using grain instead of oil
To make our autos go.

“Of cultural diversity,
And the joys of dhimmitude;
Remember, though, not to complain.
We don’t wish to be rude.
We only need some self restraint
And a pleasant attitude.

“Euroysters, now please shed your shells.
Protect yourselves no longer!
Without your shells, and free to move,
You only will be stronger!
And as for thinking for yourselves —
You needn’t any longer.”

The oysters never made a sound,
Huddled in a pot.
The spice of bureaucratic herbs
Overrode all thought.
Whatever else this new life was,
EUtopia it was not.

2 thoughts on “The Doorman and the Engineer”