In my post earlier tonight I reported that Muslims inhabitants of a sharia enclave in Nørrebro in Copenhagen are effectively acting as police in what they consider their own territory. Now it appears that the German authorities in North Rhine-Westphalia have made the policy official: they are sending uniformed Turkish police into their own sharia enclaves to try to maintain order.

The following article was posted today at Politically Incorrect. Many thanks to JLH for the translation: 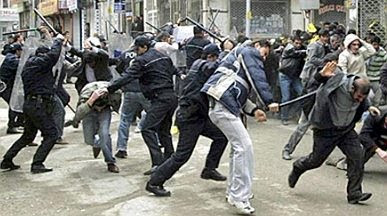 Because problems that have “immigrated” are not being taken care of any other way, Turkish police in their own uniforms will be deployed in “problem districts” of NRW. Why not just hand over our police to Turkey? In business, it’s called “outsourcing.” It’s great, saves money.

The German police union intends to send Turkish police into so-called “problem districts” in North Rhine-Westphalia. They are supposed to deal with ethnic Turkish youths.

“This cannot go on,” said the provincial head of the union, Erich Rettinghaus, in Duisburg. “Maybe that will be an effective technique. We should give it a try.” The Turks in their own uniforms are to go on patrol with their NRW colleagues.

“The new NRW interior minister is from Duisburg. He knows the problems,” said Rettinghaus. He said that it was no secret, there were conflicts with youths with a “migration background” in certain parts of the city. He did not want his suggestion to be taken in any way as a capitulation or an admission of failure by the German police.

The experiment would be scientifically accompanied, the union chief suggested. As an example, he mentioned the German-Netherlands police patrols. Understanding and integration must not shatter at the EU border.

Let us hope that the “de-escalation attempts” of the Turkish police (see photo) do not stop at the border.

11 thoughts on “Policing Their Own”