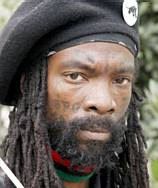 Unless you’re a political junkie, a student of far-left black liberation movements, or a resident of inner-city Philadelphia, the name Minister King Samir Shabazz probably doesn’t ring any bells. Minister Shabazz is the dude with the ’tude pictured at right, and functions as the leader of the Philadelphia chapter of the New Black Panther Party.

But he’s no fan of Barack Hussein Obama, either: “He’s a puppet on a string. I don’t support no black man running for white politics. I will not vote for who will be the next slavemaster.”

Does all this mean that Minister Shabazz is a racist? Not at all! As I wrote back in 2008, not long before Barack Hussein Obama was elected president:

No. He can’t possibly be one, because he’s a member of a historically oppressed group, and only members of the privileged elite oppressive majority can be racists. If his organization succeeds in its goal and destroys white people, leaving the surviving remnant a minority in the land, perhaps then his program would become “racist”.

But don’t bet on it. I expect that there would have to be a waiting period of several thousand years to make up for their past transgressions before white people could ever claim victim status in Minister Shabazz’ brave new world.

Samir Shabazz resurfaced a few weeks later when he and some of his comrades stationed themselves at a Philadelphia polling place to keep the crackers in line. To refresh your memory, here’s the infamous news video of what happened on election day in Philly:

This sort of racial intimidation would have been a hate crime if a white person had perpetrated it, but in Modern Multicultural America, such rules don’t apply to other races. And, true to form, the Justice Department under the new Obama administration dropped any complaint against the Polling Place Mau-Maus of Philly.

The issue lay dormant until recently, when a Justice Department attorney named J. Christian Adams quit in disgust over his agency’s blatantly political decision to abandon any civil rights case against the three intimidators. During the last few days he has been testifying before the US Civil Rights Commission, and as a result the New Black Panther Party is back in the news. According to Fox:
– – – – – – – – –

In emotional and personal testimony, an ex-Justice official who quit over the handling of a voter intimidation case against the New Black Panther Party accused his former employer of instructing attorneys in the civil rights division to ignore cases that involve black defendants and white victims.

J. Christian Adams, testifying Tuesday before the U.S. Commission on Civil Rights, said that “over and over and over again,” the department showed “hostility” toward those cases. He described the Black Panther case as one example of that — he defended the legitimacy of the suit and said his “blood boiled” when he heard a Justice official claim the case wasn’t solid.

“It is false,” Adams said of the claim.

“We abetted wrongdoing and abandoned law-abiding citizens,” he later testified.

The department abandoned the New Black Panther case last year. It stemmed from an incident on Election Day in 2008 in Philadelphia, where members of the party were videotaped in front of a polling place, dressed in military-style uniforms and allegedly hurling racial slurs while one brandished a night stick.

As usual, insults directed at white people never, ever count as “racial slurs” in the eyes of the law:

In a statement Tuesday, a Justice spokesman said the civil rights division determined “the facts and the law did not support pursuing claims” against the two other defendants and denied Adams’ allegations.

“The department makes enforcement decisions based on the merits, not the race, gender or ethnicity of any party involved. We are committed to comprehensive and vigorous enforcement of both the civil and criminal provisions of the federal laws that prohibit voter intimidation,” the spokesman said.

The Civil Rights Commission, which subpoenaed Adams, has been probing the incident since last year. Adams said he ignored department directives not to testify and eventually quit after he heard Assistant Attorney General Thomas Perez testify that there were concerns the Black Panther case was not supported by the facts.

Adams has described the case as open-and-shut and said Tuesday that it was a “very low moment” to hear Perez make that claim.

But he described the department’s hostility toward that and other cases involving black defendants as “pervasive.” Adams cited hostility in the department toward a 2007 voting rights case against a black official in Mississippi who was accused of trying to intimidate voters. Adams said that when the Black Panther case came up, he heard officials in the department say it was “no big deal” and “media-generated” and point to “Fox News” as the source.

Aha! It was reported on Fox News! That’s how we know it’s a figment of the wingnuts’ imagination. No intimidation took place in Philly. That nightstick was just an umbrella or something. Inclement weather that day in Philadelphia.

An editorial in Investor’s Business Daily has more to say:

In February, on the occasion of Black History Month, Attorney General Eric Holder called the United States a “nation of cowards” regarding discussions of race even as his department was failing to prosecute one of the clearest cases of voter intimidation in American history because the defendants were black militants, members of the New Black Panther Party.

Holder said that “we, average Americans, simply do not talk enough with each other about things racial.” Okay, let’s talk, starting with Tuesday’s testimony of J. Christian Adams, a former career DOJ attorney in the Voting Rights Section. Adams resigned over DOJ’s handling of the Black Panther case and DOJ’s refusal to honor Civil Rights Commission subpoenas, including ordering Adams not to comply.

On Election Day 2008, New Black Panther party members King Samir Shabazz, Malik Zulu Shabazz and Jerry Jackson engaged in activities that resulted in charges in a civil complaint of violating the Voting Rights Act through intimidation, threats and coercion, as they stood dressed in military garb outside a Philadelphia polling place.

Wait a minute — were there two Shabazzes involved in this incident? Yes indeed: besides Samir, Malik Zulu Shabazz was there at the polling station to put whitey in his place. Malik Zulu is actually more famous than Samir, but I couldn’t find any evidence that they are related to one another. Perhaps they simply decided to share the same potent surname de guerre.

Mr. Adams testified to the deliberate and direct interference of his bosses, which prevented anything resembling a fair inquiry:

The video of the event, photos and witness testimony presented an open-and-shut case ripe for DOJ prosecution. The Justice Department under President George W. Bush filed criminal charges against the three men. Holder’s Justice Department would later drop the charges in a plea deal in which the baton-brandishing thugs promised not to do it again in Philadelphia until 2012. They walked, free to intimidate elsewhere.

On Tuesday, Adams gave the testimony his bosses tried to block, telling the Civil Rights Commission how Holder’s department refused to prosecute what he has called “the clearest case of voter intimidation that I’ve seen since practicing law.”

At an April 23 Commission hearing, witnesses testified to how the Black Panthers acted in concert, threatening black Republicans and whites who showed up. Two witnesses testified that they saw some would-be voters turn back and leave without voting after seeing the nightstick and being called “white devils.”

Yet Thomas Perez, assistant attorney general for civil rights, testified before the commission in April that “the facts did not constitute a prosecutable violation of the federal criminal civil rights statutes.” Say what?

“After reviewing the evidence, the department concluded that there was insufficient evidence to establish that the party or Malik Zulu Shabazz violated Section 11(b),” Perez said in his testimony.

So the Shabazzes got off, and are free to continue to run their patch of Philly as their own personal fiefdom. It’s business as usual with the Obama administration. After all, politics in Philly isn’t all that different from politics in Chicago, and now, thanks to the One, the same style of Hope and Change prevails in Washington D.C.

Now imagine if this had been Tea Party members outside a polling place in Philadelphia, Miss. Would those in Holder’s department have turned their heads and said there was nothing to see here, just move along? We think the outcome and the media coverage would have been different.

It certainly would have been different. And it all makes sense, once you learn the simple rule: only white people can be racists.