Final update 2:54am BST: This post has been updated with what will probably be the final revisions (at least for tonight) of the report on today’s EDL demo in Dudley — see the original post.

At the time of this writing there is still no confirmation of a death. This may just be a rumor; we don’t know.

I’m told that the new information pasted below has been published at public venues, presumably mostly at the Facebook group.

First, from an EDL leader:

We believe hundreds of supporters were turned away so they never even got to Dudley. Some EDL were brought through Muslim areas by the police and then abandoned. Others were just left to wander and get picked off.

There was a delay in setting up the stage/loudspeakers, so the crowd got restless, but things then seemed to go to plan. After the demo the real problems began; there were more delays in allowing the EDL to disperse, with some being herded onto coaches and others told to walk back to a muster point that the police had brought them to by coach.

A lot of those brought in from a muster point that weren’t taken back by the police got lost, and we still have at least one member missing that I know of. His wife is very concerned.

A report from a witness at the demo: 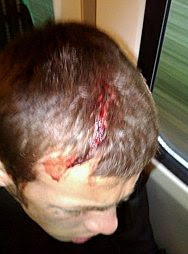 This person was struck in the face by an officer’s cosh repeatedly, and knocked unconscious.

Six people dragged him away from the crown; the old bill [police] didn’t care after my pleading. Then he was being dragged to first-aiders and the blood was uncontrollable, and it looked like he was in serious trouble, so I ran to the nearest officer, tapped him on the back and screamed, “Please help him, please!”

Him and his officer next to him threw me down the road.

Vlad has more, including a photo of a guy on the ground with a bloodied head. This seems to be the story of that casualty:

I treated this kid with my shell dressing. There was a lot of blood. Roberta and myself approached the police and requested to see the chief sup or another high-ranking officer. We were told to f*** off or words to that effect. They fobbed us off.

We requested to see the baton of the copper we believed did it. He hid it from sight, and was rather rude to us. They behaved with the uttermost disgrace, and showed us their true colours.

We were retreating. I had all the EDL members behind the barrier that we had surrounding the stage. The police then kicked it down and charged with dogs. I saw a young girl, maybe sixteen years old, savaged by a police dog.

And a more lengthy account of being abandoned in hostile culturally enriched territory:

I went to the Harrier pub with two lads l know and trust. We got split up and two of us got on a POLICE coach and were taken to demo site.

We were PROMISED by the police that we would be taken by coach back to the pick up point. The demo was a shambles with constant attacks on the barriers and the police.

NO POLICE ESCORT OR ANY PROTECTION AT ALL.

So we did — we walked all the way to the bus station to be met by 300+ Asians, all prepared for battle.

So we retreated all the way back up the high street, just three of us with no idea of where we were, not a clue. I called the guy who gave us a lift to the Harrier, he’d had fun too. He never made the demo, as he and 300 others had been given the runaround by the police. He’d only just made it back to the pub after a few violent encounters. He agreed to drive over and pick us up…

By this time we had been attacked by 35+ Muslim youths ( 11+ to 1, good odds, eh?). We retreated to the nearest police we could see, who just couldn’t care less!

They forced us down the road to another Muslim gang, while loads more came up another road at us. Things by this time looked very bleak, and we all knew we were in danger of our lives.

We went back to the police and were being treated very aggressively when our lift turned up. We got out of there by the skin of our teeth. Then we went back to the Harrier and heard the sad news that someone had been killed.

I’m surprised the body count is only one so far.

I’m at home now, realising how close the three of us came to being butchered, four including our saviour. That man deserves a lot of respect knowingly going into a very dangerous place to rescue us. Thanks from all of us, mate.

You put my arse out on a line, and I’ll never forgive you for that!

Stick with your Muslim friends.

Eight coaches were not allowed through to the demo site, including most of the leadership.

There are definitely people in intensive care after getting hit by the car. It sounds like some EDL people were deliberately mown down by a Muslim. But I cannot confirm that; I did not see it.

I suspect there might be trouble in Dudley tonight.

Update 9:23pm BST: Some excellent photos of the Dudley event are available here.

There are two images of bloodied demonstrators, but neither man seems to have any serious injuries:

There’s nothing yet to confirm the most alarming reports.

Update 9:02pm BST: Here’s another report (6.00pm BST) from the West Midlands Police. They acknowledge the accident and injuries, but say they are not life-threatening:

A man has come forward to police after six people were injured in a road traffic collision close to the scene of today’s EDL protest in Dudley.

The man came forward to West Midlands Police following the incident in King Street, Dudley at around 4pm today.

Police have appealed for witnesses to the incident but at this stage there is nothing to suggest the collision was deliberate.

A force spokesman said: “We are in the very early stages of the investigation but initial witness accounts suggest a family car was caught up in a small pocket of protesters.

“Whilst trying to work its way clear the car collided with some of the protesters as they left the protest area.”

The injured, none of whom have suffered life threatening injuries, were men and women ranging from 16-years-old to 45.

Total number of arrests is now 20.

Update 8:23pm BST: This is the first video I’ve seen. Hard to tell much from it, but here it is (hat tip Van Grungy): 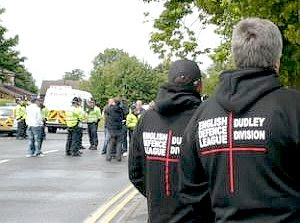 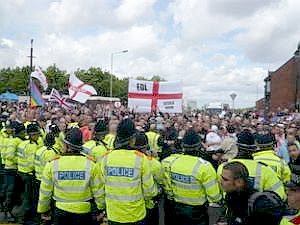 I’ve just spoken to [a source]. He, as I mentioned, is in a pub outside Dudley. A number of guys who came with him from [elsewhere] have decided not to return home now but to join up with others and return to Dudley to confront the police and the Muslims.

The news is that the Muslims have now taken over Dudley railway station, preventing people from leaving town.

There is anger that the West Midlands Police have obstructed all the negotiations to set up this demonstration, have caged the EDL attendees like animals, have stood by while they were attacked by Muslims, and joined in on the beatings. This is the police force who investigated the film crew from Channel 4 who made “Undercover Mosque”.

Just heard that an EDL coach driver has been attaked with a machete.

People lying in road after being run over, blood everywhere.

We have eyewitness accounts coming in of Muslims using cars to drive down English protesters in Dudley. One report of an incident where 4 people were driven into, left them seriously injured and one woman dead. We are waiting for confirmation of this incident and an air ambulance has landed to assist the injured.

Just got back. There needs to be an offical complaint made to police. Coaches to Dudley port weren’t allowed to run, and we were made to walk through the Muslim area. One girl attacked by police dog. Others stabbed and lying in blood. Police battened EDL and did nothing about the Muslims. It’s a disgrace. Can also confirm someone got run over. People need to open their eyes, and it seems like we are being singled out. It’s a disgrace!

Casualties from collision in King St taken to hospital after treatment at scene. Witnesses should contact West Midlands Police.

Police are investigating a road traffic collision in which at least four people were injured close to the scene of today’s Dudley protest.

The incident happened as EDL protesters began to disperse from the Stafford Street protest area.

Paramedics were called to the scene in King Street following the collision at around 4pm.

The force’s specialist Collison Investigation Team is carrying out a reconstruction of the incident.

Chief Supt Tom Coughlan said: “At this stage our priority is the safety of the injured people. A full investigation is already underway.

“The accident happened in an area of town away from the main protest area where there were no traffic controls in place.”

In a separate incident outside the Three Crowns pub on High Street two people needed treatment for head injuries and one for a leg wound following a disorder.

Earlier police were working hard to contain small groups of protesters who broke out of the EDL protest area.

Officers are investigating reports of criminal damage to windows and cars in the area.

Twelve people have been arrested for offences including possession of an offensive weapon and disorder.

Police are still working to disperse small pockets of protesters and groups opposed to the EDL at 5pm, but many have now dispersed on coaches and no one remains at the protest site.

Note: The report of an EDL demonstrator being killed is still just a rumor.

Still no word of video or photos.

Me dad says the police are using tasers.

Just spoke to sum lads from up north. They say a young child around 10 has been hurt by police

EDL facebook talks about police using tasers. This is untrue.

[Reply:] Yes they are, my pal just got done by a West Midlands Police scum!

[An EDL member] has just been told that a white man has been knocked down and killed and the police are doing nothing but kick the crap out of the EDL supporters.

34 thoughts on “Final Updates from Dudley”