Early Friday morning a large firework was detonated outside the synagogue in Malmö, Sweden’s most culturally enriched city. The synagogue has been attacked in the past, but not with explosives.

Our Swedish correspondent MS has translated two articles about the incident. The first is from Sydsvenskan:

MALMO. A blast caused by a large firework next to the synagogue on the night before Friday has the Jewish community worried. 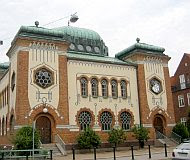 No one was injured by the powerful blast, but three window panes were shattered. Even worse, however, was the feeling the day after that once again they had been the victim of an attack:

“We thought we were finished with this sort of thing,” says Fred Kahn.

The police investigated the crime scene during the night, and in the near future will strengthen their surveillance in the area of the synagogue.

“We condemn this completely. Such an event is not just directed against the synagogue, but also at other targets that could be described as ethnic or religious.”

No threats of attacks on synagogue

No threat appears to have been issued prior to the explosion during the night before Friday, on the steps of the synagogue at Betaniaplan in Malmö.

A few minutes after two o’clock the police were alerted by several callers who heard a loud bang and saw a glow in the area. Police patrols found a charred black residue at the synagogue, but have determined that a major charge was not detonated.

The damage to the building is limited to a few small broken panes of glass.

Following the incident police have tightened their surveillance of the synagogue, and are consulting with the Jewish community. Malmö’s synagogue and its congregation have been subjected to threats and attacks several times in the past, but police said no incidents of this type have been reported in years prior to the night’s blast. The offense is classified as vandalism.

3 thoughts on “Explosion at the Malmö Synagogue”