As noted previously, Robert Spencer is visiting Sweden. Yesterday he was invited by Sverigedemokraterna (the Sweden Democrats) to speak at an event in Almedalen. Are you surprised that the Swedish MSM’s coverage of the event was slightly… ahem… biased?

Many thanks to Reinhard of FOMI for translating this brief news clip from Swedish state television, and to Vlad Tepes for the subtitling:

A transcript of the clip is at the bottom of this post.

Reinhard has compiled some background material on this event and includes his own commentary:

Note the phrase “what they [SD] call the Islamization of Sweden”. This phrase is used by the MSM when reporting on what SD says about the Islamization — a fact which, once one has traveled to Rosengård, one can hardly deny. The phrase “Islamization” does appear in the MSM, but only in articles dealing with Muslim countries like Turkey and other countries and regions where Islam is gaining in strength and the population is becoming Islamized.

However, if the MSM were to drop the qualifier, they would be seen as accepting SD’s narrative — that the same process of Islamization which is occurring in Muslim countries is also happening in Europe. This, of course, is something the media will not do.

Also note that the Muslim invited by Aftonbladet to dismiss Spencer as a racist is the leader of Sveriges Unga Muslimer (Muslim Youth of Sweden). The person handing out the “Islamofobil” is a representative of that organization. 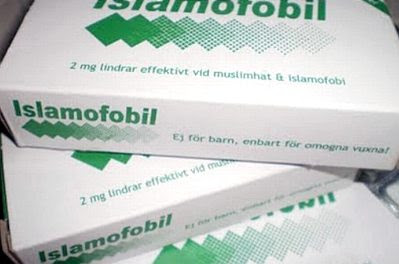 The Islamofobil package is part of a PR stunt perpetrated by Sveriges Antidiskrimineringsbyråer (Sweden’s Anti-Discrimination Bureaus), a network of anti-discrimination NGO’s. They are mainly sponsored by Ungdomsstyrelsen, a government agency which mainly deals with the financing of political youth organizations. The Islamofobil package itself was designed by a Muslim artist who has made several anti-Semitic statements on her own blog and other leftist, pro-Palestinian blogs. Svenska Dagbladet’s Per Gudmundson writes in his article on the Islamofobil campaign:

There [on the internet] she has written about how “Jews use the Books of Moses as scientific proof that they were given the task of conquering the world”, that “people remember the Holocaust only in order to legitimize the genocide of another people”, encouraged readers “not to write for Zionists or Zionist publishers”, and said that “Hitler was considerate compared to today’s extremism in Israel”. And she has had a well-known Holocaust-denier as guest-writer on her blog.

It is likewise interesting to note that Ungdomsstyrelsen helps finance the Sveriges Unga Muslimer. For 2010 they have received 1.5 million kronor (about €150,000). Earlier this year they invited Abdullah Hakim Quick, a notorious gay-basher and anti-Semite, as the main attraction at their national conference. After widespread outrage in the media — especially from the gay rights community — they withdrew their invitation.

Mehmet Kaplan, a Turkish-born member of parliament for the Green party and one of the activists on the Gaza flotilla, is a former leader of Sveriges Unga Muslimer. In 2008 he held a meeting in Swedish parliament on freedom of speech and religion, in which FIOE, Federation of Islamic Organizations in Europe, took part. FIOE is the Muslim Brotherhood’s European umbrella organization (pdf).

That the Swedish MSM invites leaders of Islamist organizations to denounce Spencer, without commenting on the activities and links of these leaders, is troubling, but hardly unexpected.

2 thoughts on “An Islamophobe in Sweden, Part 2”