Over the past couple of years I’ve become a big admirer of ACT! For America. Brigitte Gabriel has created a well-organized anti-Islamization action group that operates at the grassroots level all over the United States and Canada. ACT has both a charitable arm and a lobbying arm, so they don’t just talk and fundraise and hold conferences — they have been instrumental in pushing important anti-Islamization legislation in various states. For example, ACT played an important part in the passage of Tennessee’s recent law forbidding the application of foreign law — including sharia — in the state.

It was a privilege to be invited up to D.C. on Monday and Tuesday to attend ACT! For America’s National Conference and Legislative Briefing in Alexandria and at the Capitol Visitors’ Center. It was especially gratifying to hear the presentation by Elisabeth Sabaditsch-Wolf, who is already well-known to Gates of Vienna readers. Elisabeth was there to help connect the American Counterjihad — of which ACT is the premier grassroots organization — with its counterparts in Europe.

I didn’t arrive until Monday afternoon, so I missed two of the keynoters, Andrew McCarthy (author of The Grand Jihad: How Islam and the Left Sabotage America) and James Woolsey (former Director of the CIA). The afternoon session featured a how-to session from Guy Rodgers, the Executive Director of ACT! For America, followed by a presentation by Paul Sperry (author of Infiltration: How Muslim Spies and Subversives Have Penetrated Washington) on the extent to which the Muslim Brotherhood has penetrated our national institutions. 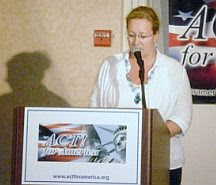 Elisabeth Sabaditsch-Wolff was the last speaker of the afternoon, and gave a brief account of the accelerating Islamization of Austria and the rest of the EU, and why it matters to the United States. She struck a chord with the audience, and a lot of listeners approached her afterwards to ask questions and offer their assistance. One of my major goals is to help Americans understand why the European Counterjihad is important to the United States, and Elisabeth’s efforts are a valuable part of that process.

As a matter of interest, she has now been appointed the ACT! For America chapter head for Vienna — opening up a further line of co-operation and communication between anti-jihad activists in Europe and the United States.

The gala banquet on Monday night was attened by a real mix of patriotic Americans — young and old, well-off and middle class, entrepreneurs and lawyers and working people and retired folks. What we all had in common was an absolute dedication to resisting the Islamization of America.

Some of the toughest people present were women — Rep. Sue Myrick was one of the after-dinner speakers. All of them are well-informed about the inroads that Islam has made in the United States, and all of them wre determined to stop it from proceeding any further.
– – – – – – – – –
ACT! For America is organized locally, with hundreds of chapters nationwide, and over a hundred thousand members. One of the purposes of the banquet was to recognize and honor the various chapter heads who had made the long trip to D.C. for the national gathering. Full-time staff members were also introduced to the audience during the evening. 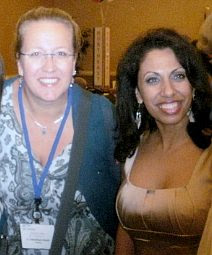 The functionality of non-profit organizations generally flows from the top down, so much of the credit for the success of ACT is due to Brigitte Gabriel herself. She is gracious and inspirational to rank-and-file members, giving them the credit they deserve and encouraging them in all their local initiatives. As a result she has assembled an effective national staff, both paid and volunteer, with a focus on legislative action that has generated real results.

Lisa Piraneo works full-time as a lobbyist for ACT! For America on Capitol Hill, so it fell to her to organize our trip to the Capitol on Tuesday morning. Despite the fact that there was a succession of floor votes throughout our session, Lisa managed to get seven congressional representatives to speak to our group and answer questions. The foolishness about Islam spouted by our elected representatives in Washington is often discouraging, so it was refreshing to realize that there are at least a few members of Congress who really get it. Regular readers of Gates of Vienna would have been pleased by what they heard in the auditorium that morning — every congressman who spoke used the same terminology and operated from the same knowledge base that we deal with here. Each of them is one of “us”.

First up was Sue Myrick of North Carolina, whose major focus was on border security. She spoke at length about the would-be terrorists who have been caught crossing our southern border. Their countries of origin include Pakistan, Iraq, Somalia, and Yemen, and many of them have been taught Spanish in an attempt to pass as Latin Americans.

Lamar Smith of Texas — who recently went viral with a YouTube video of his questioning of Attorney General Eric Holder — was next up, and sounded a similar note about the dire circumstances on our southern border. He outlined what he called the “Rule of Five”: during the last five years, more than five hundred potential terrorists from five Muslim countries have entered the United States illegally.

And these are just the ones who have been caught — how many others are here? Where are they living? What are they planning?

Rep. Todd Tiahrt of Kansas spoke about his work on behalf of several pieces of legislation, including the “No Welfare for Terrorists Act” (H.R. 2338) — which makes sure that the federal government doesn’t fund the “rehabilitation” of any Guantanamo inmates that it releases — and the “Keep Terrorists Out of America Act” (H.R. 2294) — which is designed to prevent Khalid Shaikh Mohammed and his ilk from ever being tried in civilian courts in the United States.

Marsha Blackburn of Tennessee spoke about the danger to the United States from Islamic terrorism, and the importance of our military in the fight against terrorism abroad.

Congressman Peter King of New York talked about numerous issues concerning the dangers posed by Islam in the United States. His major topic was the Ground Zero Mosque, and the difficulties that face its opponents in their attempts to stop it. He suggested that the most effective way to prevent the mosque from being built is to expose the two-faced imam behind it, and make public his sympathies and connection with terrorism.

I had never heard Minnesota Representative Michele Bachmann speak before, and was impressed with her energy, her spirit, and her thorough grasp of the facts about Islam. She spoke at length about the grave danger of Iran’s nuclear program, and pointed out that anyone who ignores what Mahmoud Ahmadinejad is planning has not learned the lesson taught by Adolf Hitler, who exposed his intentions in detail in Mein Kampf. She also described the foolhardy behavior of the Obama administration, which is actually contributing to the funding of Hamas.

Our final speaker was Rep. Trent Franks of Arizona, who talked about the effect that the current economic crisis is having on our ability to deal with the threat posed by radical Islam. Like Ms. Bachmann, he stressed the severe danger of nuclear weapons in the hands of the mad mullahs of Iran.

Brigitte Gabriel addressed the audience while some of the congressional representatives were on the floor voting. She pointed out that her organization is non-partisan, and does not endorse any party or individual candidates for office.

However, she noted that she had invited both Democrats and Republicans to address ACT! For America. Seven Republicans showed up, and there were several others who planned to attend, but were held up by floor votes in the house.

In contrast, not a single Democrat was willing to speak to us about the danger to the United States posed by radical Islam.

It tells you something about the current ideological bankruptcy of the Democratic Party.

5 thoughts on “Acting For America”