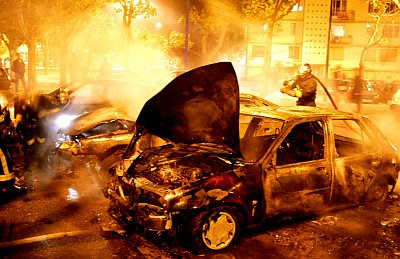 It was a typical hot summer weekend in Modern Multicultural Europe. Riots in Grenoble. Riots in Malmö. EDL demonstrators hunted by Muslim packs in Dudley.

Wait a few days, and there will probably be riots in Slotervaart. Or shootings in Brussels. Or car-burnings in Berlin.

Vandalism, larceny, and low-level violence are routine in the culturally enriched suburbs of major European cities. Most of the incidents merit only a brief mention in the back pages of the news, if they are covered at all. This has become the new norm: Muslim immigrants in their ghettoes regularly riot and throw rocks and burn cars. It’s just what they do, so it’s what everyone expects.

The French have an official bureaucratic designation for these malignant urban neighborhoods: zones urbaines sensibles (“sensitive urban zones”), abbreviated ZUS. In English they are commonly referred to as “no-go zones”, highlighting the fact that white people — or at least non-Muslim white people — are not welcome there. Within the no-go zones infidels cannot expect to be protected by the representatives of the state. Often the fire brigade and ambulance services refuse to enter such areas without a police escort, and the police themselves stay away unless they have a compelling reason to go in — plus plenty of backup.

However, a more appropriate term for these blighted zones would be sharia enclaves, because they are not merely immigrant enclaves, but microcosms of the Ummah, little pinched-off pieces of Dar al-Islam ruled by Islamic law.

The idea behind sharia is very simple: domination.

Sharia is all about Muslims achieving and maintaining a dominant position. This is the expression of the attitude and culture of sharia, the “mythology” underlying it (as opposed to simple practical jurisprudence, which is also part of sharia).

These enclaves in our cities all have something in common: sharia courts and sharia “police” who patrol the neighborhood, forcing Muslim women to wear the hijab and making sure that merchants sell no alcohol or pork. They even have armed Muslims acting as guards at the entrances to the enclave (Norrebrø in Copenhagen is an example).

Calling them “sharia enclaves” is accurate, because Muslims in them have taken over a territory in which they subsequently enact sharia. They have carved out a little piece of Dar al-Harb and turned it into Dar al-Islam.

The riots — the stone-throwing, the arson, etc. — have one thing in common: they are all directed against non-Muslims in general, and the infidel authorities in particular.

Israel experienced this with the successive intifadas by the Palestinians: an intifada is a throwing-off of non-Muslim authority over Muslims.

The street violence in the European sharia enclaves is the same thing: an intifada whereby Muslims shake off non-Muslim authority. The riots are a collective message of defiance to the infidel authorities: “You do not rule us. Kuffar law has no power here. In our enclaves we are governed solely by Allah.”

Understood in this way, Muslim enclaves and street crime are part and parcel of the Islamic drive to enforce sharia by coercive means.

This is useful to our understanding unfolding of events in Europe, and may help guide the strategy of the Counterjihad, since it explains why Muslims in the ghettoes behave the way they do. Sharia really is the heart of the problem. It is the thing that we — and the political authorities in our countries — need to focus on.

In this context it’s also worth recalling that the Islamic authorities draw much of their power from their ability to stop street crime. When Lord Ahmed issued his implicit threat to send “ten thousand Muslims” into the streets of London to protest against Geert Wilders, he was reminding the putative civil authorities that he and other Muslim leaders have the capacity to unleash a violent mob at a moment’s notice.

Every message from a Muslim leader about “community cohesion” and “the sensibilities of Muslims” is thus an implicit threat of more crime and violence. When leaders issue such messages, they are serving notice that if the demands of Muslims are not met, we can expect more dangerous and expensive mayhem when they release the intifada shackles and loose the dogs of jihad upon us.
– – – – – – – – –
The authorities already “solve” violent crime through the blood money system in the UK and Denmark. In this way the police have effectively ceded authority to the ulemas in the sharia enclaves.

What we are witnessing is the ongoing piecemeal dilution of secular law, with the establishment of theocratic sharia law in its stead.

The sharia enclaves in France are already officially mapped and monitored. One presumes that the civil authorities in Germany, Austria, Belgium, the Netherlands, Denmark, Sweden, Norway, and the UK have similar maps that are tacitly circulated among police officials and the emergency services. Such guidebooks are absolutely necessary if you don’t want to lose personnel by sending them unsuspecting into a ZUS.

Picture a huge map of Europe like the one of Paris at the top of this post. Each enclave is marked out and color-coded for the severity of its sharia — blue for mild, yellow for moderate, and red for Total Ummah. Now run the map forward through time in a rapid stop-frame animation, one frame per month.

If you were to begin in, say, 1970, and continue the animation up to today, the entire process would take about twenty seconds to view. In the beginning there would be just a few blue spots here and there — in London, Rotterdam, Marseilles, Paris, Berlin, etc. As immigration from Africa, the Middle East, and South Asia increased, you would see new spots appear, and the old ones would enlarge and turn yellow and then red. Neighboring dots would merge and become blotches taking up whole suburbs of major cities. Little orange tendrils would snake out along major traffic arteries to engulf satellite cities. Sweden, Norway, Denmark, and Switzerland would become infected.

Now fast-forward the animation for the next two or three decades. See the larger sharia enclaves encounter each other and merge to form entire bright-red sharia provinces within what used to be the heart of Christian Europe.

We may presume that the rule of Islamic law in such zones will be unabashed and complete. If the police and the secular courts can be kept completely out of the picture, hands and feet may be severed as demanded by the fiqh. Young women may be thrown out of windows or stoned to death when appropriate. The call of the muezzin will resound unhindered from the minarets that spring up like toadstools all over the landscape. Sheikhs and emirs will be able to exercise local governance without interference, issuing fatwas and executing sentences as demanded by the law of Allah.

This is the real future that awaits all of Western Europe — provided that the infidel continues to supply the money and expertise required to keep the cities functioning. As long as the kuffar are willing to send in the repairmen and the construction crews, truck in the halal food, and continue to issue the welfare payments, there’s no reason why all of this can’t become a reality.

Many of the ideas expressed in this post were derived from a lengthy discussion with Henrik Ræder Clausen and Reinhard of FOMI. Thanks, guys.

13 thoughts on “A Little Piece of Dar al-Islam”