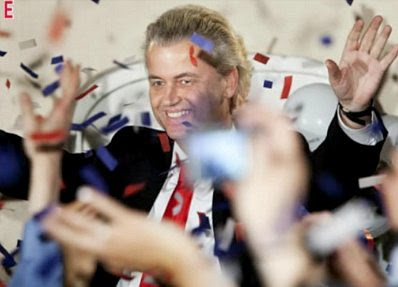 Needless to say, neither the Muslims nor the Left are pleased with Geert Wilders’ recent electoral victory, and they aren’t afraid to show it. Our Flemish correspondent VH has translated several brief pieces on the topic, and includes the accompanying images:

First, a Socialist response to the PVV victory from parool.nl:

The skate shop “Toms Outlet” in Amsterdam does not want to have any customers inside who voted for the party of Geert Wilders. On the shop window it reads: “PVV Voters Not Welcome”. A shop employee, Tim Pen, confirmed this in a response to a report by the local broadcaster, AT5.

Tim Pen said he finds the gains by Wilders’ party to be ‘‘disgusting’’. He wrote the text on the shop window because he ‘‘seriously disagrees with the ideas of the PVV’’ […] ‘‘I suspect 70 percent of the people who voted for him would otherwise not have voted, because they have no idea of what is going on in the world.’’

He will not, however, check the customers on their voting behavior when they enter the shop. ‘‘It’s more a symbolic kind of text.” […] “Those who do not agree with it will be invited to have a talk about it”. 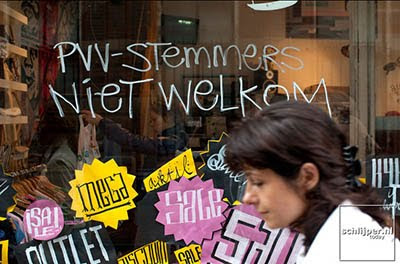 The Amsterdam photographer Thomas Schlijper took a picture of the shop window, which was also published at GeenStijl.nl: “Where have we actually seen this before?”

On May 20, before the elections, Izz Ad-Din Ruhulessin, a Muslim columnist for the [left-wing] newspaper De Volkskrant, wrote (translated excerpt):

It is up to the Dutch people: Do not recognize a government with Wilders, not in word nor deed. Say: “I do not recognize this government as legitimate representative of the people.” Strike. Demonstrate. Barricade. Occupy. Do not collaborate. A political crisis will result. But that’s just the price to be paid, if one really wants to take a stand for the Muslims. […] The Muslims will at least have clarity about their position in the Netherlands. Once and for all know we will who our friends are and who our enemies are. Those who accept the legitimacy of a government that includes the Party for Freedom are our enemies. The upcoming formation [of a coalition government] will be a historical one. […] Wilders and the Party for Freedom cannot and must not be tolerated under the guise of “he is just democratically elected” and other fallacies. Being democratically elected does not automatically mean they are legitimate or morally just. Even democratically elected governments can act outside the democratic ethic. Nip the PVV in the bud while you can, because prevention is better than a cure. Thinking that the horrors of history cannot repeat themselves in a “civilized country” such as the Netherlands is dangerous, naïve, and foolish.

On June 2 [excerpt], from De Volkskrant:

If we really want to accomplish anything in this discussion, than the traditional concepts should be resolutely rejected. Nearly nine million natives must be re-educated; and learn that they are not in the position to demand, or expect, of other ethnic groups, but to adapt to them.“

And on election day he used his voting right to invalidate his ballot paper by scribbling in Arabic on it: 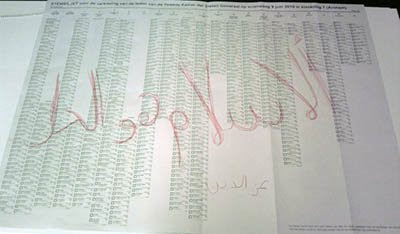 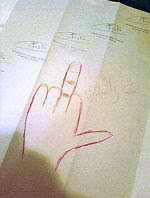 And also by drawing a middle finger on it:

15 thoughts on “Leftists and Muslims React to the PVV Victory”