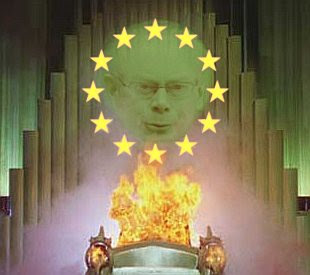 I may be reading too much into the following news story, but this seems a watershed moment. Up until now, the European Union has been the club that everybody wants to get into. It’s not just Turkey — Serbia, Bosnia, Kosovo, and other countries, even going beyond Europe proper into the Caucasus, are anxiously waiting in line to join Club Euro.

And now the people of Iceland have pulled the curtain aside and seen the silly little man fiddling with the knobs and dials. His increasingly reedy pronouncements — “I am the great and powerful Europe!” — seem to have lost their effectiveness.

Iceland Turns Away From EU

Meeting at the 17 June European Council summit in Brussels, the EU’s 27 member states have decided to open accession negotiations with Iceland. However, Le Figaro notes that “solid support for Reykjavik in Europe is not matched by a consensus on the EU in Iceland.” In late 2008 at the height of the crisis which brought their economy to its knees, EU membership was viewed as a lifeline by the citizens of Iceland. But now the Parisian daily reports that the situation has changed: “More than 60% of Icelanders, who are concerned about the ongoing Icesave bank dispute with London and the Hague, would vote against EU membership. Worse still,” continues Le Figaro, “a recent poll has found that 57% of the population are in favour of withdrawing the application to join the EU, and a multi-party group of MPs has recently brought a motion before parliament to scrap any further negotiations. For two thirds of the population, the 990 million krónur (€6.2 million/ £5 million) devoted to the accession budget would be better spent elsewhere…”

That’s a pretty hefty “no” vote — two-thirds of Icelanders would withdraw the application to join the EU. What happened? Did they realize that Greece and Spain are the Icesave of Europe?

5 thoughts on “Has the EU Lost Its Mojo?”