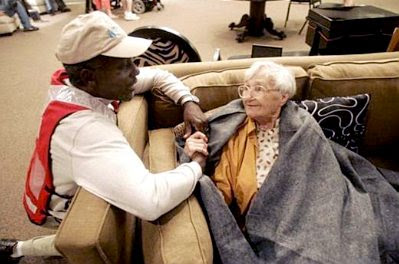 This photo is from the Tennessean. It is the first image in their gallery of pictures from the historically destructive flood in Nashville. The collection is worth visiting; three pages of thumbnail images load quickly.

When you dig a little more deeply into NPR’s current coverage, it amounts to one AP wire story dated May 1st. This robo report doesn’t even begin to explore the real devastation; they may as well be reporting on a flood in a remote village in India.

Before anyone says so, let me emphasize that I’m not belittling suffering that goes on somewhere else. My point is that even with NPR’s three radio outlets in the Nashville area, their national coverage was trivial. Nothing on today’s home page about the disaster, and equal nada on their news page. The blogs, big and small, are directing people where to go to donate money and goods, NPR has only a donation page for NPR.
– – – – – – – – –
If you want information from this government-subsidized entity, you have to do a search on their site for a link to stations in Tennessee which carry NPR premium-based programs. Here’s the home page for WPLN. They were flooded out of their offices but have returned. They have a contact page for anyone who needs help:

While everything is returning to normal at our headquarters, we are acutely aware that many of our listeners and our fellow staff members lost so much in our recent disaster. We pledge to help with the recovery, to bring our community together, report the information people need to restore their lives. We will pursue other ways to use our influence to help and welcome your suggestions and advice. What do you need to know, how can we help?

Meanwhile, given the losses in Nashville – billions in damage and destruction and at least thirty people killed – WPLN (and the other NPR affiliates) deserve more attention from the central office in the Washington, D.C. area. These local stations pay a premium to NPR for every program emanating from headquarters. You’d think ‘headquarters’ would have the smarts to collect stories from the local media folks and spread the word. Dream on. NPR is nothing if not arrogant. Disregarding the plight of Nashville, an historic American city, shows questionable thinking – and that’s being kind.

Newsweek has some good coverage on the MSM neglect.

First the story itself, reduced to the details:

As you may have heard, torrential downpours in the southeast flooded the Tennessee capital of Nashville over the weekend, lifting the Cumberland River 13 feet above flood stage, causing an estimated $1 billion in damage, and killing more than 30 people. It could wind up being one of the most expensive natural disasters in U.S. history.

Nashville itself considers what happened to be the worst destruction since the Civil War (and they’re picking up flak from the Left for daring to mention the war at all).

However, the point of the back story is this:

Or, on second thought, maybe you didn’t hear. With two other “disasters” dominating the headlines-the Times Square bombing attempt and the Gulf oil spill-the national media seems to largely to have ignored the plight of Music City since the flood waters began inundating its streets on Sunday. A cursory Google News search shows 8,390 hits for “Times Square bomb” and 13,800 for “BP oil spill.” “Nashville flood,” on the other hand, returns only 2,430 results-many of them local. As Betsy Phillips of the Nashville Scene writes, [her blog is called Pith in the Wind– D] “it was mind-boggling to flip by CNN, MSNBC, and FOX on Sunday afternoon and see not one station even occasionally bringing their viewers footage of the flood, news of our people dying.”

The author of this piece, Andrew Romano, suggests two possible reasons for what he calls the MSM’s ‘cold shoulder’.

The first problem from Mr. Romano’s perspective is that the current system for covering news is “a horrible feedback loop”. In other words, the major outlets are busy cribbing from one another and playing follow the leader rather than leading themselves in any given situation. It’s not what stories are important, it’s what stories other media outlets are following. And they call us sheep?

Besides this ‘ring around the rosie’ nose-to-tail circle of the media, Mr. Romano says they all have ADD. The story never gained the national media’s attention because the so-called “narrative” wasn’t strong. As he puts it:

The Nashville narrative wasn’t compelling enough to break the cycle, so the MSM just continued to blather on about BP and Shahzad.

He takes his confreres to task for the consequences of their being AWOL on this story:

However, I’ll posit a third reason, one which many conservatives will already have figured out: Nashville lost much in this disaster, but it didn’t complain, it didn’t demand that the government do something, and it refused to be saddled with a victim narrative. Instead, the city and state focused on disaster relief for those most immediately affected, and then clean up as the flood waters receded. People banded together to bury the dead. Now, as the waters have receded, they begin the long, slow, mucky project of restoration and repair of the things that could be saved.

Not only that, but as many Southerners have said before me, when it’s a southern town, there is less notice by the MSM because they’re mostly located in New York City and Los Angeles. Those places simply don’t pay attention to the south and it’s always been that way.

Noel Sheppard of Newbusters sent around an email last night about the reality of the situation. Until then, I hadn’t seen any details about Nashville:

A great American city is currently buried under a sea of water, but you may not know much about it given all the attention media have given to the oil spill in the Gulf of Mexico and the failed car bomb attempt in New York’s Times Square.

The rain totals are almost unimaginable as is the flooding.

Damage estimates at this point have already surpassed a billion dollars, and are likely to go higher.

Mr. Sheppard has a video at that link, and a listing of places where you can help. Besides the Tennessee Red Cross, his post has an unusual variety of aid, the kinds of private or ad hoc efforts that usually get lost in the larger professional aid programs. [Scroll down past the video].

Michelle Malkin serves an important function in the blogosphere. She is a megaphone for the important stories the MSM ignores. As such, she becomes a clearing house for aid in these kinds of disasters. At her post, “Nashville: How to Help” Ms. Malkin has assembled a varied list of more than a dozen initiatives to date. In addition she will update as new sources of aid and self-help come in.

An excellent local source for news and aid is Nashvillest. This site could serve as a model for other areas when they are hit with a natural disaster. They have a FAQ page for people who want to help and for those who need help. On the main page about the flood, they’ve marshaled their forces into smart categories of giving:

This is an outstanding source for both local and national aid to Nashville. Up front they point out what is necessary in order to get help from the federal bureaucracy:

But what is channelled through Hands On Nashville doesn’t even begin to cover the amazing breadth and depth of the things people are doing for themselves. And please notice which dogs didn’t bark to alert the MSM: no looting, no one crying victim, no sensationalism, no professional grievance ministers (like Al Sharpton in Arizona) to rev up the usual meme of what the government did wrong and how black people or Latinos were harmed.

If you’ve ever been involved in the clean-up following a flood, you know that it goes on for months afterward as the muck is cleared, the wrecked homes are leveled, and the hardest fight begins and continues: mold eradication. This will be a gargantuan, slimy process. Things will never return to the status quo ante; people will recover what they can and begin again. Families who lost their kin in the flood will find it most difficult to ‘move on’.

When the history of this disaster is written, it will be noted how Nashville took care of its own and did so with dispatch. That’s why it’s important for ignominous silence of the MSM to be duly noted by others.

They call Tennessee “The Volunteer State”. Now you know why.

5 thoughts on “Why Tennessee is "The Volunteer State"”