“Those who cannot accept the dominance of Islam will have to leave.” 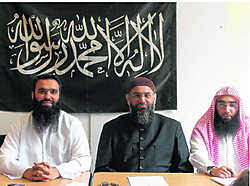 The “English teacher” Sayef ul Islam, the leader of Islam4UK Anjem Choudary, and the leader of Sharia4Belgium Abou Imran. In the background is the flag of the jihad for the Islamic Caliphate.

Our Flemish correspondent VH has translated an article from the Flemish newspaper Het Nieuwsblad about last weekend’s planned demonstration in Brussels against the burqa ban. The demo was cancelled at the last minute, but Anjem Choudary and his cronies say that they’re not done with Belgium just yet:

“Burqa ban will lead to violence”

“I warn Belgium. When the burqa ban is maintained, that will be a path that will lead straight to violence.” Anjem Choudary, leader of the in England banned Islam4UK, sounded very threatening in Antwerp. “We will only rest when the flag of Islam flies everywhere.”

The [Muslim] extremist Anjem Choudary was in Belgium on Saturday, May 22, at the invitation of the organization Sharia4Belgium, which came into the public eye when the members [violently — translator] disrupted a lecture of author Benno Barnard a few weeks ago. The reason for the visit of the British extremist was a planned demonstration against the burqa ban, which was scheduled for May 23 in Brussels. Choudary however, was not the only foreigner who had come to Belgium for this reason. Also a group of young radical Muslims from Denmark and England had made the trip.

However, the demonstration was banned by the Mayor of Brussels. Abu Imran, leader of Sharia4Belgium, therefore decided to cancel the action at the last minute. “Temporarily,” he said yesterday, during a hastily organized press conference. “We could not accept that kuffar [the article says: “unbelieving”] police officers might tarnish our sisters during the action. But we will not let it go like this. We are not slaves or house-negroes who let things being done to them. Our response will still follow. Because we are Muslims and thus we are victors, who are here to dominate. And those who cannot accept the dominance of Islam will have to leave. For my part, to hell.”

It was the start of a press conference full of threatening language and insults directed at all non-Muslims. And in “De Shelter”, a community center of the Borgerhout Community Development, which was created as “a meeting place where local residents from different backgrounds can get to know each other better.” Saturday, however, radical Muslims used precisely that community center for their very threatening language with which they rejected the entire Western society.

The message at the press conference was clear: the Western society must disappear and give way to the supremacy of Islam. “Your freedom and democracy belong in the garbage can,” Sayef ul Islam said, who calls himself “an English teacher”. […]

Not just Abu Imran spoke, but also Choudary and a further unknown Sayef ul Islam, who calls himself “an English teacher”. Sitting in the room were a dozen young Muslims from different countries, who occasionally let it be known that they fully supported the messages.

“I have a warning for Belgium,” Choudary said. “If you take away our sisters’ burqas, you walk a path that will lead to a physical confrontation. I like to be clear. Then afterwards nobody may say he was not warned. We are not like the Christians. If someone hits us, then we do not offer our other cheek.”

But to him it was not only about the burqa in Belgium, or about the ban on minarets in Switzerland. His ambitions reach much further. “We will continue until the flag of Islam flies over Europe.”

Choudary is thinking of settling in Belgium, as he also said. In England, where he comes from, he does not feel welcome any longer. His organization, Islam4UK, was banned early this year by the British government, because it violated terrorist laws. Organizations can also be banned if they glorify or encourage terrorism. “Great Britain is more intolerant than Belgium,” according to Choudary.

The most extreme statements came yesterday from the “teacher” Sayef ul Islam, who radically dismissed Western society. “Your freedom and democracy belong in hell. And the Catholic Church, what is that? The pope and his gang of pedophiles? The law of God is the law of the Muslims. And the terrorists, that’s you. But there will come an end to your secular extremism.” The message at the press conference was clear: Western society must disappear and give way to the supremacy of Islam. “Your freedom and democracy belong in the garbage can,” Sayef ul Islam said, who calls himself “an English teacher”. Islam, according to him, offers beauty and protection. Western values would only produce alcoholism, pornography, addiction and crime. “You live like animals. Like pigs and monkeys. But we will bring civilization, because our values are superior. Now the debate is still about whether our sisters are allowed to cover themselves. One day we will say that your women must cover themselves.”

Abu Imran, from the Flemish village of Boom, also let know that the opposition to the burqa ban will continue.

How many supporters Choudary, Abu Imran and Sayef ul Islam have is unclear. By the Muslim community they are often described as “exceptions who enjoy little support”. But those who were present yesterday found the statements of the three “very inspiring”.

An excerpt from a second article in Het Nieuwsblad:

“A meeting place for different population groups in the neighborhood”. With that purpose the community center “De Shelter” in the heart of Antwerp-Borgerhout was opened. A meeting place “where local residents from different backgrounds can get to know each other better.” Saturday, radical Muslims used precisely that community center for their very threatening language with which they rejected the entire Western society. All those in positions of responsibility were flabbergasted.

Despite asking a lot of questions afterwards, nobody could explain how an organization like Sharia4Belgium — against which Antwerp mayor Patrick Janssens [SP.a, Socialist] was some planning a legal battle weeks ago — could have been able to rent space in exactly that place.

“Anyone can express his views. But calls for hatred, those of course are not allowed,” the Antwerp alderman for Community Development, Loan Verbist [SP.a, Socialists] said yesterday in a comment. But that the community center “De Shelter” had been the scene of such statements, she knew nothing about. For that she referred us to Monika De Coninck, president of the OCMW. “A question of respecting a authority.”

De Coninck in turn forwarded the matter to the autonomous Community Development Antwerp. “Because we as a city we have nothing to do with ‘De Shelter’. All we do is occasionally rent space there.”

Griet van Baarle, president of the privatized association, yesterday afternoon was totally flabbergasted. “Sharia4Belgium in ‘De Shelter’? This is the first I’ve heard of that,” she responded. “The rental is in the hands of a special administrator, who regulates that. But there are clear rules. And it is clear that these kinds of organizations should never be able to rent space there.” Still, how had that been possible? “That I must find out the next in few days.”

The speakers this Saturday have expressed themselves in clearer language. Choudary, for example, said that to him it was not only about the burqa or the right to build minarets. Although he officially proclaimed a peaceful message — “an invitation to everyone to become a Muslim” [which in itself already is a threat — translator], as he called it himself — the threatening language cannot be misunderstood. “We will only be satisfied when the flag of Islam flies everywhere.” In reality, how many supporters of the speakers there were is not clear. They are often described as “eccentrics with a small number of followers”. But the mixed group of Danish, English and Belgian Muslims who attended the press conference on Saturday were remarkably enthusiastic.

7 thoughts on ““We Are Here to Dominate””