I reported earlier today that a spontaneous demonstration by EDL members has formed outside the police station in Wolverhampton. The crowd is protesting the detention of the “Rooftop Two”, who were arrested in Dudley yesterday at the mosque site.

This photo of the Wolverhampton protest was adapted from the EDL website: 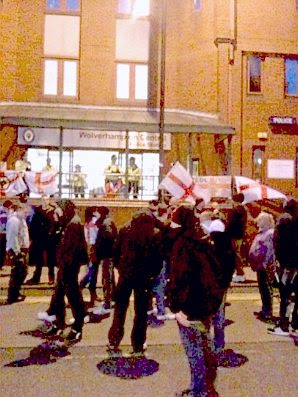 From the EDL forum:

“Someone has just posted on the main facebook page that Leon and Snowy [the ‘Rooftop Two’] are in court tomorrow.” The case will be heard at Wolverhampton magistrates court at 9am.

The EDL is doing an extraordinary job of grassroots organizing. They are very effective at enlarging their coalition to include more and more segments of English society. If I were in England, this is the group I would have to join — the EDL Seniors Division:
– – – – – – – – –

English Defence League group for those in our society that support our youth in their struggle to regain our Heritage and cultural identity. As our youth are marching in protest against the advancement of Sharia Law and those socialist political groups who support this invasion of our great nation, there are many of us who although not joining in the marches, we still give them 100% support for what they are trying to achieve. Socialist and religious corruption in our society has led to the formation of the English Defence League and their are many ways that we can support these brave young patriotic men and women, boys and girls that are struggling to restore what is rightfully theirs. Emails of protest, challenging the politicians when they condemn the values of the English youth and by ensuring that our voices are heard along side that of the young divisions of England that are taking the protest into the Cities and towns of England where Sharia law and socialist corruption rears its ugly head.

This group will be intent on creating a senior support network around the country for debating the issues that arise and supporting the marches and the protests against the injustices towards the English nation as they come to the fore. By sharing information with others and exposing the failure and corruption of politicians, together we can all make our voices heard and put our nation first for a change.

Patriotism is not racism and it has been our youth taking to the streets that has given us all the hope that we can still reclaim our Country back and instil law and order under a just legislative system that brings fairness for all.

The Old English Defence Fogies! What a great idea. Some of them are probably my old friends from Harrogate, ca. 1969.

6 thoughts on “Update From Wolverhampton”