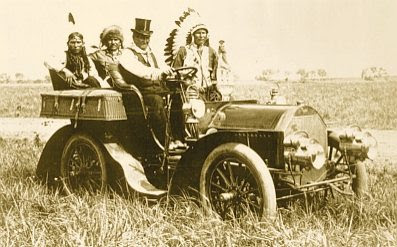 In the summer of 1972 I was a hippie college student between semesters, living with my parents in suburban Maryland while working as a plumber’s laborer. Riding in the car to and from work I listened to the local hippies’ favorite Baltimore radio station, WAYE.

As you might expect, WAYE played “alternative” music. In those days, before the shattering of popular music into a thousand micro-genres, that meant “progressive” rock. You could hear the usual suspects — Jethro Tull, Led Zeppelin, the Who, etc. — but also more obscure bands such as White Duck or McKendree Spring, groups that appeared for a time on the progressive radar and then dropped out of sight.

One of the musicians that I discovered on WAYE was Michael Murphy, and the song that brought him his first fame was “Geronimo’s Cadillac”. Its premise was derived from the legend that after the federal government took the Apache war leader prisoner, it gave him a Cadillac to drive around.

I went out and bought the whole album because of that song. For a young brainless hippie, it was a pretty cool: “Like, it’s about how the white man stole the land from the Indian, you know, and capitalist exploitation of… hey, don’t bogart that, gimme a hit… ahhhh… fwoosh! Now… what was it I was talking about?” etc.

Here are the lyrics as I recall them. The old vinyl is packed away somewhere, but this is fairly close:

They put Geronimo in jail down south
Where he couldn’t look a gift horse in the mouth
Sergeant, sergeant, don’t you feel
There’s something wrong with your automobile?
Warden, warden, listen to me
Be brave and set Geronimo free
Governor, governor, isn’t it strange
You never see a car on the Indian range?

People, people, don’t you know
The prisoners ain’t got no place to go
They took old Geronimo by storm
They ripped the feathers from his uniform

Now Jesus told me and I believe its true
The red man is in the sunset too
They took their land, and they won’t give it back
And they sent Geronimo a Cadillac

As it happens, it wasn’t a Cadillac that Geronimo was driving in the famous photograph, but a 1905 Locomobile Model C. But “Geronimo’s Locomobile” doesn’t have quite the same ring, does it?

Not only that, the car belonged to a neighboring rancher, and not to Geronimo — the rancher just let Geronimo drive it around.

However, the facts of the story aren’t what interest me, but the meme — the postmodern “narrative” of the Indian in America that was just getting started back in 1972 and has grown to its full bloated maturity in the thirty-eight years since.

To give him credit, Michael Murphy wasn’t much of an ideologue as pop stars go, not like John Lennon or Patti Smith or Joan Baez. He went on to a distinguished career as a reviver of cowboy music, and the Noble Indian was just an incidental part of his chosen genre, along with rawhide and sagebrush and roundups and all the other paraphernalia that accompanies the cowboy mystique.

With a full awareness of all the dreadful decades that followed “Geronimo’s Cadillac”, let’s take a closer look at the lyrics, and mine all the nuggets of the politically correct multicultural future that lay hidden within them.
– – – – – – – – –
They put Geronimo in jail down south
Where he couldn’t look a gift horse in the mouth

Under inexorable military pressure, Geronimo surrendered to the U.S. Army in 1886. After that he was kept under various forms of house arrest by the army, but he was allowed the opportunity to tour the country, attend county fairs, have his photo taken, and he even gave an interview. It’s not the way most people would want to live, but it’s hardly the worst thing that has ever happened to a war leader of a conquered people. Take Vercingtorix, for example. Or Goering.

But Geronimo had to be in “jail”. That was necessary for the meme.

Warden, warden, listen to me
Be brave and set Geronimo free

The word “bravery” used to mean something like “selfless courage in the face of imminent physical danger.” But in this case, a “brave” governor was one who would release a potentially dangerous Indian war leader back into his original environment.

So by 1972 the word had already changed its meaning, and it has mutated even more in the years since. Nowadays it is generally reserved for descriptions of middle-aged rock stars and actresses when they enter expensive rehab to treat their drug addictions.

The old-fashioned form of bravery has been all but extinguished from popular culture. The term has been replaced with more nurturing and inclusive language, words that are considered suitable for a non-aggressive multicultural utopia.

Governor, governor, isn’t it strange
You never see a car on the Indian range?

This couplet holds a compact summary of the anti-capitalist anti-technological ideology that was just taking hold in 1972. By the mid-eighties it was in full flower, and has reached its maturity in the 21st century with the Green movement, headed by the imposing Al Gore and his AGW Brigade.

Remember the TV commercial from the same period that showed an Indian in full regalia standing on a trash-strewn roadside and crying — an Indian warrior! Crying! — because of all the evil pollution that the white man had dumped on his once-pristine landscape? That’s what Geronimo partakes of here. He’s drawing on the mojo of the newfangled all-natural eco-minded Indian who practices sustainable farming and recycles his buffalo offal.

Never mind the fact that the “Indian” in the commercial was a seasoned Jewish actor out of Central Casting. Reality is not important. Only the meme is important.

This is an invocation of the Hippie Jesus. Organized religion, especially Christianity, is bad, but the Hippie Jesus is OK. He’s cool. He hangs with the Indians and the freaks and the dopers. He sticks it to the Man in the temple. He’s got a beard and sandals; I mean, how much cooler can you get than that?

At the same time there’s the Jesus that squares believe in, the one that they kill freedom-fighters in Vietnam in the name of. As Pearls Before Swine sang, “You crucify the enemy for Jesus.” That Jesus is not cool. He’s a tool of the military-industrial complex.

Yes, there’s an apparent contradiction here, but if you smoke enough bowls of Michoacan, it can easily be resolved.

They took their land, and they won’t give it back
And they sent Geronimo a Cadillac

Now we come to the meat of the meme: “They took their land, and they won’t give it back.”

That is, the evil white man stole the land from the Indian the same way a burglar steals jewelry. He sneaked in and pilfered the continent from its unsuspecting inhabitants while they weren’t looking.

But let’s not beat around the bush: The white man didn’t steal the land. He conquered it.

The white descendents of Europeans conquered North America the same way that Rome conquered Gaul, or Normandy conquered England, or the Arabs conquered Iberia. A stronger power in need of land overcame a weaker power and conquered its territory. Such has been the way of humankind throughout history.

The Indians themselves fought, killed, conquered, and occupied the territory of their neighbors for centuries before the arrival of Europeans. The white man’s superior technology, better weaponry, and greater numbers allowed him to prevail. The game didn’t change, just the identity of the winner.

A more apt comparison would be the Russian conquest of Siberia in the 18th century. A Christian nation with superior technology successfully overcame a less numerous and more primitive enemy who held a vast swath of sparsely-inhabited territory. The Russians did their share of killing and land-stealing back then, but how much grief do they have to take for it today? How many Russians do you see beating their breasts and bewailing their manifold racist genocidal sins?

Or how about the Chinese conquest of Tibet, which continues even now? Why doesn’t Hollywood fall all over itself lionizing the noble Tibetan in his struggle against the evil yellow imperialists? Why is there no Dances With Yetis?

The unfortunate fact is that only the white European is considered uniquely and irremediably evil. Everyone else gets a free pass.

Conquest didn’t get a bad name until after the beginning of the 20th century. In the 1890s Teddy Roosevelt re-branded it as “manifest destiny”, and it test-marketed just fine with his fellow Americans.

But sometime between August 1914 and August 1945 the rules of the game changed, at least for white people. Not only did conquest go out of fashion, but those who had successfully conquered — provided they were white — had to do penance for their past evils. And there is no statute of limitations on white racist crimes: the penance goes on forever.

It’s time to call a halt to this nonsense. Our history is our history, and we need to acknowledge it with pride.

Yes, our ancestors did things that we now consider evil. But at any given historical moment the deeds of Europeans were less evil than those of any other culture. In fact, European Christians developed very standards that allowed barbaric behavior to be labeled as such. The evils of the past can only be understood as evils because of a moral calculus invented by Europeans.

For those who consider the American Indian to be our moral superior: try reading the eyewitness accounts of what the Indians did to their enemy captives. It’s not a task for the faint of heart. Compare that to Geronimo and his Cadillac, and see who gets the prize for being the cruelest conqueror.

The Noble Indian routinely burned thousands of square miles of forest to promote second growth, which provided a better habitat for the deer he hunted. The tribes of Central America practiced slash-and-burn agriculture that devastated the fertility of the soil so completely that they had to migrate periodically, leaving behind a desolate wasteland that was unfarmable for decades.

How’s that for ecological stewardship?

The uncomfortable fact is that whenever European standards are applied uniformly to all cultures, Europeans always come out ahead. And the standards that are routinely used — in the Universal Declaration of Human Rights, for example — were devised by Europeans to codify what was best in European culture.

The catch is that, in order for them to be meaningful, we must apply these standards to real cultures and real peoples, and not these imaginary Indians and Arabs and Africans that the multicultural Left loves to set up as our noble exemplars.

Those perfect people do not exist, and they never have.

The tide has turned, and now the European is being conquered.

It is a slow-motion conquest that takes place in the heart of major cities throughout the European diaspora, from Oslo and Malmö and Rotterdam and London to Los Angeles and Ottawa and Sydney. Even so, white Europeans are surrendering territory more quickly than the Sioux or the Apache ever did.

In our case, however, the surrender is entirely voluntary and pre-emptive. It is as if the Indian said to the white man, “Here, come and live in our teepees. Our squaws will bring you food. Sit by our fires and spit on us and rape our daughters while we toil and slave. We have it coming.”

And we don’t even get a Cadillac as a consolation prize.

In the 21st-century West, the white man is in the sunset, too. And, unlike the West celebrated by Michael Murphy, this one may be past reviving.

12 thoughts on “The White Man is in the Sunset, Too”