Takuan Seiyo’s latest guest-essay concerns the Obama administration’s gutting of the space program, and what it means in the larger multicultural scheme of things.

Vast Canyon of Gas and Dust, Inshallah
by Takuan Seiyo

The magnificent Hubble Space Telescope is celebrating its 20th Anniversary. It’s a marvel of Western science and American technological achievement about which not much more can be said intelligently — except if you be an astrophysicist — than this: 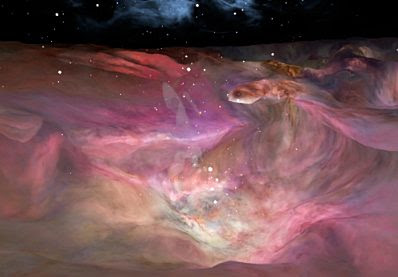 (Click to see a larger version)
The caption says, “This image depicts a vast canyon of dust and gas in the Orion Nebula from a 3-D computer model based on observations by NASA’s Hubble Space Telescope.” More Orion Nebula pictures are here.

In the presence of images like these, adjectives are silly. The most matter-of-fact prose, as in the Orion Nebula Wikipedia entry, has to invoke “bullets” of gas piercing “dense hydrogen clouds,” each bullet “ten times the diameter of Pluto’s orbit and tipped with iron atoms glowing bright blue.”

These are numbers that can sit honorably at the same table and have a drink or two with the United States’ national debt, currently estimated at $115 trillion. Tying the Orion Nebula and Obama Nation together is also the vast canyon of dust that the latter is being transformed into under much hopeychangey hot gas.

“Nasa is dying,” reports Jerry de Groot in The Telegraph. “Doom has come in the form of President Barack Obama, who yesterday unveiled plans for a stripped-down space agency during a speech at the Kennedy Space Centre. The speech was more like a funeral oration than a new policy announcement.”
– – – – – – – – –
The nebulous hot gas bullets were piercing the clouds of credulity already in August of 2008, when Presidential candidate Barack Obama during a campaign rally with NASA workers criticized the Bush Administration for inadequate support of NASA and promised to change that (more here).

America voted for the change, and change it got. The change is neatly expressed by the headline, Obama cuts US space program, orders NASA to work with Muslim countries.

Not that NASA didn’t need change. For instance, a recent GAO Report shows that in 2007-2008, NASA reported 1,120 security incidents that resulted in the installation of malicious software on its systems and unauthorized access to “sensitive information.” We do not know to what extent the BHO administration has tackled and contained this idiocy. On the other hand we do know that NASA now has a black chief and a female deputy chief, so at least we started out with what really matters: racial and gender justice[1].

Another change that raises hope — alas only among people surfing the Daily Kos between sips of Fair Trade coffee under a poster of Comandante Che — is NASA’s increasing involvement in hockey sticks, data fudging, and other science fraud at its Goddard Institute for Space Studies for the sake of — what else — social justice. The falsified theory of AGW (Anthropogenic Global Warming) is after all a necessary underpinning to the enterprise of shutting down or at least crippling Western industry and generating a humongous flow of whitey penance cash streaming from the West to the Third World, i.e. the “trading” after the “capping.” It’s probably to bolster this case that president Obama has reshuffled $2.4 billion in the NASA budget to “battle against climate change.” Less space exploration, more Fair Trade.

A further change NASA got was the gutting of its Constellation rocket program in addition to the ending of its Space Shuttle. The funds are simply not there when you have to provide medical insurance to several million citizens of Mexico, to continue the wealth transfer mirage of Fannie ‘n’ Freddy and to offer free college education for every possible moron with high self-esteem and low competence at the multiplication table.

What budget remains will be deployed in part in the service of American science and technology as per the announcement, “NASA Administrator Charlie Bolden said Tuesday that President Barack Obama has asked him to ‘find ways to reach out to dominantly Muslim countries’ as the White House pushes the space agency to become a tool of international diplomacy. He mentioned new opportunities with Indonesia.” Jihad Watch called it simply “dhimmitude in space.”

Dhimmitude is our national pastime now, manifest daily in every public institution and in the public utterances of key public officials. If only top Russian commanders were writing Chechen war strategy manuals without once mentioning the word Islam, and if the Chinese shifted their focus to sharing space technology with Nigeria and Sudan, everything might be okay.

Alas, it’s not the case.

13 thoughts on “Vast Canyon of Gas and Dust, Inshallah”