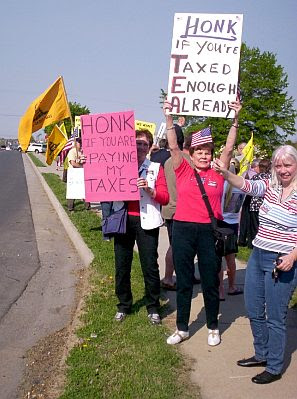 Posting has been light today because Dymphna and I spent much of the day traveling to and from Charlottesville to attend the Tax Day Tea Party sponsored by Jefferson Area Tea Party and the Jefferson Area Libertarians.

Dymphna will be blogging more about the event later on, so I’ll just give the brief wrap-up. This year’s event was held in front of the main post office on Seminole Trail in Charlottesville. The attendance was considerably lower than last year, but our visibility was much greater.

As you can see from the photo, Tea Partiers (Dymphna included, although not in that particular photo) stood by the roadside with signs and waved to passing vehicles. Many people responded by honking, especially the tractor trailer drivers. A few people also shouted obscenities or made rude gestures, but only a few.
– – – – – – – – –
The weather was great. TV camera crews were on hand to spin the event for Channels 16 and 29. We listened to speakers and sang patriotic songs, and a good time was had by all. There was no sign of any defamatory infiltration, as far as I could tell. As usual, the Tea Party crowd was as civilized and reasonable a bunch of ordinary Americans as you could find. The FBI guy was unobtrusive and left early.

Events at the post office adjourned at 6:00pm and reconvened at the nearby Golden Corral restaurant, but we had to miss that part. 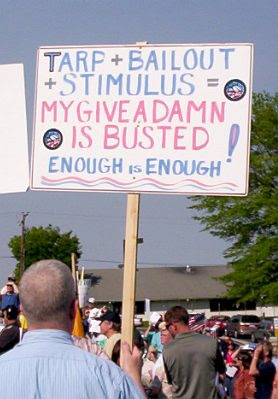