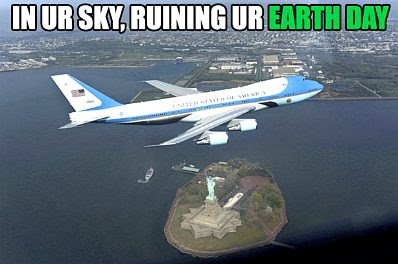 On a day when many Americans will be reflecting upon how they can reduce their impact on the environment, President Barack Obama and Vice President Joe Biden will board separate jets in Washington on Earth Day morning to fly 250 miles up the east coast to New York, where they will land at separate airports to attend separate events within a few miles of each other.

The parallel visits of Air Force One (a 747/VC-25 aircraft) and Air Force Two (a 757/C-32A aircraft) will delay dozens, if not hundreds of commercial flights at Kennedy and LaGuardia and other nearby airports as no-fly zones are implemented. Jets will be forced to circle and burn more fuel as they wait for the VIPs to come and go. Their security contingents consisting of dozens of cars, SUVs and helicopters will burn even more. Throw in thousands of commuters’ cars and delivery trucks sitting idle in traffic as law enforcement closes large swaths of the city and you have yourself a very Earth-unfriendly day.

This is a non-partisan post which I would be writing no matter who were in office. I’ve been known to complain when ANY president makes frivolous trips to New York, simply because it disrupts so many people and it is extraordinarily expensive. For both men to visit on the same day, especially a day of supposed environmental friendliness, is extraordinarily thoughtless, to put it mildly.

And what, you ask, will the Dauphin be doing in New York City? A worthy question, which NYC Aviation answers, bitterly:

Obama will be making a speech about new banking and finance regulations, a worthy subject, to be sure. Federal Hall on Wall Street, the site of George Washington’s first inauguration which stares directly at the doors of the New York Stock Exchange, would be the ideal location for this speech, but Obama will deliver it from…an art and engineering school? Any symbolism of delivering the speech in NYC is lost. He may as well save everyone the effort and talk to the nation from the Oval Office.

I’m not sure, but Obama may be the most clueless president since Ulysses Grant:

Long after the fumes of his Earth Day fuel wastage have faded, his obduracy regarding Goldman Sachs (from whose PAC Obama received almost a million dollars that he has no intention of returning) will still be waiting for answers:

Lawrence Jacobs, a University of Minnesota political scientist, said that “almost everything that the White House has done has been haunted by the personnel and the money of Goldman . . . as well as the suspicion that the White House, particularly early on, was pulling its punches out of deference to Goldman and its war chest.

Heck, the White House — i.e., the Dauphin — will continue to do as he damn well pleases because there is no one to reign him in. Our national media are limp and impotent.

9 thoughts on “Spoutin’ Carbon All Over Yur Earth Day”