Our Flemish correspondent VH has compiled a report on the latest scandal in Antwerp: Benno Barnard was prevented by Muslims from giving a lecture. 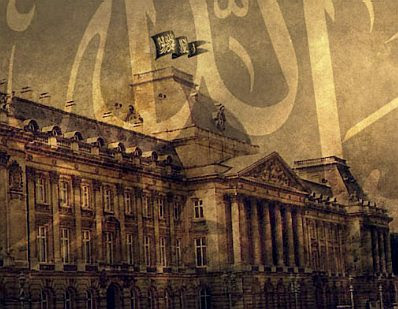 The image above is a detail from a picture on the sharia4belgium website, and shows the jihad flag of the caliphate (with the shahada) flying over the Royal Palace in Brussels.

Here is VH’s translation from De Morgen, interspersed with other material and videos:

Muslims disrupt lecture Benno Barnard at the University of Antwerp

A lecture by the Flemish/Dutch writer Benno Barnard [poet, essayist, playwright, and translator; born in Amsterdam, moved to Flanders in 1976] for the vrijzinnige dienst [liberal service] of the Antwerp University, was disrupted Wednesday night [March 31] by Muslims.

“I was supposed to give a lecture for about fifty students. The lecture on political Islam had the ironic title ‘Long live God, away with Allah,’ and that was for some extremist Muslims enough to disturb it even before I had spoken three sentences,” the writer says. “To my great surprise, at the start of the lecture a lot of Muslims were in the audience. It soon turned out they had not just come down to the auditorium to listen. Via SMS and the website sharia4belgium [a recently-founded franchise of Islam4UK (video), the organization founded by Anjem Choudary (Pat Condell video)] the call went out to disturb the lecture.”

The Islam debate of Benno Barnard

The enemy of our religion again has gone a step closer towards their overt insult to Islam and its followers. On Wednesday, March 31, 2010 the vrijzinnige dienst of the University of Antwerp, is organizing a lecture with as title: “The Islam debate: long live God, away with Allah!”

The guest speaker is the Dutch poet Benno Barnard, who is also known as one of the most radical Islam-bashers in the Low Countries, or to say it using their beautiful words: one of the leading Islam critics!

Central to the lecture is “political” Islam, which according to him is the cause of the standoff with Western ideologies, headed by humanism (or vrijzinnigheid [liberalism]) The title however, betrays his intentions, and is yet another slap in the face of the Muslim community!

And this way it is announced on the website Liberales [liberal think tank with close contacts within the University of Antwerp] — translator]:

Benno Barnard on “The Islam debate. Long live God, away with Allah!”

“Of course every Muslim, like any other human being, is a barrel full of influences, of which the Belgians are not the least important. But that same barrel can be filled with explosives through the funnel of tradition… Our confrontation must concern an ideology! Namely that of political Islam, which unfortunately is so difficult to separate from Islam at all.” This is the sixth lecture in the series “Our Values. What future for humanism?” Location: City campus of the University of Antwerp, Rodestraat 14, admission is free.

Do we as Muslims just let this happen or do we answer this pure provocation with a sharp tongue…?

Here is a preview of how our Muslim brothers in the United States deal with such “guests” [on the website they have the video shown below of the attempted speech of Michael B. Oren, Israeli ambassador to the United States, which was made impossible by Muslims at University of California Irvine on February 8, 2010 — translator]:

Don’t forget that this dien is an amaanah, which Allah ta3ala has placed on our neck! Anyone who reads this call and throws in the towel will be questioned on Yaum Al Qiyaama. “What did YOU do in the defense of your faith?!?”

The Rector of the UA Alain Verschoren, emphasizes that the University of Antwerp values active pluralism highly and wants to provide space for all opinions to enter into a dialogue with each other. “I regret that there was no opportunity for dialogue, because the lecture was already disturbed after a only few minutes.”

When Barnard took the floor, there was hell to pay. Someone shouted, “You must not make jokes about Islam.” Then a group of about eighty foreigners started chanting “Allahu Akhbar”. The youngsters stormed the stage and the debate was canceled, ended before it even began. Those worried about the rise of Islamic headscarves should definitely look at the video (see below) of the action. After the headscarves, now also men in long robes with long beards and turbans are on the rise. And all this under the banner of “religious freedom”, “multicultural enrichment” and “tolerance,” “peaceful” Islam.

This is a video of what happened at the University of Antwerp:

Police spokesman Fons Bastiaenssens confirms that a little after eight in the evening they received a message about the disruption at the university. Upon arrival, the police escorted some twenty Muslims out of the building. In the end the incident included some shouting, but there was no violence. There were no arrests.

Antwerp Mayor Patrick Janssens [SP.a., Flemish Socialist Party] is outraged. At the local TV channel (ATV), he compared the incident to “a meeting of OPEC that ended in a quarrel”.

Benno Barnard responded in shock: “Without the police and my own bodyguards I would have been in the hospital now. Free speech is stifled by terror. This is not the future, but the present in our cities…” After our distinct campaign with the Islam-green poster anyone who would still ask, “Why Flemish Interest?” thus gets the reply: Because of this!

15 thoughts on “Silenced in Antwerp”