Here’s the latest news from the ever-vigilant Department of Homeland Security:

BROOKLYN, NY, APRIL 1 (CNN) — At least eight people have been arrested in raids by a FBI-led Joint Terrorism Task Force in Crown Heights as part of an investigation into a Brooklyn-based Jewish militia group known as Jootaree. Federal agents made simultaneous arrests in Brooklyn and also at the terrorist group’s “Bar Schlemiel” training camp in the Poconos.

“People think of domestic terrorism as coming mainly from Christian extremists,” said FBI spokesmen Hadley Torquemason, “but that’s not true. The Bureau has noticed a dramatic upsurge in Jewish terrorism, especially among reformed congregations in Brooklyn, Passaic, and Miami Beach.” 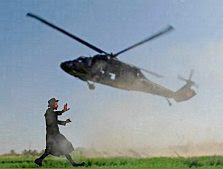 The smell of helicopter exhaust mixed with the scent of freshly-baked matzo in the Bar Schlemiel compound as the FBI choppers landed in the middle of the camp to make their arrests. The raid came so suddenly that the terrorists were caught by surprise, and surrendered without resistance.

The suspects are expected to make an initial appearance in U.S. District Court in Manhattan on Monday.

On Thursday, the FBI confirmed that federal law enforcement agents were conducting activities in several Brooklyn neighborhoods and the Poconos in connection to Jootaree, a Jewish militia group. FBI Special Agent Tammy McTavish told the CNN that the federal warrants in the case are under court seal and declined further comment.

WABC-TV reports that helicopters were spotted in the sky for much of Wednesday night, and agents set up checkpoints throughout the area. Witnesses told the station that it was like a small army had descended on the area. The Department of Homeland Security and the Joint Terrorism Task Force are also involved in the raids.

Other area Jewish militia groups were quick to disassociate themselves with the Jootaree. Avram Rabinowicz, a spokesman for the Righteous Yid Army of Hackensack, denounced the Jootaree. “Last night and into today the FBI conducted a raid against homes belonging to the Jootaree. They are a religious cult. They are not part of our militia community,” he said. “They are more of survivalist group and in an emergency they collect kosher supplies and then withdraw to the Poconos to stand their ground.”

Moishe Cohen, a spokesman for an Orthodox congregation in Crown Heights, was not happy about the arrests. “These Reformed extremist groups get all the media attention. What are we, chopped liver?”

The FBI declined to comment on how extensive the Jootaree group is. “All I’m willing to say is that home-grown Jewish terrorism is a greater danger than most people think,” Torquemason said. “We’ve already locked up most of the Christian groups, so what other religious extremists are left?

“OK, maybe there are a few Buddhist nut cases here and there, with their yellow robes and AK-47s and all. But they aren’t the real danger.”