Today’s news about Poland’s great loss has obliterated any other story out there. This event is so thickly tragic that it demands a response beyond mere sympathy for the Polish people. This is one case where we do rail against an event as immensely unfair, deeply, horribly unfair.

There are several estimates of the numbers of people killed in the plane crash:

There were conflicting reports today of the number of people on board the flight. Russian news agencies reported at least 88 people died in the crash near Smolensk airport in western Russia, citing the Russian Emergencies Ministry. They reported 132 people were aboard the Tupolev Tu-154.

But Polish officials said 88 people were on board when the plane crashed. Sky News reported 96 dead.

This echo of the USSR’s slaughter of Polish Army officers by the Russians in 1940 is twisted barbed wire stuck into the heart of the Polish people. It is beyond irony that the president, Lech Kaczynski, along with many political and business leaders in Poland were killed on their way to attend a memorial service in Russia for that Katyn massacre: 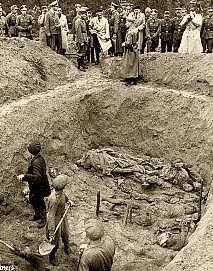 The president and his wife were on their way to a memorial service for the victims of the Katyn massacre which, in 1940, saw thousands of Polish prisoners of war murdered (primarily military officers), intellectuals, policemen, and other public servants by the Soviet NKVD.

Polish-Russian relations had been improving of late after being poisoned for decades over the Katyn massacre.

Russia never has formally apologized for the murders of some 22,000 Polish officers, but Prime Minister Vladimir Putin’s decision to attend a memorial ceremony earlier this week in the forest near Katyn was seen as a gesture of goodwill toward reconciliation.

Ironically, the blame could be reasonably laid at the door of fiscal constraints since the plane was not new:
– – – – – – – – –

The presidential Tu-154 was at least 20 years old. Polish officials have long discussed replacing the planes that carry the country’s leaders but said they lacked the funds.

According to the Aviation Safety Network, there have been 66 crashes involving Tu-154s, including six in the past five years. The Russian carrier Aeroflot recently withdrew its Tu-154 fleet from service.

No doubt this event will certainly lead to better planes for the remaining leadership, but how sad that old aircraft and pilot error were to blame for this monstrous loss.

The Daily Mail has an initial short list of some of the victims:

For home schoolers and those interested in Polish history, Muckety has a relationship map which covers the event: people, relationships, and historical antecedents, including Katyn.

One of the first things I did was look for the Polish national anthem. Despite the static nature of this video, it will no doubt draw world wide viewing today, given that it has English subtitles:


What happens when a country’s leaders die this way? A great vacuum occurs in the living institutional memory of that nation. Poland has suffered greater losses than this and come back again and again. But this one is a peacetime loss, not an act of war.

America’s citizens of Polish descent are widely scattered throughout our country. Detroit used to be a famous enclave; Chicago still is. Anywhere there was hard work to be done under difficult circumstances, Poles were there.

I am noticing that the outpouring in America cuts across our usual polarized political boundaries. Events like this transcend those limits and we all become simply human beings grieving for this massive loss.

One can presume our president, who has whimsically blown off so many meetings and leaders during his short time in office, will actually go to Poland for the memorial service. It would be a wonderful gesture if he offered some up-to-date planes for the use of future Polish leadership. I realize that few can afford to fly around in American presidential luxury, but perhaps he could give something safer than the Tu-154s the Poles are currently using. Or perhaps the Russians will beat him to it?

It is times like this, looking at Air Force One (and AF Two, for lesser beings like the Vice-President and First Lady), one realizes how well they epitomize conspicuous consumption to the rest of the world. Will there ever come a time when such ‘perks’ are seen in their true light?

To all our readers in Poland, may your hearts be soothed by those who have gone before you, may your country find in this awful experience new unity and perseverance for the hard times ahead. May Maximilian Kolbe’s life be a comforting reminder that tragedy speaks ineffably to our hearts and sometimes it creates a phoenix of new life…

Though you walk through the valley of death, you do not walk alone. The world is with you.

25 thoughts on “Massive Loss for Poland”