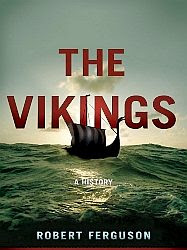 I’m most of the way through a history book called The Vikings, by Robert Ferguson. Reading it is taking me a long time, because I don’t have many spare moments for such luxuries, and a book like this one demands close scrutiny — including the maps and the end notes. It’s a library book, and I’ve already renewed it once. My time ran out, so I’m now paying a dime a day for the privilege of finishing it. But it’s worth it.

The book is a riveting account of the entire Viking Age, from the earliest historical and archeological evidence, through the conversion to Christianity and the merging of various Viking lands with the general culture of Northern Europe. It describes the marauders of the North Sea, the sporadic wars with the Carolingian and Holy Roman Empires, the occupation of the Danelaw in England, the foundation of what became the major cities of Ireland, the repeated attacks on the Franks that eventually resulted the creation of Normandy, the formation of the Kingdom of the Rus in Kiev, and the attacks on Moorish Iberia.

The Vikings were dedicated traders and explorers who braved the most fearsome conditions in the North Atlantic and Arctic Oceans to colonize the Orkneys, the Shetlands, the Faeroes, Iceland, Greenland, and (briefly) Newfoundland. Between 700 and 1100 AD their longships raided and traded from the Black Sea to the Gulf of St. Lawrence, from the White Sea to the Straits of Gibraltar and the Mediterranean.

The story of Iceland is the most fascinating one of all. The island nudges up against the Arctic Circle, and was uninhabited until it was colonized by Norwegian Vikings in the 9th century. The settlers in Iceland evolved the first functioning democracy in Europe since ancient times, and governed themselves without a king or a hierarchy.

In 999 AD Olaf Tryggvason, the king of Norway who had just converted the remaining Norse heathens to Christianity by force, sent a mission to Iceland in an a attempt to convert the Icelanders. It wasn’t the first time such an effort had been made, and there was a Christian minority on the island, but 999 was the year when the Icelanders collectively turned to Christianity.

Olaf’s delegation arrived at the althing — the annual island-wide assembly at the Law Rock in Thingvellir — in June 999 to present their case for the establishment of a legally-based Christian community in Iceland. Thorgeir Ljosvetninggagodi was the elected Lawspeaker, and it fell to him to adjudicate the momentous decision. As Dr. Ferguson writes, “Thorgeir was being asked to set up a separate law code that would have required a separate assembly with its own, Christian, hallowing rituals, so that two communities of faith could carry on separate but parallel lives.”

After retiring to his shelter for a full twenty-four hours to consult with Odin and/or his own native wisdom, Thorgeir made his decision:
– – – – – – – – –

…the decisive factor was unity. Whether the words he spoke were his own, or were dictated to him by Odin, there is no mistaking that this is what Thorgeir saw as the heart of what he had to say about the prospect of Iceland being divided along religious and legal lines: ‘let us all have one law and one religion. For this will turn out to be true, that if we rend asunder the laws we shall also rend the peace.’ From its beginnings in the 870s, Icelandic society, with its Heathens, its handful of Christians, its smattering of godless men who trusted only in their own might and main, and its syncretic gamblers who were happy enough to take out extra insurance against a bad harvest by adding Christ to their personal pantheon, had been what we would today call a pluralistic and multi-faith society. But when crisis threatened in 999 there was no doubt at all in the Lawspeaker’s mind: everyone should believe in the same god, or at least pretend to do so. [p. 314]

Yesterday, when I first read the words “if we rend asunder the laws we shall also rend the peace”, the hairs rose on the back of my neck. This man, a heathen barbarian from a remote frigid outpost of Nordic colonization, possessed more wisdom than all the suave and civilzed intellectuals and politicians in 21st-century Europe.

If we rend asunder the laws we shall also rend the peace.

The peoples of Britain, the Netherlands, Belgium, Sweden, Norway, Denmark, and Germany are already living out the inevitable results of what Thorgeir intuitively understood. Both the law and the peace of Europe have been rent asunder.

Now, don’t get me wrong: I’m not nostalgic for Nordic paganism. I don’t advocate for Asatru. The pre-Christian faith in Northern Europe either permitted or recommended practices — such as slavery, infanticide, and human sacrifice — that lie outside any moral norm I could ever assent to. Some of the annals describing the momentous events at Thingvellir in June 999 record that the heathen faction sacrificed two human victims to the gods in hopes of steering Thorgeir towards the right decision.

As Benno Barnard has pointed out, the moral and ethical structures we take for granted are a legacy of Christianity. Whether by force or by persuasion, they were grafted onto the native pagan substrate that preceded them, and produced a vibrant cultural hybrid that evolved into the marvel of modern European civilization. I, for one, have no desire to return to what went before.

But that doesn’t mean we can’t learn from the accumulated wisdom of all the centuries that preceded Christianity in Northern Europe. Those heathen Icelanders at the althing were onto something.

What do you think they would have said about sharia?