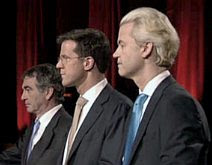 Today’s municipal elections in the Netherlands have made this into yet another Geert Wilders day here at Gates of Vienna. As you all know by now, the PVV came in first in Almere and second in the Hague, the only two municipalities where the PVV fielded candidates.

In a flashback to Monday night, here is a video of the election debate in between Geert Wilders of the PVV and Wouter Bos of the PvdA (Socialists). Many thanks to our Flemish correspondent VH for the translation and to Vlad Tepes for the subtitling:

VH has compiled a report on the event, based on articles from Nu.nl and Elsevier:

According to an internet poll, PVV leader Geert Wilders was the the winner (best debater) in the election debate that was held Monday evening in the Erasmus University in Rotterdam.

The debate really became fierce when the proposition “Islam is a threat to security” was raised during a short one-on-one debate between PVV leader Geert Wilders and PvdA leader Wouter Bos. In it Wilders explained that he views Islam as a threat, and PvdA leader Bos (and his party) as the main culprit for the mass immigration.

The fraction leader of the Socialist Party Agnes Kant [according to Afshin Ellian: “an agressive Bolshevist“] said in a reaction during the debate that it is not Islam, but the PVV of Geert Wilders that is a threat to society. The leader of the PVV, according to her, would not seek solutions, but scapegoats, “and that is life-threatening […] Given the past of the Netherlands it is dangerous to designate scapegoats”.

D66 [liberal-socialists] leader Alexander Pechtold added: “Your politics is a bigger threat than Islam,’’ and spoke of “a xenophobic message”.

HetVrijeVolk linked this article with the title: “The Left is getting ready for the next political murder.”

PvdA leader Wouter Bos “distanced” himself from the remarks of Kant. In his view history would not be needed to make clear that Wilders’ plans are “very unwise”. Bos held it against Wilders that with his positioning he causes Muslims who are cooperative, “to turn away from Dutch society.” Wilders in return blamed the PvdA in Amsterdam for equating gays with liars, and Turkish PvdA members in The Hague for terrorizing the neighborhood there.

The PVV leader received both applause and boos from the audience during his speech, in which he explained that Islam is a violent and totalitarian ideology. He pointed out that relatively many Muslims, and Moroccans in particular, make themselves guilty of violence, intimidation and criminality. He singled out Somalis, saying that they often end up on social benefits. Wilders said that no one from a Muslim country should come to the Netherlands anymore.

The election debate was the last one Geert Wilders contributed to before the elections. The evening before the elections, a number of political leaders [and demonizers such as Maarten van Rossum], met again for a debate in the TV show of the left-wing broadcaster VARA, Pauw & Witteman. This debate is part of the “Festival of Local Democracy”, organized by the PvdA-linked organization bureau BKB [Lennart Booij, Alex Klusman en Erik van Bruggen].