By tradition, Saturday here at Gates of Vienna is either Ranting Day or Poetry Day, depending on my mood and circumstances. Due to the political events of the last week or so, I have used up most of my supplies of rant, so today will feature light verse while I replenish my stores of invective.

There will be real posts later on, but here we go off-topic for a brief interlude.

The late Ogden Nash was the most accomplished American practitioner of light verse in the 20th century. His heyday lay between the wars, although his career and his wit extended considerably after World War Two. In addition to his whimsical poetry, he was renowned for his epigrams. A couple of examples:

Progress might have been all right once, but it has gone on too long. 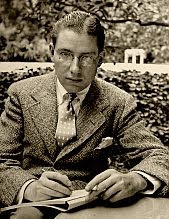 His poems were characterized by absurd rhymes, extravagant diction, and ridiculously extended (or reduced) meter. His most famous examples were very brief eponymous vignettes about animals, but he wrote many other poems which never escaped into fame, and now reside only in dusty old volumes that can be quite difficult to find.

By the time the internet came along, his aficionados had become so few that many of his lesser-known poems are unavailable on the web. The oeuvre of Ludacris or the philosophical ramblings of Eminem are easy to locate in their entirety, but not the poems of Ogden Nash.

I discovered this unfortunate fact last year when I went looking for two of my favorites. They are now obscure, and no amount of googling turned up complete and reliable versions. So I went off to the library the other day and borrowed Verses From 1929 On — which had probably lain untouched on the same shelf since the last time I needed it, fifteen or twenty years ago.

Finding the poems in question proved a formidable task. None of his books has an index of first lines, and any given title bears only the most tenuous of connections to the poem itself. I had to page through the table of contents four times before I finally found both poems I was looking for.

The poem below cried out to be posted quickly, because in a year or two — assuming the economic crisis follows its expected course — his stanzas will no longer be funny.

By then they will be too true.

I Yield to My Learned Brother
or
Is There a Candlestick Maker in the House?
by Ogden Nash

The doctor gets you when you’re born,
The preacher, when you marry,
And the lawyer lurks with costly clerks
If too much on you carry.
Professional men, they have no cares;
Whatever happens, they get theirs.

You can’t say When
To professional men,
For it’s always When to they;
They go out and golf
With the big bad wolf
In the most familiar way.
Hard times for them contain no terrors;
Their income springs from human errors.

The noblest lord is ushered in
By a practicing physician,
And the humblest lout is ushered out
By a certified mortician.
And in between, they find their foyers
Alive with summonses from lawyers.

Oh, would my parents long ago
Had memorized this motto!
For then might I, their offspring, buy
A Rolls or an Isotto.
But now I fear I never can,
For I am no professional man.

You can’t say When
To professional men,
For it’s always When to they;
They were doing fine In ’29,
And they’re doing fine today.
One beacon doth their paths illumine,
To wit: To err is always humine.