In the ongoing discussion in the state-funded Dutch media, the comparison of Geert Wilders with Adolf Hitler and the Nazis has become an everyday occurrence. “Far-right” is the kindest epithet, to which “extremist” is usually appended. “Fascist”, “neo-Nazi”, “racist”, “xenophobic”, “Islamophobic” — all the adjectives familiar to Gates of Vienna readers are routinely applied to the leader of the PVV.

It’s an open secret that Queen Beatrix — officially neutral towards the political factions — intensely dislikes Geert Wilders. Does she, too, fling the “Nazi” epithet in the direction of the turbulent blond? In any case, she has shown herself to be in general agreement with all those left-wing journalists who do.

Queen Beatrix’s father was Prince Bernhard, who — in addition to being one of the two founders of the Bilderburg Group — was reputed to be a Nazi sympathizer before and during the war. The Prince denied any Nazi connections to the end of his days, but the rumor persisted.

However, evidence has recently surfaced indicating that the young prince’s interest in the Third Reich was more than casual. Our Flemish correspondent VH has compiled a report about a newly-released account of Prince Bernhard’s “hidden history”.

First, a translation from De Volkskrant:

Dutch Prince Bernhard was a member of the NSDAP 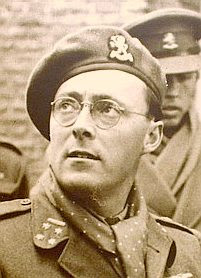 The sympathy of Prince Bernhard for — and his involvement with — German National Socialist organizations was significantly more than he later acknowledged. This is what writer Annejet van der Zijl concludes in her thesis “Bernhard, A Hidden History” which she promoted this Thursday in Amsterdam.

During five years of investigation, Van der Zijl stumbled upon a membership card of the Deutsche Studentenschaft that was signed by Bernhard.

Bernhard himself denied until his death that he was ever a member of the NSDAP or sympathized with the Hitler regime. 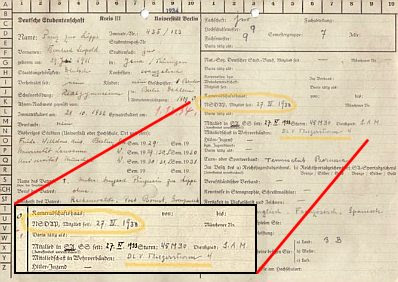 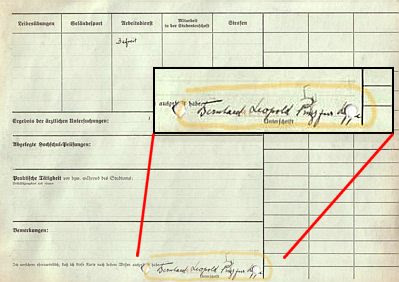 I circled the NSDAP membership registration: April 22 1933, and on the flip side I circled his signature. I also underlined Prince Bernhard’s SA and SS membership since April 22 1933, specifically of the Fliegerstürm, an SS unit:

SS-Fliegersturm was a flying unit of the Allgemeine-SS that was formed Nov 1931 in Munich and was absorbed by the Deutscher Luftsport Verband (DLV) Sep 1933. A special variant of the pilot wings (the SS-SA Fliegerabzeichen, an early SS eagle flanked by the SS and SA logos) was worn by qualified members of this unit.

Socialism runs in the royal family, or so it seems. Prince Bernhard’s NSDAP membership is not unique among Dutch royalty.

The father of Pieter van Vollenhoven (married to Princess Margriet, a sister of Queen Beatrix), was a member of the Dutch National Socialist Party (NSB) before WWII. The husband of Queen Beatrix, Prins Claus von Amsberg, was a member of the Hitlerjügend and a member of the Jungvolk, or German youth movement. “In 1944, he served with the German army in Denmark, and the 90th Panzer Division in Italy […] and in 1945, aged 19, he was captured by US forces near Merano, Italy, and sent to a PoW camp at Ghedi, near Brescia.” In 1966 he married he Dutch Princess (now Queen) Beatrix.

7 thoughts on “Nazis in the Family Tree”