The following article is behind the subscription wall at this month’s New Criterion. The text is an appropriate companion to the subtitled video of the documentary Turban and Swastika, so I have taken the liberty of excerpting some of the key paragraphs here.

It is alive and well today, and is gaining ground on all fronts in ways that Hassan al-Banna, Sayyid Qutb, and Haj Amin el-Husseini could never have imagined, thanks to a worldwide petroleum-based economy and the self-immolation of Western Civilization.

The excerpts below are taken from “Anti-Semitic symbiosis” by Sol Stern, which reviews the book Nazi Propaganda in the Arab World by Jeffrey Herf: 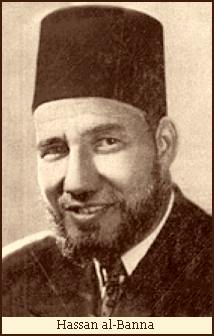 After the military defeat of Nazi Germany the center of radical Jew-hatred shifted from Europe to the Arab Middle East. The foundation for an Islamic version of Nazi eliminationist anti-Semitism had, in fact, already been created in Egypt and Palestine, right under the noses of the British colonial administration. The Muslim Brotherhood emerged from the war as the largest mass movement in the Arab world, with over one million followers and an armed paramilitary cadre of 40,000. The charismatic preacher Hassan Al-Banna launched the Brotherhood in 1928 as a vehicle for a religious awakening, calling on all Muslims to return to the purity of early Islam by rejecting the corrupting influence of Western political ideas and social customs.

By the 1930s, Al-Banna had found much to emulate in the western totalitarian movements in Germany and Italy. Like the Fascists and Nazis, the Brotherhood claimed to speak for the oppressed working class and the unemployed against predatory Jewish capitalism and British imperialism. To the Koranic narrative depicting the Jews as treacherous enemies, Al-Banna appended the modern Nazi doctrine that “international Jewry” was the spearhead of a worldwide conspiracy to enslave the German Volk as well as the Muslim Umma. Al-Banna arranged for the translation and distribution of Hitler’s Mein Kampf and The Protocols of the Elders of Zion, while elements of the Brotherhood’s paramilitary wing volunteered for active duty with the nascent Nazi war machine.

Hitler’s most effective Islamic messenger to the Arabs, however, was the Palestinian Haj Amin el-Husseini. In 1921, the British appointed Husseini as Grand Mufti of Jerusalem (charged with overseeing the Islamic holy places). He soon became the preeminent Arab leader opposing the British mandatory administration. Some Arab nationalists were drawn to an alliance with Nazi Germany based on the political calculus that “the enemy of my enemy is my friend.” But, for Husseini, it was a matter of deep ideological affinity. Even before Hitler came to power the Mufti expressed his admiration for the Nazis and their solution for the “Jewish problem”—at the time, expulsion from Germany—and sent delegations of young Islamists to Hitler’s Nuremberg rallies. Eventually the Mufti took up residence in Berlin, where he played an active role in the wartime extermination of European Jewry.

By all rights Husseini should have been tried and executed as a war criminal. In June 1946, however, the postwar French government allowed him to escape to Egypt, where he was given asylum by King Farouk. Al-Banna’s Muslim Brotherhood and other nationalist groups welcomed him as a returning hero. Al-Banna called Husseini a hero who “challenged an empire and fought Zionism with the help of Hitler and Germany. Germany and Hitler are gone but Amin Al-Husseini will continue the struggle.”

We owe it primarily to the German political scientist and journalist Matthias Kuntzel and to the American historian of modern Germany Jeffrey Herf for connecting the historical dots and showing that the concept of “Islamofascism” cannot be dismissed as a glib political epithet. In his path-breaking 2007 book, Jihad and Jew-Hatred: Islamism, Nazism and the Roots of 9/11, Kuntzel argued persuasively that revolutionary anti-Semitism is at the core of twentieth-century Islamism and jihad, that this is no mere coincidence, and that there is a direct line from the Nazi-influenced Muslim Brotherhood and the Grand Mufti to Hamas, al-Qaeda, and the present government of Iran. Herf wrote the forward to Kuntzel’s book, calling attention to the fact that this connection had so far been ignored by most scholars:

Unmistakable echoes of Nazism’s violent, paranoid conspiracy theories about the evil nature and vast destructive power of the Jews have been evident in the ideological tracts and political purposes of radical Islam since it’s crystallization during and after World War II in Egypt. Yet despite the obviousness of these lineages and echoes, many of the fine works of scholarship and government commissions on the subject mention this connection briefly and, in some cases, ignore it completely.

Herf has now written his own study, Nazi Propaganda in the Arab World, that will hopefully make it more difficult for commentators and government officials to ignore the affinities between radical Islam and Nazi eliminationist anti-Semitism. During the war, the Nazi regime distributed millions of copies of printed works and, through short-wave radio, broadcast thousands of hours of ideological propaganda to the Arab world. Herf has gained access to this previously classified record and analyzes the content of the propaganda offensive. He also adds to the existing scholarship on the activities of Husseini and other Arab exiles in Germany during the war years. Herf concludes that although the Nazis expected to win allies among the Arabs based on mutual opposition to the British Empire, they also sought to “extend Nazism’s genocide of the Jews.” The Nazis were aware of the radical Islamist tendencies represented by the Muslim Brotherhood and the Grand Mufti and this collaboration represented the “diffusion of ideology and of a meeting of hearts and minds that began from very different civilizational starting points.”