Gaia was on the scene in London today, and I spoke to her briefly on the phone after the EDL demo and the Geert Wilders press conference were over. She confirmed the BBC’s version of events: hundreds of EDL demonstrators, very few anti-fascist counter-demonstrators, a successful appearance by Mr. Wilders, and no significant trouble. In her opinion it was a successful day for the Counterjihad in Britain.

Her sentiments were echoed by a Gates of Vienna reader named “G” who also attended the EDL rally in London. En route to the demonstration, he encountered someone unexpected. Here’s his report: 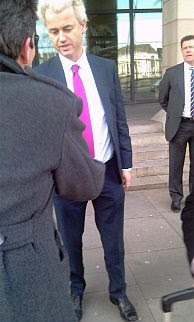 On my way to the demo, whom should I bump into but Geert Wilders.

I reached into my coat for my phone camera, getting — I’m pleased to say — a scary look from his bodyguard.

“Together?” asked the fine gentleman, indicating a shot of the both of us. The bodyguard stood aside, and a secretary came forward to do the honours. I wished him luck, congratulated him on his victory in Almere, and went on my way.

An impressive figure, with an air of easy authority, whom you would prefer to have as your friend.

And here is my take on the demo today:

All in all, it was uneventful, and passed off without serious incident.

I think this was due to three factors. First, the anti-fascists, who had got to Parliament square first, are such a shabby and un-formidable bunch. The main group of them tried to block the road ahead of the EDL march, but the police pushed them back, eventually corralling them behind some vans. There were plenty of anti-fascists milling around and muttering, but their effect was little more than that of a rubber-necker like me.

Second, the EDL appeared to have got the message about the need for discipline, and were headed by a couple of rows of stewards who seemed serious about doing their jobs. They look and sound forceful, even intimidating, but I saw no hint of trouble from them.

Third, the police seemed to take seriously their job of allowing a peaceful demo to pass. They were there in numbers, and more forceful against the antifa pushers and shovers than I would have expected, but nothing excessive. To my surprise, achieved their aims well, and I told one or two of them so. The reaction I got was along the lines that people should be allowed to demonstrate whatever you think of the message, etc. I think maybe they’re embarrassed about their recent Soviet-style tactics with the EDL guys seeking to join an SDL demo a couple of weeks ago.

One or two antifas got carried away for trying to block the road and then not moving back when told to (no sense of manoeuvre or tactical skill). A few of them threw what they thought were missiles — rolled up paper or cardboard. And their bawling about ‘Nazi scum’, and ‘our streets’ got drowned out by the louder EDL chants. The antifas are a negligible bunch, and I would not expect them to have a noticeable effect on history.

That said, I was surprised by the prevalence of the politically correct point of view among passers-by and non-demonstrators. For example, passers-by asking the police what was going on and rolling their eyes at the mention of EDL. Or the few policemen I spoke to taking the “whatever-you-think-of -their-views” line, — in other words, disdain — about the EDL demonstrators. So far as I could gauge from gawking and chatting, anyway.

I got into an interesting discussion with a guy who said he was a journalist (I didn’t get round to asking him who for) summarising Wilders’s speech by saying that Wilders called Mohammed a paedophile. When I pointed out that marrying a six year old and having sex with her when she was nine could be construed as paedophilia, and would be if he or I did it, he agreed but couldn’t get over his block about saying this about ‘the prophet’ Mohammed. When I asked whether he, a journo, might do well to understand plain meaning of language, he walked off threatening that he might “say something rude in a minute”.

Entertaining stuff, but it illustrates how far behind blogs such as GoV the general public are. If there is a head of steam rising, it’s rising slowly. And the English veneer is still in place.

Similarly, such pro-EDL comments as I caught in the crowd were mild and tame. More along the lines of free speech than agreeing with the EDL. Joe Public isn’t comfortable going that far, and would find it embarrassing to admit if he did agree.

For all of that, a successful demo. The antifas sidelined and corralled, the EDL demonstrating effectively and with self-discipline. And the police deployed in sufficient numbers to guarantee the right to demonstrate.

Unless something sparked off after I left, that is. The demo looked like it wasn’t going to run much longer, the EDL had got past the antifas, and the demo in the shadow of Big Ben had taken place.

So I left a touch early and walked fifty yards back towards the Houses of Parliament, where the tourists, day-trippers, businessmen and lobbyists milled about, cheerful and oblivious. Or at least happy to put the business of Islam to the back of their minds for now.

4 thoughts on “An Unexpected Encounter”