Back in 1963 — in the pre-Texas Schoolbook Depository portion of 1963 — the Smothers Brothers put out a comedy album entitled Think Ethnic!. 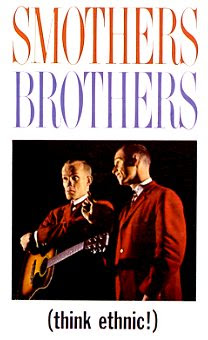 The photo on the album cover is a reminder that those were indeed different times. Back in those days the Smothers Brothers were as edgy and avant-garde as you could get and still be a middle-class white suburbanite. And they were often gut-wrenchingly funny, back before they became overtly political.

In 1963 the word “ethnic” carried somewhat connotations than it does now. It entered the lexicon via the folk music craze, and it referred to such things as Ecuadorian folk dances, African tribal masks, and Thai cuisine. Nowadays, however, in the United States “ethnic” is a code word for “African American”, or in certain contexts, “Mexican”.

The European definition of the word is more amorphous, but one thing is for certain: any European who refers to ethnicity except to promote “cultural diversity” will be classified as a “racist”. There is only one acceptable use of the word “ethnic”, and that is to describe people whose culture is different (and presumably superior) to that of the natives, and whose presence can only enhance and enrich the nations of the continent formerly known as Europe.

Speaking ill of alien ethnicities is not only vulgar and impolite, it is also illegal in some jurisdictions. The cases of Geert Wilders, Lionheart, Ezra Levant, Tomashot, and Charlie Hebdo are examples of what can happen to people who stray from the prescribed multicultural path in any public discussion of Third-World immigrants. 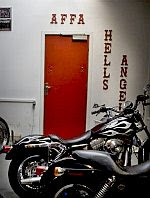 When defending one’s own ethnic group is illegal, it’s no surprise that some of the most prominent dissenters against politically correct orthodoxy are those who never concerned themselves overmuch with legality in the first place. Denmark, as usual, sets the trend, with the Hells Angels motorcycle club taking the lead in defending their ethnic fellows. (See Fighting Fire with Fire, The Jackal Manifesto, and What if Hells Angels Are Right?). The Danish Hells Angels have recently been recruiting new members at a record rate, and many of the new recruits are signing on for the express purpose of defending their own kind.

A parallel has developed in Britain with the English Defence League. The original roots of the EDL lay in the English working class, whose members are the biggest losers in the deliberate multicultural revolution staged by the Labour party in the UK. To be white, English, and proletarian is to be the lowest of the low, the last in every queue, and the object of disdain for everyone else, immigrants and snobby natives alike.

Many of those who were willing to engage in active resistance came from a base of soccer fans, including the “football hooligans” who are notorious for their violent tendencies in public spaces. The EDL has since become much more than that, but there’s no denying the organizational energy that came from a group of people who stood at least partially outside the law. Like the Hells Angels, they had nothing to lose by acting against the dominant paradigm.

In recent weeks a new wrinkle has been added to the Hells Angels story, this time in Germany as well as Denmark.
– – – – – – – – –
The biggest rival to HA in both countries is another international outlaw biker group known as the Bandidos. Unlike the Hells Angels, the Bandidos have proved willing to ally with immigrant gangs and take in immigrants as members. This did not sit well with some of the older and more traditional Bandidos, but they were outvoted by younger members. In response, a significant number of them — including some of the more prominent leaders — have defected to the Hells Angels. For these bikers, solidarity with their own people comes before their loyalty to a particular motorcycle club.

The events described above represent a tendency that does not sit well with the average law-abiding Western citizen. To most of us, motorcycle gangs and football hooligans do not represent the best of our kind. Theft, drug-running, extortion, and grievous bodily harm — these are activities that we prefer not to associate ourselves with.

This presents the ethnic nationalist with a terrible dilemma: when dissent against transnational multicultural orthodoxy is outlawed, who but outlaws will defend our traditional national cultures?

As the economic crisis deepens, the trend towards violent confrontation can only accelerate, since unemployment and the collapse of the currency will greatly enlarge the pool of those who have nothing to lose. When the carrot-and-stick extortion of the welfare state — the promise of benefits and the threat of their withdrawal — no longer has its intended effect, the main barrier to active resistance will have been removed.

Well-meaning law-abiding people can (and do) deplore the idea of regarding the Hells Angels as our ethnic protectors. To deplore is our privilege; we can deplore all we want, and keep deploring right up until our nations adopt full sharia. Deploring is about all we can do, since we have been politically castrated over the past five or six decades.

So what is the alternative?

None of us wants to have anything to do with Jønke, but who else is willing to oppose the vicious and violent behavior of feral immigrant “youths” in the working-class neighborhoods of European cities? And — given the weakness and fecklessness of our law enforcement and judicial apparatus — who else is vicious and violent enough to get the job done?

Unfortunately, at the moment it looks like the only choice we will get is between hooligans and sharia, between Jønke and people like Mullah Krekar. If you had to make the choice — if there were no other alternatives — whom would you choose?

Actually, there is a possible third alternative, namely anarchy and chaos, the War of All Against All. But in the end we will encounter the same dilemma: if the existing system breaks down — which seems a distinct possibility — either the Hells Angels or Mullah Krekar will end up running the show in the ruins of what used to be Western Civilization.

This is not a choice that any of us wants to face. But, if the current suicidal behavior of our political and cultural leaders continues, it may be the only choice we are given.

5 thoughts on “When Ethnic Thinking is Outlawed, Only Outlaws Will Think Ethnic”