Aeneas sends the following exchange taken from the English Defence League forum. I don’t yet have a link for the posts below, but here is the text. Spelling, punctuation, and a little bit of the syntax have been fixed up:

I read the mainly left-wing urban75 forums without posting, and there was a thread called ‘EDL leadership arrested.’ While most of the backwards mainstream leftwing element that post on there were over the moon, this post was an unusual piece of realism: 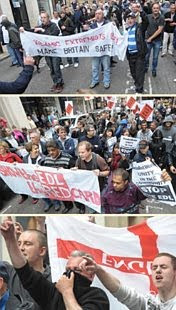 I see. So Police raid self-proclaimed Anarchist squats filled with people who make no bones about the fact that they are there to cause mayhem and yet people on their way to take part in legal protests, and who call for them to be peaceful, get stopped on their way and their homes then get raided by gun toting cops.

You lot want to be stopped by the Police. It’s why you make such a song and dance about the squats and so on. It’s just a game to you. An excuse to have some high jinx all safe in the knowledge that the ‘Pigs’ will pile in and arrest you giving you all some war stories to tell around the fireplace.

The EDL must be scaring the s**t out of the people that matter. Your response of just calling them fascist and so on is so out of touch as to make it embarrassing. I mean the UAF is the establishment. It’s funded by them.

English nationalism is the only real revolutionary movement in the UK at the moment. Yes, the EDL might not be the ones who promote it to its conclusion, but they represent the tip of a very large iceberg of slow-burning resentment that has not had a chance to really articulate itself at the moment. But it will come, and the potential political earthquake that it represents dwarfs anything that the British left can even begin to contemplate.

And the actions of the Police today show that it’s being taken very seriously.

Bloody hell, I read about it and it makes me almost want to join up with them. It’s a f***ing disgrace what happened, and whilst you indulge in your onanist enjoyment at what you see as the right getting one stuck on their chins, take a moment to really think about what these people have actually gone to do in such a short amount of time. And then think about what could be done with the resentment that they are feeling by somebody with half a brain.

It ain’t going to be the BNP for all sorts of reasons, but somebody, somewhere is going to emerge and things could really be up for a serious shaking up.

This was the reply:

Things have moved on. This ain’t the 70s and 80s anymore, despite your yearnings for a time when socialism actually mattered, rather than it just being something desperate to latch on to, just to keep its head above the water.

The EDL are not the BNP. They are not the National Front. And they are not C18. They are a grassroots movement that has sprung out of nowhere, and which nobody within the political establishment (and I include the BNP here) know how to respond to. The left are confusing the fun of a day out and waving their trendy credentials in public with actually coming up with a serious response to this grouping.

Now I don’t think they are going to be storming the gates of Downing Street any time soon but they represent something (not sure myself), and that something has mobilised a segment of the mainly white, but not exclusively, working class in a way that the left has not managed for years, and the fact remains that if any real changes to our political system are going to happen in this country then the group that gets the biggest white working-class support is the one that will bring it about.

17 thoughts on “The Only Real Revolutionary Movement in the UK”