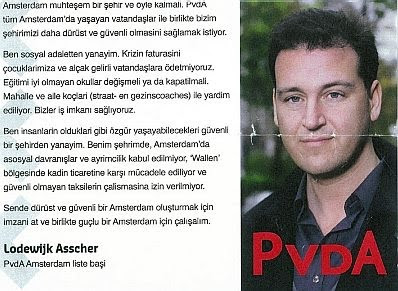 Yesterday I posted an article about Moroccan youths in Gouda who received a payoff to refrain from violence during the New Year’s celebrations. That was a blatant example of extortion on the part of young immigrant criminals — and now comes a blatant example of electoral pandering to the future masters of the Netherlands.

Our Flemish correspondent VH has translated several articles on the issue, and our Dutch correspondent Bolleke has sent in a brief English-language account about the Dutch Left’s shameless deference towards immigrant voters. VH says:

These are Dutch campaign posters for the upcoming municipal elections of March 3, in languages most Dutch people can’t read — well… “most”… at present, that is.

Campaign posters in Turkish and Arabic

“The PvdA (Socialists) are not alone in having posters up in foreign languages.” 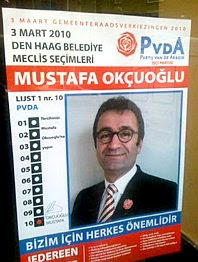 The PvdA (Socialists) consider the issue of the Turkish-speaking campaign poster for municipal elections of March 3 an isolated incident, but ever more such pamphlets keep popping up. In Leiden, Rotterdam, and the Hague, for instance, there are campaign posters of GreenLeft, PvdA and D66 (Center-Left, Anti Wilders party) in Arabic and Turkish.

Besides the PvdA in Rotterdam, the Hague chapter also appears to have a politician touting himself in Turkish. Mustafa Okçuoglu calls the people in The Hague in Turkish to vote for him.

But there’s more. Abderrahim Kajouane has made a poster in Arabic, also on behalf of the PvdA. 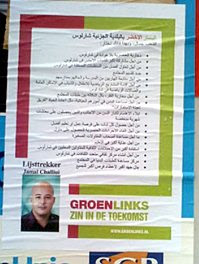 Furthermore, GreenLeft in the Rotterdam-Charlois district published a pamphlet in Arabic. In Leiden the D66 has a poster made in Turkish. And in Deventer there are flyers in Turkish for the CDA (Christian Democrats) and the GreenLeft.

Yesterday it became known that the PvdA in Rotterdam, will withdraw a Turkish-language poster, because it is inconsistent with party policy.

The pamphlets of D66, PvdA and GreenLeft are remarkable, because those parties have learning the Dutch language high on their agenda.

This story from Het Laatste Nieuws gives some idea about why leftist political parties feel compelled to pander to their culturally enriched supporters:
– – – – – – – – – 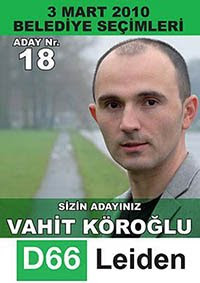 Three PvdA [Socialist] members of the Rotterdam district Feijenoord will receive police protection since they have been seriously threatened by Turkish fellow party members. The reason for the commotion is the messing up of the candidate list for the upcoming municipal elections of March 3, during an assembly controlled by the Turkish rank and file.

The AD reports that the ethnic tensions within the Rotterdam PvdA chapter Feijenoord have gotten out of hand to such an extent that several party members want police protection. “There are three Dutch PvdA members who have resigned, because the chapter is increasingly dominated by Turks.”

Tensions arose after a meeting in which the by the board proposed that the electoral list was completely messed up when Turkish “friends” received a higher position on the list at the expense of women and natives. Out of protest against this takeover “nine Dutch and one Turk who was in solidarity with them ‘(i.e. nine natives and one member of Turkish descent) withdrew as a candidates for council.

Part of the non-Turkish branch of the PvdA does not feel at ease. “These are not direct threats, but it is in the way you are being approached. Strange mail and intimidating glances,” one concerned PvdA member told AD. The spokesman wanted to remain anonymous. The police keep a special watch on his house.

Note: […] Previously there had already been some uproar because PvdA councilors were speaking Turkish amongst themselves during a meeting of the district council. [source: Carel Brendel]

As further background, VH includes this 2008 article from De Trouw:

“Taliban-like figures” hold the PvdA hostage, and the Party does nothing about it. This is the reason that Mehmet Kaplan, leader of the Alevi Muslims, has broken with the Labor Party.

The chairman of the Holland Alevi Foundation, Mehmet Kaplan, has cancelled his membership of the PvdA. Kaplan, a former member of the provincial council (Gelderland) said the widening gap in the PvdA makes him feel less at home because of “Taliban-like figures”, who according to him hold the party hostage.

Kaplan: “I have repeatedly discussed this with the board members of the party. They listened to me but nothing happened. I want that clarity now. I want an inquiry into people who hold positions within the party but have nothing to seek there.” Among other things Kaplan refers to tensions within the PvdA about street coaches in the Amsterdam-Slotervaart district, who because of their Islamic beliefs refuse to shake hands with women. District Chairman Ahmed Marcouch (PvdA) sees no problem in this and is supported by Mayor Job Cohen (PvdA).

Kaplan is irritated by the tendency within the PvdA to welcome Muslims into the party to attract votes, and also offer them party positions, all without ensuring themselves whether the ideas of the recruits match those of the party. Kaplan: “[…] My greatest worry is that the Netherlands might become an archipelago-kingdom where social cohesion is lacking. Apparently we now already have a Taliban island in the Netherlands.”

And from NIS News:

AMSTERDAM, 18/02/10 — A number of parties have been caused embarrassment by Turkish and Arabic-language election posters that have appeared at various places in the country.

Labour (PvdA), the Christian democrats (CDA), center-left D66, the Socialist Party (SP) and the leftwing Greens have posters up on which Islamic candidates are seeking their ethnic group’s voting support. In all cases, these appear to have been initiated by the candidates themselves, without the prior knowledge of the party executive.

The PvdA in Rotterdam has removed election posters solely in Turkish promoting a candidate named Fikri Demirtas. “Posters with slogans in a foreign language are against the internal party line,” said PvdA front-runner Dominic Schrijer. “It is an incident, I regret it. It will never happen again.”

But similar PvdA campaign material is appearing in all kinds of places. For example, a Turkish flyer is circulating in Amsterdam showing a picture of the local PvdA leader Lodweijk Asscher. There is not a word of Dutch on it.

Most other parties are unable to criticise these posters because they themselves also have Turkish and Moroccan candidates with posters they made themselves. CDA, D66 and GroenLinks all have to deal with this.

The conservatives (VVD) expressed anger about the posters. “An election poster in Turkish really cannot be allowed,” fumed VVD’s front-runner in Rotterdam, Jeannette Baljeu. “Statements in public places should be in Dutch.” The VVD did put up a poster in Chinese itself during the previous elections.

Party for Freedom (PVV) MP Sietse Fritsma, also PVV front-runner in The Hague said: “All these parties say they consider it important that everyone here speaks Dutch. But they immediately drop this principle as soon as they can get extra votes from the Turkish or Moroccan community. What unbelievable hypocrisy.”

Hat tip for the NIS News story and the top photo: Bolleke.

3 thoughts on “The Linguists of the Left”