We’ve seen what happens when the people of Europe attempt to mount peaceful protests against the Islamization of their countries. They are vilified in the press and by government spokesmen, denounced as “fascists” and “racists”, and subjected to arbitrary arrests, interrogations, and whatever administrative punishments the authorities can cobble together under anti-incitement laws.

The authorities often find it helpful to use the AFA/Antifa organizations — anarchist groups that call themselves “anti-fascists” — to do the scuffling and breaking of heads, and thus permit official law enforcement to keep its hands fastidiously clean. In Britain the most prominent “anti-fascist” group is UAF, “United Against Fascism”. Their primary mission nowadays is to suppress the anti-jihad activists of the English Defence League, the Welsh Defence League, and the Scottish Defence League.

The latest confrontation occurred yesterday in Edinburgh, where the SDL planned a peaceful demonstration. If you depended upon the local media for your news, you’d conclude that the admirable anti-fascists of Edinburgh had done their civic duty in suppressing the neo-Nazis of the SDL: 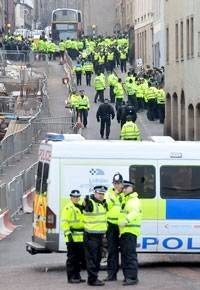 THOUSANDS of people marched through the centre of Edinburgh on an anti-fascist protest this afternoon.

Supporters of the Scotland United rally gathered in Princes Street Gardens to hear addresses from politicians including Justice Minister Kenny MacAskill and city leader Jenny Dawe. They then marched up The Mound and along George IV Bridge to The Meadows.

A breakaway group gathered at the bottom of the Royal Mile close to the Jenny Ha pub, where members of the right-wing organisation the Scottish Defence League were believed to be drinking.

A heavy police cordon closed off the street around the pub to keep protesters at a distance, with officers at times lining up against the pub doorway to prevent anyone stepping outside.

Despite the stand-off, violent outbreaks appear to have been avoided.

There you go! Fascists were stymied, and violence was avoided. Well done, John Peel!

But that’s not quite what happened. Through the magic of the Internet, we can present to you another version of yesterday’s events. Then you’ll be able to see who the real fascists in Britain are. All the familiar elements are in place: a huge police cordon, the refusal to allow the demonstrators to gather, mass arbitrary arrests, tacitly condoned violence by the “anti-fascists”, and raids on the homes of peaceful civilians.

Many thanks to Gaia for sending the following report from the UK:

The SDL (Scottish Defence League) planned a peaceful protest against extreme Islam in Edinburgh yesterday, Saturday 20th December, Many of their English associates in the EDL made their way to join their Scottish counterparts, but according to reports coming from Edinburgh:

Supporters who arrived at Waverley train station were forced back onto trains heading away from Edinburgh by the Police. Those travelling by road were stopped; some had their vehicles damaged by aggressive Police officers.

In the City itself, the Police threatened anyone who attempted to protest with immediate arrest. Meanwhile, far-left so-called ‘anti-fascism’ protesters were allowed to wander the streets without any Police opposition. These same protesters made numerous attempts to attack EDL and SDL supporters, while nearby Police officers turned a blind eye. It is clear that today’s Police actions were politically motivated and that the Police Force as a whole can no longer be considered to be politically neutral. They have chosen their side. No further confirmation is needed other than the statement of the Scottish ‘Justice’ Minister, Kenny MacAskill (SNP — Scottish National Party), when he said that the “fact that the SDL didn’t make it out of Waverley Station is testament to good policing”, though this comes as no surprise as this is the man who, just last year ordered the release of the Lockerbie Bomber, Abdelbaset Ali Mohmed al Megrahi. The word “Dhimmi” springs to mind. [emphasis added]

The EDL issued the following statement at the end of the day’s events:

Today, members of the English Defence League were arrested and denied their civil liberties when attempting to join the Scottish Defence League for a peaceful protest in Edinburgh. The EDL Leadership Team were detained without cause and arrested for “incitement to cause a breach of the peace”. Supporters who arrived at Waverley train station were forced back onto trains heading away from Edinburgh by the Police. Those travelling by road were stopped; some had their vehicles damaged by aggressive Police officers. In the City itself, the Police threatened anyone who attempted to protest with immediate arrest. Meanwhile, far-left so-called ‘anti-fascism’ protesters were allowed to wander the streets without any Police opposition. These same protesters made numerous attempts to attack EDL and SDL supporters, while nearby Police officers turned a blind eye. It is clear that today’s Police actions were politically motivated and that the Police Force as a whole can no longer be considered to be politically neutral. They have chosen their side. No further confirmation is needed other than the statement of the Scottish ‘Justice’ Minister, Kenny MacAskill (SNP), when he said that the “fact that the SDL didn’t make it out of Waverley Station is testament to good policing”.

When the Scottish Defence League attempt to reassert their civil right of freedom of association, we, the English Defence League, shall once again support them. Today’s actions by the police are nothing short of a travesty for democracy, how can the police take action that flies in the face of the European convention of human rights? How are they allowed to act with impunity to subdue the right to freedom of speech and protest as outlined in the universal declaration of human rights. We have duly noted the following contraventions of this declaration that are as follows….

Everyone is entitled to all the rights and freedoms set forth in this Declaration, without distinction of any kind, such as race, colour, sex, language, religion, political or other opinion, national or social origin, property, birth or other status. Furthermore, no distinction shall be made on the basis of the political, jurisdictional or international status of the country or territory to which a person belongs, whether it be independent, trust, non-self-governing or under any other limitation of sovereignty.

No one shall be subjected to arbitrary arrest, detention or exile.

Everyone has the right to freedom of thought, conscience and religion; this right includes freedom to change his religion or belief, and freedom, either alone or in community with others and in public or private, to manifest his religion or belief in teaching, practice, worship and observance.

Everyone has the right to freedom of opinion and expression; this right includes freedom to hold opinions without interference and to seek, receive and impart information and ideas through any media and regardless of frontiers.

Nothing in this Declaration may be interpreted as implying for any State, group or person any right to engage in any activity or to perform any act aimed at the destruction of any of the rights and freedoms set forth herein.

We seek the government and the police to examine article 30 in particular as the actions of today are in serious breach of the universal Declaration Of Human Rights.

We cannot stand idly by and allow the forces of fascism to take over our country. Our ancestors fought for their civil liberties and we shall do the same. When we return it will be in greater numbers. If we are again denied our civil liberties and our basic freedoms, by fascist forces, we will not give up. We will return again and again and again. We will keep returning until our rights are acknowledged and restored. If freedom is denied to us now, it can and will be denied to anyone and everyone else sooner or later. We will never surrender our freedom to fascists, whether they call themselves ‘ministers’ or call themselves ‘police’ or call themselves ‘anti-fascists’! Indeed, Winston Churchill said that the next wave of fascists would call themselves ‘anti-fascists’; today, to Britain’s shame, Churchill was once again proven right.

The EDL and our sister Defence Leagues will be gathering in London, at the Houses of Parliament on Friday the 5th of March (2pm), to show our support for another great man who is fighting against modern-day fascism: the Dutch MP Geert Wilders. All are welcome to join us. Our righteous forces of freedom will always triumph over those who support tyranny.

No surrender to fascism!

Meanwhile, on their way to join their Scottish associates, the leaders of EDL (English Defence League) were arrested at Luton airport and held in custody for seventeen hours for questioning. Their homes and those of their families were raided by armed police, were searched and computers and mobile phones were removed.

Today they have issued a further statement regarding these arrests and later this evening will be posting videos on Youtube about the current state of affairs:

The Arrest Of The EDL Leadership Team

While in custody the team members homes and families homes were raided by police armed with automatic machine guns which terrified the leaderships family which included small children and other older family members. Computer equipment was seized during the 3 hour raid.

Leadership team members were banned from attending any meeting with more than 3 edl members then bailed to return to a police station in Sheffield in the near future.

We are asking every member of the EDL to be available to protest outside the police station when the team has to answer bail. (date to be confirmed).

We need to get the message across that we will not be silenced by being bullied by the authorities and our struggle against muslim extremism will continue.

We have agreed to cancel the Bradford demo as a small concession but will be announcing further protests as a result of the disgraceful treatment of our leadership team.

This is a call to mobilization.

We need every single person who supports the EDL to stand up and be counted and when required we need you to take to the streets in a peaceful and law abiding manner to support our leadership. More details will be released regarding demonstrations in the very near future.

If any EDL Members are arrested by the police please let EDL Media know as soon as possible as we are forming a group action and will be making an official complaint to the authorities in the near future.

Thank you in advance for your support.

A video statement will be released within 24 hours of this notice.
Released on Sunday February 21st @ 13.21
Homepage

8 thoughts on “The Jackboots of the “Anti-Fascists””