Srdja Trifkovic has published a new book, The Krajina Chronicle: A History of Serbs in Croatia, Slavonia and Dalmatia. Readers who are interested may order it using the PayPal/credit card button at the Balkan Studies site.

The Krajina Chronicle: A History of Serbs in Croatia, Slavonia and Dalmatia
by Srdja Trifkovic, with an Afterword by Michael M. Stenton 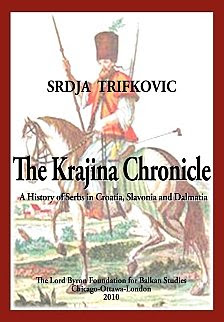 This pioneering work takes the reader through more than half a millennium of the rich and tragic history of the Krajina Serbs. They endured an attempt to exterminate them in 1941-45 that horrified even the Germans. Most recently they were ethnically cleansed from Croatia, aided and abetted by the Clinton Administration. Dr. Trifkovic ably shines the light of truth on this, a crime that is still largely ignored in the West.

Dr. Trifkovic has written a long overdue history of the Serbian warrior farmers who for centuries formed the first line of defense against Islamic incursions into Europe. It is a story of heroism and tragedy. It ends with mass expulsion of the Krajina Serbs in 1995 from their ancestral lands, abandoned by their fellow Serbs in Belgrade and former allies abroad. This excellent book is essential reading for anyone who seeks to understand the often complex and violent history of the Balkan powder keg.

This comprehensive study provides the best explanation yet of the fact ignored by most media and Western governments during the 1990’s Balkan upheavals: that rather than being bent on conquering the lands of other peoples, the Serbs in what is today’s Republic of Croatia were actually trying to hold on to their historical native soil. It casts light on one of the most egregious violations of human rights that continues to be ignored by the “international community” — the right of the ethnically cleansed Krajina Serbs to return to their homelands.

This book brings together in one short volume episodes of European and South Slav history which are known only in fragmentary form.

2 thoughts on “New Book by Srdja Trifkovic: “The Krajina Chronicle””