The article below is not brand new, but it’s the first I’ve heard of the issue. And I must say, my sympathies lie with the indigenous people in this case. 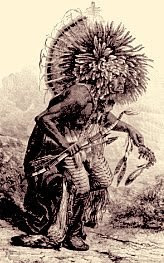 This story is the type to warm the cruel cockles of a conservative’s heart, because it puts the liberal mind into brain-freeze:

Native Canadians do it, so it must be good. But wait! It’s ethnic cleansing — yow! What can we do? I know — we’ll rename it “preservation of indigenous ethnic heritage”. There. That’ll fix it! Now it’s OK.

You’ll notice that the Indians of the Kahnawake reserve are being strict about their renewal project: they want to get rid of the half-breeds along with the outlanders. Time to purify the blood! The Mohawk chief says, “This isn’t about ethnic cleansing. It’s about self-preservation.”

Indeed it is. So why are the Mohawks in Quebec permitted to practice it, while the Serbs in Bosnia are not?

How about Norwegians in Norway? The Dutch in Holland? The Austrians in Austria? And the English might begin by cleansing Whitehall of all those Scottish interlopers.

Here’s the story from The Winnipeg Free Press:

MONTREAL — The Mohawk grand chief of the Kahnawake reserve south of Montreal doesn’t like hearing comments that describe the upcoming eviction non-natives from his community as “ethnic cleansing.”

As many as 26 residents considered “non-native” are being forced from the reserve, receiving eviction notices informing them they have 10 days to leave.

Grand Chief Mike Delisle says it’s always been clear that Mohawks living on the reserve must leave the territory if they marry outside the community.

“People out in the exterior Canadian society should educate themselves before they formulate their own opinion,” he said in an interview with The Canadian Press.

“ This isn’t about ethnic cleansing. It’s about self-preservation.”

The community declared a moratorium on mixed marriages in 1981 and after consultations, a Mohawk membership law was formalized in 1984 and then updated with 2004.

Delisle says the band council is just asking people to abide by the law.

“We’re not looking to be anything like what is being described as the Third Reich or any part of Nazi government,” Delisle said Thursday. “We’re not killing people.”

He’s right about that. Ethnic cleansing is not genocide. Genocide establishes killing as a goal, but during an ethnic cleansing, death is an occasional side effect, not the main task at hand. When two groups hate each other, and one decides to drive the other from its territory, killings occasionally result. But they are a by-product, and not the primary process.

He added that while the law has been in place for the past six years, the issue was only raised by community members at a public forum 18 months ago and it took that long to get a consensus on a course of action.

“Some people have (obeyed the law) and some people have chosen not to and this has created the problem that we are addressing right now,” Delisle said.

Tracey Deer, publisher of The Eastern Door, the local paper and website, says everyone agrees native land is for native people, but the issue is dividing the Mohawk community.

“Everybody’s angry on both sides,” the 31-year-old woman said in an interview.

“They say it’s about time and ‘get these white people out of here’ and then there are people who say we can’t do this and the tension is building.”

Some questions for our Canadian readers: Can they do it? What will the HRCs say about it? Does Quebec have different rules about such matters than the rest of Canada?

Deer, who is married to a Mohawk, says she can’t see how the community will become stronger by splitting up people who are in romantic relationships — some for as long as ten years.

“These people are happy, they are in love and we’re saying ‘No! you can’t,” she said. “This is wrong.”

Deer says young people growing up in the Mohawk community are forced to make tough choices.

“It’s a horrible burden to grow up knowing you have to choose possibly between love with a fellow human being or my community, where my family, my culture and my home is.” she said.

Delisle argues that the contentious issue of the eviction of non-natives is not new, noting that it has come up in the past — in the 1950s, 1960s and 1970s.

He also points to an online poll that suggests more than 60 per cent of the community supports the actions being taken.

Delisle says the band council is not heartless and is willing to negotiate with those who cannot leave within the 10-day eviction period.

But he hints there may be more evictions among the population of 8,000 in the future.

“There are other diverse issues that are going to come up with families that have been here for a long time,” he said.

“This is the beginning of where we’re going to go, I’m not sure where it’s going to end.”

Sandra Schurman, 44, has lived in Kahnawake all her life, and even though she’s recognized by the Department of Indian and Northern Affairs as a status Indian, she is not in the Mohawk membership registry.

She was rejected for membership because she did not meet the 2004 law that requires a person to have at least four Mohawk great grandparents.

Schurman, whose 67-year-old mother married a white man, was rejected because elders ruled only three-and-a-half of her four grandparents are native.

Her mother and father, who’s 73, are still living on the reserve.

Schurman may be the next in line to be evicted, but she doesn’t see it happening.

“If they try to evict me they’re going to have to evict every half-breed in Kahnawake and the town would be half empty,” she said.

Schurman said there are at least a couple of hundred of people on the reserve with Mohawk mothers and non-native fathers.

“I’m waiting for all this unfairness to someday be over with,” she said.

“I was raised here, my family is here. I have no other home and as far as I’m concerned I’m a Mohawk and nobody is going to tell me what I’m not.”

As long as different ethnic groups live closely commingled and unassimilated, the tensions leading towards drastic solutions will always be there. Ethnic cleansing is the kinder, gentler alternative to genocide.

The above options are only necessary because of the foolish and/or malign immigration policies practiced by our governments. The matter of Indian tribes in North America is a special case, but what about the Moroccans in Rotterdam? The Arabs in Dearborn? The Somalis just about anywhere?

The policy failures that produced these catastrophes-in-waiting occurred within living memory.

We’re circling the drain now as far as immigration is concerned. Options more pleasant than “ethnic cleansing” are rapidly being foreclosed, if indeed they still remain open.

159 thoughts on “Mohawk the Model”