Our Flemish correspondent VH has collected and translated three pieces about “Auntie Els”, a.k.a. Els Lucas, the lawyer who is one of the primary forces behind the prosecution of Geert Wilders. The first is a blog post, the second a news article, and the third an op-ed about “Auntie Els” from Afshin Ellian.

It should be noted that Afshin Ellian — who escaped from Islamic tyranny in Iran — is one of the eighteen witnesses which Geert Wilders proposed to call in his defense. Today the Court decided that Dr. Ellian will not be allowed to testify at the trial.

Els Lucas: “Wilders should follow the example of Barack Obama” 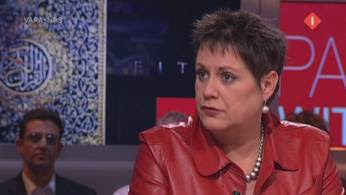 Hastily asked to the table of Pauw & Witteman [TV news and discussion show hosted by the left-wing broadcaster VARA], I once again notice the importance of giving a thorough explanation of the phenomenon of freedom of expression. Contrary to what Mr. Wilders and his supporters would have us believe, the decision of the Court on 21 January 2009 is a victory for the democratic constitutional state. It does indeed appear as if he “may now absolutely not say anything anymore”, but that is precisely not the case. The Court has very clearly indicated that a parliamentary representative has a large degree of freedom in his/her expressions, but also that such freedom does not go so far as to allow everything.

Both the prosecution and the Court confirm that there is much freedom to criticize an ideology, even with strong words. The core of the problem, I believe, is that a whole group of people are stamped as undesirable criminals. Wilders also fools his supporters by saying — or at least by and large evoking the impression — that closing the borders for a specific population group is the solution for all problems that arise in Dutch society. Designating a scapegoat, that is called. A missed opportunity, I think. Wilders should follow the example of Barack Obama, who managed to turn feelings of fear into hope for the future, not by excluding people, but rather by seriously reaching out his hand, even to his opponents. He thereby also succeeds in joining hands by making it clear that every single individual has a responsibility for carrying the whole.

And from De Telegraaf:

Two days after the first session of the trial against Geert Wilders on January 20, unknown persons hacked the office website of lawyer Els Lucas with “a deluge” of virus infections. Lucas was/is the driving force behind the prosecution of Geert Wilders.

As a result of the hacking the site of the firm Nauta & Lucas Lawyers in Lelystad was down. Since her notification of action against Wilders, Lucas has received many hate mails and also had to endure threats by e-mail.

Anyone who participates in the public debate is subject to all possible insults. As long as the facts are straight, it is the unpleasant and yet inevitable price to pay for this. It is a game. Playing with words. Words without threats or threats of violence.

Els Lucas is a prominent PvdA [Socialists, Labour] member in Lelystad. She is a city councilor for the party. In response to the statements of MP Geert Wilders she decided to file a complaint against him. The PVV leader, according to Lucas, should be prosecuted for sowing hatred and incitement to discrimination.

Since then Madam Lucas has regularly appeared on the tube. The television has acted as the counterpart to Wilders. She has done that quite frequently. For example, she recently appeared on NOVA [TV news discussion show] where she got into a debate with a VVD MP on this issue. Whoever thinks about the prosecution of Wilders cannot avoid this PvdA member in Lelystad. We live in a free country. And this is allowed. Lucas may hate Wilders and hope he will be prosecuted by the Public Prosecutor [OM, Public Ministry]. So far, nothing is the matter. Overnight, thanks to Wilders, Lucas has become a well-known Dutch citizen.

In last Saturday’s Volkskrant, Wilders and Bosma wrote an article [Advised by the Toilet Duck] in which they defend themselves and their party against all allegations. In it they wrote: “A short half-hour state broadcast provides a dreary queue of NSB! NSB! announcers. Come on in, great thinkers like Herman van Veen and Peter R. de Vries. Els Lucas of the PvdA [Socialists] was one of the plaintiffs last week in the trial against freedom of expression. To ease her work for the party, minister Ter Horst (PvdA) had already opened a new front.” Now Els from Lelystad is very angry, no, furious with Geert. How can that be?

Has Geert Wilders filed a complaint against the lawyer Els from Lelystad? Does Els now have to stand trial because of a declaration by Geert? No. Why the hell then is she outraged? What happened to you, Els? Is Lelystad no fun anymore? What is going on? Are you unable to find any more clients? Did NOVA or Pauw & Witteman not invite you anymore? Did your husband, your wife, your friend or your dog or your cat run away? Els, super-girl from Lelystad, what’s up?

This site reported the cause of the anger of Els from Lelystad: “Geert Wilders refuses to retract his allegation about the Labour Party membership of the lawyer Els Lucas. Lucas is one of the driving forces behind the prosecution of the PVV leader. On Saturday De Volkskrant published an article written by Geert Wilders and Martin Bosma in which it was stated that Lucas is a member of the Labour Party and that is one of the reasons for her role in the trial against Wilders.” Good name? What “good name”? Day in day out, in NOVA, at the Pauw & Witteman show, and many other venues, Els calls Geert a racist, a hatemonger, et cetera.

You are lucky, girl. Golly, how lucky you are. Why?

Wilders did say one more thing: Els is a member of the PvdA, which is difficult to deny. That is rather neutral and nice. You’re lucky Els, because someone in the position of Wilders could have written: “The creepy PvdA member from Lelystad tries, as did those scary aunties from the dark times, to silence freedom of speech.” Wilders has really been rather nice to Els. He did not say this.

And the good name of Els? That was already besmirched by Els herself. Someone who in freedom deliberately wants to restrict another’s freedom can hardly lay claim to a good name. The public debate is not just for complaint-filers, but also for the accused to defend himself. The politician from Lelystad must understand that the accused has also the right in a public debate to defend himself, even in severe terms.

Dear Auntie Els, this is called freedom. And an army of PvdA lawyers cannot take that away from us.

Yet Els says that her “good reputation and honor as an independent citizen and lawyer” is affected. Excuse me: you are no longer a member of the PvdA? Are you ashamed of that party?

Many thanks to KGS for the Kangaroo Kourt image.

9 thoughts on “Auntie Els: The Judas of Free Speech in the Netherlands”