“No matter what Muslim leaders do, there will be more friction with the West—regardless of al-Qaeda. There will be more confrontation between the West and Muslims, with attacks even bigger than in 2001.”

Earlier this month Erick Stakelbeck posted his videos interviews with Muslim extremists and Al Qaeda sympathizers who live unmolested in London, many of them at public expense.

One of the British Salafists he interviewed is named Saad al-Faqih. Al-Faqih has been designated a terrorist by the U.S. government, and is wanted by the Kingdom of Saudi Arabia, but the British government has declined to extradite him. Al-Faqih refused to appear on camera, but he did consent to be interviewed. Mr. Stakelbeck paid a visit to the terrorist’s home, and has posted an account of the occasion at CBN. Some excerpts are below:

I had come to London to interview men the U.S. government considers extremely dangerous; Islamist ideologues with intimate knowledge of al-Qaeda’s inner workings. And according to intelligence sources, al-Faqih surely fits that bill. 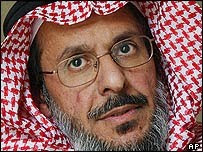 A former medical surgeon, Al-Faqih now makes a living as one of the world’s most vociferous enemies of the Saudi regime. He wants to see the Saudi royal family removed from power (by peaceful means, he says) and replaced with an even more extreme Islamic government than the Saudi Wahhabis currently operate. The Saudis, naturally, do not like this, and have been pressuring Great Britain for years to deport al-Faqih back to Saudi Arabia to stand trial. But the Brits, as I explained in my recent CBN News report and in an appearance with Sean Hannity on Fox News, refuse to extradite al-Faqih and other wanted Islamic terrorists back to their home countries over human rights concerns. Basically, they fear the Saudis will torture al-Faqih and the others, most of whom gained asylum in the UK during the 1980’s and 90’s and now walk the streets of London and other cities as free men.

Al-Faqih has built up a dubious reputation during his time in Britain. He was designated by the United States and UN as a global terrorist in 2004 for his links to al-Qaeda and Osama bin Laden. Among the charges against him is that he paid for a satellite phone that was later used by bin Laden to help carry out the 1998 Africa Embassy bombings. Here’s more on that, from PBS’s Frontline:

Saad says he’s never met bin Laden, but he is connected somehow. For one, the satellite telephone that bin Laden allegedly used to plan the Nairobi and Dar es Salaam bombings was purchased from a merchant in Columbus, Ohio, on Saad’s own credit card.

Al-Faqih made clear from the outset that he did not want to appear on camera and was highly suspicious of CBN’s Christian orientation. But he got over his initial misgivings quickly enough and in a wide ranging, hour-plus interview, went on to answer my questions about a variety of topics. Here are some of the most intriguing observations I took from our interview:

Al-Faqih told me al-Qaeda’s structure “can never collapse.” He says it consists of three circles. Inside the first circle is what he calls “the real al Qaeda team who have given homage to Osama bin Laden or other leaders.” Inside the second circle are those who have trained with al-Qaeda but have not formally been accepted into the group. The third, and largest circle, according to al-Faqih, is made up of Muslims who are ready to join al-Qaeda and are looking for the means to enroll in the group (there is no shortage of this type on U.S. soil). Al-Faqih stressed that there are “always new recruits” eager to link up with bin Laden and co. He attributed al-Qaeda’s popularity to there being “no movement in the middle that can satisfy the Muslim world’s hunger for dignity” after years of being, in his words, humiliated by the West. In short, he believes Al Qaeda is the vanguard of Muslim resistance to the hated West, and that there is no other credible alternative to the group. “There has been a failure of Muslim leaders to channel their people against America,” Al Faqih said. ‘But bin Laden has shown people that he can do it.”

Al Faqih blasts America’s longstanding support of the Saudi regime and Israel and labels it as the main cause of Muslim rage against the U.S. This is essentially the same screed we hear time and again from Bin Laden and his top deputy, Ayman al-Zawahiri, in their audio and videotapes. Sadly, it is often enticing to the ears of the Left, many of whom seem to believe that if we just ditch our support for Israel, the terrorists will leave us alone. This ridiculous, naive view discounts 1400 years of Islamic jihad and military conquest against the West, most of which, obviously, occurred before Israel was reborn as a nation in 1948. But I digress.

Al-Faqih’s highest praise, however, was reserved for Yemen-based Al Qaeda cleric/recruiter, Anwar al-Awlaki, a man who has captured numerous headlines in the U.S. over the past few months for his relationships with both Fort Hood shooter Nidal Hasan and the Underwear Bomber, Umar Farouk Abdulmutallab.

“I highly recommend that you read him in English,” al-Faqih said of al-Awlaki, who lived in New Mexico for a time and also attended college in the U.S. “He is a jewel for you. He is very impressive and sophisticated, very linguistic. He is very powerful. His message is that America must change its entire foreign policy. You cannot defeat him.”

I found Al-Faqih’s glowing praise of al-Awlaki very significant. It’s obvious that the 38-year-old Awlaki is moving into the top echelons of Islamic ideologues in terms of global influence. This ascension has serious ramifications for the West. As mentioned, al-Awlaki spent significant time living in the U.S., is fluent in English and knows American culture and customs very well. This has increasingly made him the “go to” cleric for radical young Western Muslims who are seeking to join al-Qaeda.

Al-Faqih closed our lengthy conversation by calling us a taxi. As we got up to leave, I asked him how he saw the conflict between the West and the Muslim world playing out over the next few years.

“No matter what Muslim leaders do, there will be more friction with the West—regardless of al-Qaeda,” he told me. “There will be more confrontation between the West and Muslims, with attacks even bigger than in 2001.”

4 thoughts on “A Lion of Al Qaeda in London”