Note from the Baron: We have been having problems with Blogger arbitrarily chopping off posts from our main page. On the off-chance that this bleg post is responsible, I have truncated the older parts of the post.

Thanks to all who donated to Gates of Vienna. For those who haven’t contributed yet, the tip cup is on our sidebar. 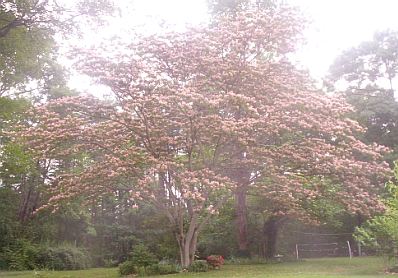 Update from Dymphna: Rather than another snow picture or the banner with the storm tossed mimosa tree (we’ve had a thaw and the snow is beginning to let go its grip now) it seemed more appropriate to end this fund-raiser with an image of the mimosa in all her glory.

For at least another four months there is no way to know if she survived the damage. Will she come back to bloom again as she has for so many years? Or will she be a memory shared by all those who sat under her branches for decades of Midsummer’s Eve parties, watching the fireflies come up out of the growing dark while waiting expectantly for the fireworks to begin?

Thanks to our donors from today: Canada, the UK, and Denmark. In the U.S., it was California, Connecticut, New Mexico, and Iowa again, plus a new person from Washington state. I hadn’t noticed before but nearly all our donors are men. What brought it to my attention was writing a thank you note today and starting it with “Dear Ms”… that brought me up short as I realized I hardly ever begin that way. Interestingly, when it comes to subscribers this is reversed. More women choose the pay-by-the-month method. I like it too, as it gives me a chance to touch base more often.

Men or women, I have a question for our American readers: are there subjects or themes you’d like to see addressed, or addressed more regularly than we’re doing at the moment? We’re not a “breaking news” blog, unless a story happens to hit at the moment we’re sitting at the computer —e.g., the the Dutch Cabinet fell over the weekend. Our correspondent, H. Numan, translated the Telegraaf story and sent it immediately. Since I was up late doing notes, I was able to post it immediately. Usually, though, we prefer to let the circumstances develop more in order to see what further information surfaces. That Mossad story, for example.

As the midterm elections come closer this year, we will be posting more on the seats that are up for grabs. Congressmen are biting their fingernails and kicking the dog right now, dreading that moment of truth in November. But how about other subjects? Schools? Race relations (might as well go for broke!), the Tenth Amendment phenomenon as it spreads through state legislatures? Book reviews? Obama’s executive style? Israel? Afghanistan? Free speech? (Hillary Clinton recently gave an excellent talk on the subject of free internet speech. Yes, Clinton! She who thought we all needed supervision has now decided that China needs to lighten up) Whatever it is, send me an email and let me know. With someone requesting it, I’m more likely to follow through. That’s not fool-proof however: I’ve yet to finish a request for a list of conservative reading.

One very faithful donor says he’s find it rough going lately with all the bad news we report. I agree, much of it is awful. But underneath some of the awfulness there is hope. People are beginning to demand change and that often generates disorder and mayhem. If all were peaceful, there would be no change. However, his point is well-taken. I shall have to move past the MSM “ain’t-it-awful” kinds of stories to look for more meaningful reports.

This has been a good week, full of wonderful emails and great subject lines in the pay pal donation notices. Y’all have a great sense of humor and are most complimentary. Thanks.

Below is part of a favorite poem by Wallace Stevens. It’s been recited many times under that mimosa tree on Sunday mornings in June. Even if she is mortally wounded and can’t come back this time, we have those memories of Mid Summer’s Eve Past.

She says, “I am content when wakened birds,
Before they fly, test the reality
Of misty fields, by their sweet questionings;
But when the birds are gone, and their warm fields
Return no more, where, then, is paradise?”
There is not any haunt of prophecy,
Nor any old chimera of the grave,
Neither the golden underground, nor isle
Melodious, where spirits gat them home,
Nor visionary south, nor cloudy palm
Remote as heaven’s hill, that has endured
As April’s green endures; or will endure
Like her remembrance of awakened birds,
Or her desire for June and evening, tipped
By the consummation of the swallow’s wings.

The End of Winter When Afternoons Return

Update from the Baron: The above title is wishful thinking on my part. 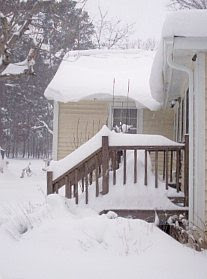 Although today was a thaw day, winter is not yet done with us. It’s all but certain that we’ll have more climate change before the Ides of March. And if it covers up the daffodils after they bloom, it wouldn’t be the first time.

When I arrived home this afternoon, the last fifty feet of our driveway — which is cold and shady, and is always the last place to melt — had finally thawed. For weeks I have been driving in and out on top of a packed crust, but while I was gone it had loosened up. Suddenly the car’s wheels sank into about eight inches of slush, so I was almost unable to park by the front walk.

While I was gone people obeyed Dymphna and made the tip cup clink repeatedly. I believe she reported some of these locations already, so I may be duplicating part of the list. But I see Illinois (2), Indiana, Maine, New Hampshire, North Carolina (2), Oklahoma, Alberta, Brazil , Denmark, Spain, and the UK. Very multicultural!

Thank you all once again for your generosity. Considering the hard times we’re in the midst of, the response has been amazing.
– – – – – – – – –
It’s gratifying to watch the growth of the Counterjihad network. There are so many more people tuned in to the nature of the problem than there were just three years ago — and so many fewer who can be cowed by being called “racists”.

The wind appears to be shifting. It may not be at our backs just yet, but it’s certainly moving in that direction.

I appreciate all your help, and I’m honored by your willingness to get involved.

The epigraph for this update is from “Poems of Our Climate” by Wallace Stevens. The first stanza is below:

6 thoughts on “A Desire For June”