Early this morning, Editor-in-Chief Tøger Seidenfaden of the Danish newspaper Politiken — “The New York Times of Denmark” — announced that his paper had reached a settlement with the “descendants of the Prophet Mohammed”. Without admitting wrongdoing, the newspaper apologized for any offense that its printing of the Mohammed cartoons, especially Kurt Westergaard’s “Turban Bomb”, might have inflicted on Muslims. 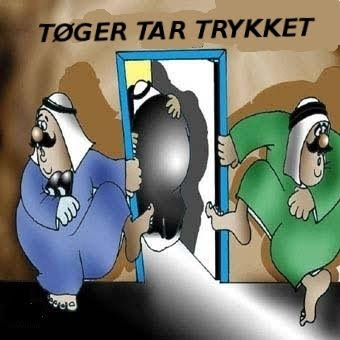 
My initial reaction to this news was speechlessness. Then, when my aphasia passed, I said, “Those craven dhimmi lickspittles! They don’t deserve to be Danes! Revoke their citizenship! Send them back to Sweden, where they belong!” etc. etc., until Dymphna had to leave the room.

The English-language MSM reports of the event — see Politiken itself, The Copenhagen Post, and Al-Arabiya — were not adequate for my purposes, so I asked our Danish correspondent Kepiblanc to prepare a report for Gates of Vienna’s readers. He kindly and promptly provided the following essay, drawing on recent Danish history for his parallels.

A day of infamy: The “Field Mattress” reborn
by Kepiblanc

“There is something rotten in the state of Denmark.”

Never have those words been truer than today. So you assumed that our friends in the press could not possibly submerge themselves any deeper into the slime of submission to Islam? Think again!

More people are on the Islamic death row, such as cartoonist Kurt Westergaard, who on January 1st had a friendly visit: a true believer from the Religion of Peace & Trade, armed with an axe and a knife. But that incident was by no means the first, nor will it be the last. Back in 2008 the Danish Police Intelligence (PET) foiled a plot by some (partly home-grown) holy warriors who wanted to pay him a friendly visit with some explosive devices.

As a gesture of solidarity with their fellow worker-of-the-press, eighteen Danish newspapers — and that constitutes the bulk of them — reprinted his cartoon. Yes, even the daily Politiken. Accordingly another outbreak of SJS ensued. As usual, with burning flags and all that jazz. This time with a bit of spicy refinement added: litigation. A Saudi-Barbarian land shark, one Yamani, sued those eighteen papers, demanding an apology — or else…

How can some savage from Saudi Barbaria sue someone in Denmark? Well, of course he can’t. All its shortcomings notwithstanding, Denmark is a civilized country — so far. Accordingly, the editors-in-chief more or less ignored the punk — who claimed to represent around 75,000 persons descended from a pedophile mass murderer who died 1,400 years ago. All those offspring appeared to be very, very insulted and suffering from acute post-traumatic distress syndrome. Or so he says.

The papers printed the indictment, and then placed it where it rightfully belongs: in the big forget-it drawer. Apart from one significant newspaper: Politiken.

And allow me to digress here: Maybe our readers are familiar with such dailies as “The New York Traitor Times”. But whereas that paper’s treason is of recent origin, the daily Politiken goes way back when it comes to treason. Starting around WW1 it consistently back-stabbed Denmark, Danes, and everything Danish, culminating during the Nazi occupation of Denmark, when it catered to the Herrenvolk from first to last. Shamelessly and without any hint of blushing. 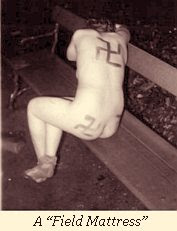 During that bleak period of our history other Danes fell into disgrace as well. Among them were some girls of a certain very old profession who became known as “field mattresses”.

Today we saw that term revived. Politiken (among Danes: “Samarbejds-Politiken” — “Collaborator-Politiken”) is the contemporary “Field Mattress of the Press”. It caved. Totally. Unconditional surrender to Islamo-fascism. It apologized.

By doing so, its editor-in-chief, one Tøger Seidenfaden, not only back-stabbed his fellow editors, but encouraged the entire Ummah. And if there is something the Ummah can actually do — which isn’t much, besides breeding — it can smell blood. From now on all Danish print media will have to enlarge their mailboxes and hire untold armies of lawyers to cope with a deluge of litigation from offended Muslims. Or cave. Bend over. Qui vivra verra…

But there’s no cloud without a silver lining: all political parties in Denmark, except one — “The Radical Left” (another misleading name, rightfully “The Confused Party of Lost Lunatics”, 5% of votes) — unanimously condemned the high treason. And so did all the other newspapers. To say nothing about the larger Danish populace. The waters are dividing rapidly now, and this time the Danish “elite” can’t hide behind a well-trained, disciplined Wehrmacht. All it has is a hodgepodge of savage, illiterate, disorganized riff-raff of “Holy Warriors”.

Good luck with that, Field Mattress!

24 thoughts on “A Day of Infamy: The “Field Mattress” Reborn”