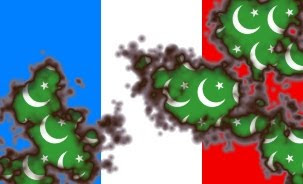 In the comments on a post from a few days ago, our French correspondent Robert Marchenoir had some choice words to say about France which are worth reproducing here. I’ve combined and adapted two comments to make the following post:

The signs of dhimmitude are all over the place in France. The Minister for immigration, integration and national identity Eric Besson, a former Socialist, has just said, in front of an immigrant audience, right in the middle of a Muslim suburb next to Paris:

“France is neither a people, nor a language, nor a territory, nor a religion, it’s a conglomerate of peoples who want to live together. There are no indigenous French, there is only a France made out of miscegenation.”

How more insulting can you get towards the French people and their history ? How contemptible is that ?

Here is the original report of Eric Besson’s quotation: Le Parisien (in French).

Le Parisien is a working-class / lower-middle-class quality national newspaper. It’s mostly politically neutral, with a center-right leaning if you really must name one. It does not campaign against Islamisation, any more than the other mainstream newspapers. However, it’s one of the rare places in the French MSM where everyday signs of non-terrorist jihad are not systematically covered up.

This was a surprise appearance by Eric Besson, in a public library at La Courneuve. He was invited by Collectif Banlieues Respect, an immigrants’ NGO. His arrival was unannounced, there was no visible police presence, and only thirty-odd people were in the audience, mainly Arabs and Africans.

Le Parisien quotes some Moroccans in the audience who were “pleased to see the minister of immigration come to La Courneuve”, and said “they had learned a lot”. (Yeah; me too. I have just learned that I don’t exist…)

However, even such a grotesque abasement from a member of the government was not enough to satisfy the professional subversives from the local Muslim intellocracy and political mafia.

According to Le Parisien, Nacira Guenif, who teaches sociology at Paris XIII university, said that Eric Besson “did not answer the questions that were put to him”. And city councillor Khaled Benlafkih dismissed the whole event as a “media stunt”.

You can also read the 871 comments (at the time of writing) on the patriotic website François de Souche, which picked up the quotation, lost down in the eighth paragraph of Le Parisien article. The headline at François de Souche reads: “Eric Besson: the French people does not exist”.

6 thoughts on “The Non-Existent French People”