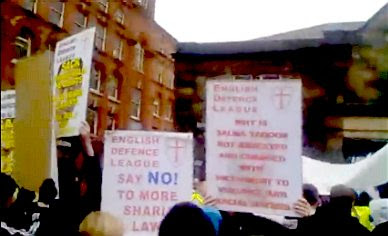 The EDL demo finally made it into the MSM, but the report is very thin:

About 1,500 English Defence League (EDL) supporters are at a rally in Stoke-on-Trent to protest about alleged Islamic extremism.

Up to 300 members from the group Unite Against Fascism are also in Hanley, police said.

Staffordshire Police said more than 600 officers were keeping the peace between the groups.

Five people have been arrested for public order offences. Supt Dave Mellor said the disorder had been sporadic.

Notice that “Islamic extremism” is “alleged”. They don’t call it “Al-Beeb” for nothing.

5 thoughts on “The BBC Notices the Stoke Demo”