When I was a little kid, my big brother would take it out on me whenever one of our parents punished him. It didn’t matter whether I shared any responsibility for the crime that got him in trouble — as soon as we were alone in the room: WHAP!

That’s what the cultural Left reminds me of. Islam is the Big Daddy, and not to be trifled with. We kuffar have learned that Muslims have a tendency to slaughter infidels, especially infidels who do anything that seems to insult Islam. For those who somehow remained unaware of their subservient position, the murder of Theo Van Gogh was a belated wake-up call: Don’t mess with Big Daddy.

So Little Brother Christianity makes a nice scapegoat. When Big Daddy humiliates you, turn around and sock it to the Christians. WHAP!

There — don’t you feel better now?

Here’s an épater-les-bourgeois example of this dynamic at work in the Flemish city Bruges (Brugge), as described in an excerpt from “Diary Thoughts” (16) by Benno Barnard, and translated by our Flemish correspondent VH:

Thursday: (If Islam allowed humor, the Swiss Muslims would have build a mosque in the form of a cuckoo clock: no better symbol of the demographic jihad but that bird)

The Brugge Mariastad [“Bruges Maria-city”] committee wants to close down an exhibition that mocks Christianity with great enthusiasm — or at least mocks the relationship between religion and power. The committee takes particular offense at a fairground stall, created by a certain Peter Puype, where visitors may smash plaster statuettes of Mary by throwing stones at them. How the artist will enjoy all the attention! His manifestation of cultural self-hatred is dripping with the adolescent desire to insult the good old little bigots, attached to their comforting and totally harmless Mary-worship, as brutally as possible. 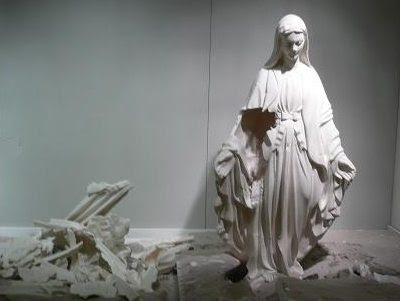 It would have been more heroic to manufacture little plaster figures of Muhammad, my dear artist, and have those dashed into to pieces — also not very delicate, but at least you would then be insulting a real enemy, doubling the offense first by depicting the Prophet and then by destroying him. And then the exhibition would have been closed down by the authorities in a blink of an eye, so you would have become a martyr for free speech… and in an unexploded condition!

In a side note, Geert Wilders’ political party is demanding that the Dutch nationality of the murderer of Theo Van Gogh be removed. From Algemeen Dagblad, also translated by VH:

“The Jihad-butcher is not worth Dutch nationality and it is the moral duty of the government to ensure a rapid denaturalization,” PVV parliamentarian Sietse Fritsma said. Under the new law, a Dutch citizen who also has another nationality will lose Dutch nationality after a conviction for terrorism. Mohammed Bouyeri was sentenced to life in prison. He was the first Dutchman who has been convicted for a murder that was committed with the intention of terrorism.

5 thoughts on “Socking it to the Virgin Mary”