How far the mighty have fallen in just a year. This is indeed a Fickle Finger of Fate moment for The One They Used to Be Waiting For:

Indonesian authorities said Monday they are considering a petition to tear down a statue of US President Barack Obama as a boy, only a month after the bronze was unveiled in Jakarta.

The statue of “Little Barry” — as Obama was known when he lived in the capital in the late 1960s — stands in central Jakarta’s Menteng Park, a short walk from the US president’s former elementary school. 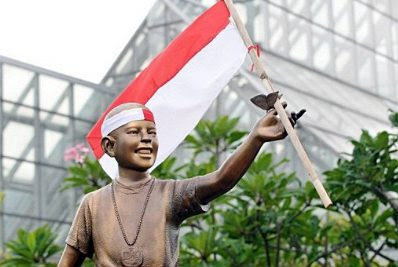 Critics say the site should have been used to honour an Indonesian and 55,000 people have joined a page on social networking website Facebook calling for the statue to be removed.

I suppose I’m going to have to break down and get on Facebook. So many tantalizing subjects in this medium. I’d love to see this one, for instance. The page has 55,000 folks at the moment but wait until the news about his 180 degree turn on America’s domestic policy is more widespread. For example, when he gives his State of the Union address. Obama is going to resemble more and more the Bush he’s been hiding behind for a year.

At any rate, don’t underestimate the power of Facebook. These folks have the bureaucrats scrambling:

“We’ve been discussing for the past two weeks what to do with the statue… whether to take it down, move it elsewhere or retain it. We’re finding the best solution,” Jakarta parks agency official Dwi Bintarto said.

That statement is bureaucratese for “please don’t hurt us. We’ll try to please everyone on this. Move it? Take it down? Retain it? How about the nucular option, i.e., wait until the people topple it for you?

Here’s the crux of the problem for everyone, including Himself:
– – – – – – – – –
Political popularity is an evanescent thing. The Europeans still love Obama, but for the Indonesians, that’s not the case:

Members of the “Take Down the Barack Obama Statue in Menteng Park” group on Facebook say Obama has done nothing for Indonesia.

“Barack Obama has yet to make a significant contribution to the Indonesian nation. We could say Obama only ate and s (expletive) in Menteng. He spent his subsequent days living as an American,” the web page says…

There goes the respect, Mr. President. So what are you going to do about your plans to visit now?

Obama said in November he would visit Indonesia this year along with First Lady Michelle Obama and daughters Malia and Sasha.

Perhaps discretion is the better part of valor here, sir. Not that valor was ever touted as one of your strong points. In this case, however, looks like you’ll save yourself some embarrassment if you just stay home.

Given the cost of your trips, your fellow Americans would certainly appreciate the savings we’d see if you went with Plan B and just hung around the White House instead. You and the family could eat Indonesian take-out food and watch some travel documentaries in your very own White House theater.

Frankly, we’re finding it hard to afford your jet-set life style. Not that you’re any worse than Congress when it comes to junkets. They cost us more than a million for their trips to Copenhagen. The good Lord only knows what we shelled out for your entourage to the fake Climate Change summit.

4 thoughts on “Obama’s in Deep Doo-Doo: Statues Are Falling Already”