We don’t get many mujahideen commenters here at Gates of Vienna, so the comment by Bilal Ahmed on last night’s post stood out:

Go to hell with your fanaticism, Islam would rule Europe again, and this time conquest would be not only of region but hearts. Europe would be Eurabia one day. We are the religion, mankind is embracing most fast. When fanatics like you open blogs like this, Jesus (pbuh) laughs on them.

Mr. Ahmed is from the city of Lahore in Pakistan. I took a look at his profile, and this is what he says about himself:

I am a poet and fiction writer in my national language Urdu. My education is LL.B. and i am a Lawyer. I love to share my thoughts and ideas through discussion forums and blogs.

He has two blogs listed on his profile, “America’s War Crimes”, and “American War Crimes After 9/11”. The former has no posts, and the latter has several, but they are all from the same day in November of last year. His longest post seems to be an attempt to discredit that the famous video in which Osama Bin Laden praises the 9-11 attack and describes with glee how the results exceeded his highest expectations.
– – – – – – – – – 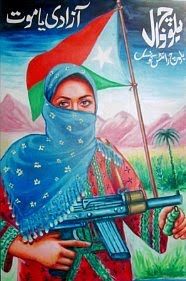 While I was poking around through various material related to Islam in Pakistan, I came across the poster shown at the left. It reminded me that the region known as Balochistan (or Baluchistan) boasts a vigorous independence movement.

Balochistan represents a distinct ethnicity which is spread over southwestern Pakistan, southeastern Iran, and southern Afghanistan. The Balochs have long agitated for their own state, and Balochistan separatist movements have been suppressed in both Iran and Pakistan. The flag displayed here represents one variant of the Balochistan national flag.

As you can see from the poster, traditional revolutionary iconography remains much the same, no matter the cause or the ethnicity. In this particular case, however, it’s notable that the female freedom fighter is veiled, indicating that the Balochi independence movement has not abandoned its adherence to Islamic law.

This is yet another instance of the successful adaptation by modern Islamist movements of the revolutionary ideologies and techniques of the 20th century. The mujahideen have learned well the lessons of Trotsky and Lenin and Che and Hitler without ever having to abandon their core doctrines, which are still firmly lodged in the 7th century. The methods of the Comrades have proved quite attractive and practical for the 21st-century jihad.

Welcome, readers from Pakistan! May you find much to ponder here at Gates of Vienna.

14 thoughts on “Jesus Laughs On Us”